Fight the fees: 6 things you need to know about checking account overdrafts 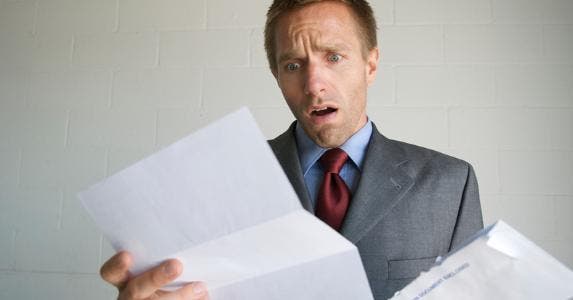 Many of us probably know what it feels like to overdraw a checking account. There’s a particular sinking feeling you get when you see that minus sign in front of your available balance — and the big fees that are sure to follow.

But a little knowledge about how overdraft fees work may make them easier to avoid — and help lessen their impact. Here’s what you need to know.

Overdrafts come down to simple math

The basic definition of an overdraft, also known in the banking industry as an NSF, for “nonsufficient funds,” is simple: “It’s when a customer authorizes transactions that exceed their balance,” says Nessa Feddis, senior vice president for consumer protection and payments at the American Bankers Association, or ABA. 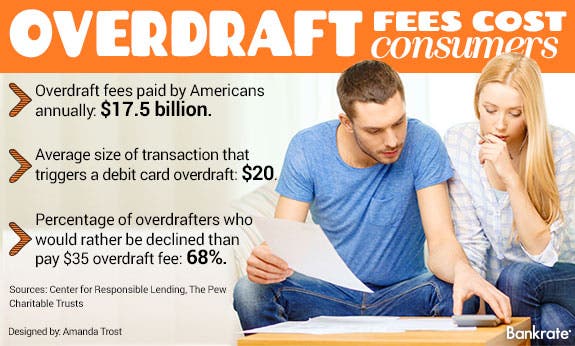 Overdraft fees can add up quickly

While bounced checks still cause problems for consumers, the most common way overdrafts happen is through debit cards and ATM transactions, which, combined, account for 46 percent of all overdraft fees, according to the Center for Responsible Lending.

When a debit card overdraft happens, the bank can either:

The second option, known as “courtesy overdraft” or “overdraft protection,” charges bank customers a fee that averages $32.74 for each purchase the bank covers in this way, according to Bankrate’s most recent annual checking study.

Those fees typically come in bunches — the average “overdraft event” costs consumers $69, according to research by The Pew Charitable Trusts.

One way to think about overdraft protection is as a short-term loan — with a really, really high interest rate. Figured on an annual basis, overdraft protection’s interest rate averages around 5,000 percent, according to Pew’s research, although the Consumer Financial Protection Bureau, or CFPB, has put it as high as 17,000 percent. That’s a much higher interest rate than you’ll see even at payday lenders, says Susan Weinstock, director of the Consumer Banking Project at The Pew Charitable Trusts.

“It doesn’t seem to jibe with the amount of risk the bank is taking in providing that loan, if you look at how much the fee is,” Weinstock says.

In fact, in response to criticism over this issue, many banks have put in place a threshold amount a purchase has to meet before triggering an overdraft, so that, say, buying a cup of coffee won’t trigger a $33 overdraft fee, Weinstock says.

Your final overdraft tab may vary

Your checking account’s terms, especially the order in which your bank charges transactions to your account, can have a major impact on what you’ll pay.

Banks have the ability to order your transactions in two basic ways:

Largest-to-smallest: The bank uses your available balance to cover the biggest transactions you made on the day you overdrew, charging you an overdraft fee for the purchase that overdraws your account and every smaller purchase after that.

“It’s really hard for a consumer to manage their account responsibly when the bank, in the background, is doing things that actually increase overdraft fees,” Weinstock says, which is why the CFPB may soon take action on restricting the practice.

The penalties for not paying up are severe

It’s not uncommon for one overdraft incident to result in an avalanche of fees that pushes the victim’s checking account balance hundreds of dollars below zero, which can make such incidents very hard to recover from.

Also, if a negative balance sits in your account long enough — anywhere from three to 31 days, Weinstock says — many banks will charge an additional fee, called an “extended overdraft fee.”

For many, an overdraft-avalanche is the last time they’ll see a conventional checking account for a long time. Typically, if an account holder can’t pay off the unpaid balance quickly enough, the bank’s next step is to close the account and send a negative report to ChexSystems, a credit reporting agency that gathers information about closed bank accounts, bounced checks and overdrafts, locking them out of a new checking account for at least five years.

“It does push people out of the banking system,” Weinstock says. “Our data show that.”

1. Opt out: Under consumer protection rules, banks have to get your OK before enrolling you for ATM and debit card overdraft protection.

Despite the potentially high costs of opting in, many account holders still do so, says Weinstock, perhaps because they don’t understand what they’re agreeing to.

In two recent surveys conducted by Pew, more than half of the people who had incurred an overdraft in the preceding year were not aware that they had opted into overdraft.

Fortunately, you are free to contact your bank at any time to opt out of overdraft, Weinstock says (so if you haven’t, you may want to go do that right now). Reminder, though: Opting out does not protect you from incurring fees if you bounce a check.

2. Keep closer tabs on your checking account: Many banks offer a variety of tools that can help account holders stay up to date on their balances and avoid overdrafts, says the ABA’s Feddis.

“There are banks that will offer alerts — you can set up an alert so when the balance falls below a certain amount” you’ll be notified, Feddis says.

Online and mobile banking also can help customers check their balance easily, but Feddis cautions that checks written against your account may not show up on your online statement until it’s too late.

You’ll usually pay a fee for such “emergency transfers,” Weinstock says, but it’s usually less than an overdraft fee.