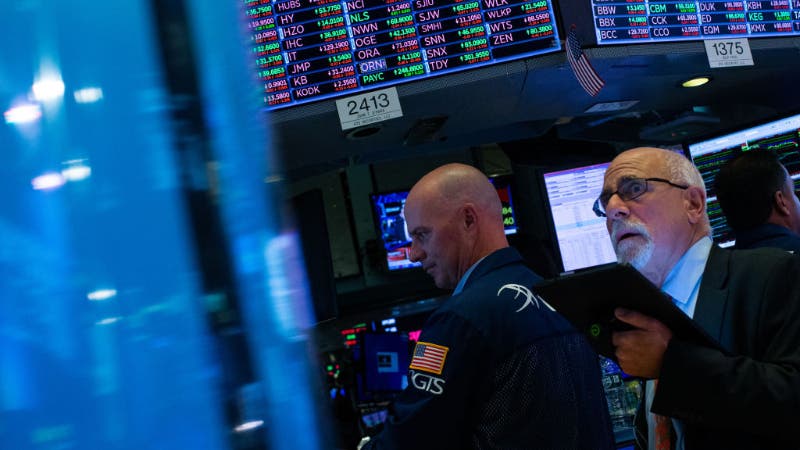 The year ahead will likely still be a strong one for stocks despite recent volatility, but don’t expect the party to last forever, a new poll from Bankrate suggests.

The majority of investing experts (57 percent) believe that returns from equities over the next five years will likely be lower than normal, according to Bankrate’s latest quarterly Market Mavens survey. Nearly 3 in 10 (or 29 percent) of respondents expect returns to be about the same as their historical average, while only 7 percent said they would be higher.

“We are building a bubble in equities,” says Jim Osman, founder and CEO of The Edge Consulting Group. “Ride it while you can, and get off before the music stops.”

The culprit behind this apprehension? Investors are going to be faced with a wide variety of uncertainties, whether it’s the ongoing trade war between the U.S. and China, the upcoming U.S. presidential election or the future of the current economic expansion, which became the longest on record in July.

Those predictions also come on the heels of some wild swings in the markets, after the 10-year, 2-year Treasury yield curve inverted Aug. 14 for the first time since before the financial crisis on fears about slower growth and low inflation. The S&P 500 Index fell that day by about 3 percent. President Donald Trump also whipsawed investors on Aug. 1, announcing that he’d be imposing tariffs on virtually all imports from China. Stocks slid by 2 percent on the news.

“Expect to see a recession and associated bear market within the next five years,” says Ken Moraif, senior retirement planner at Retirement Planners of America. “The market should rise from here over the next year, but then fall and recover.”

The Q3 2019 Market Mavens survey was conducted from Aug. 5-12 via an online poll. Thirteen experts from investment firms and research organizations provided answers. 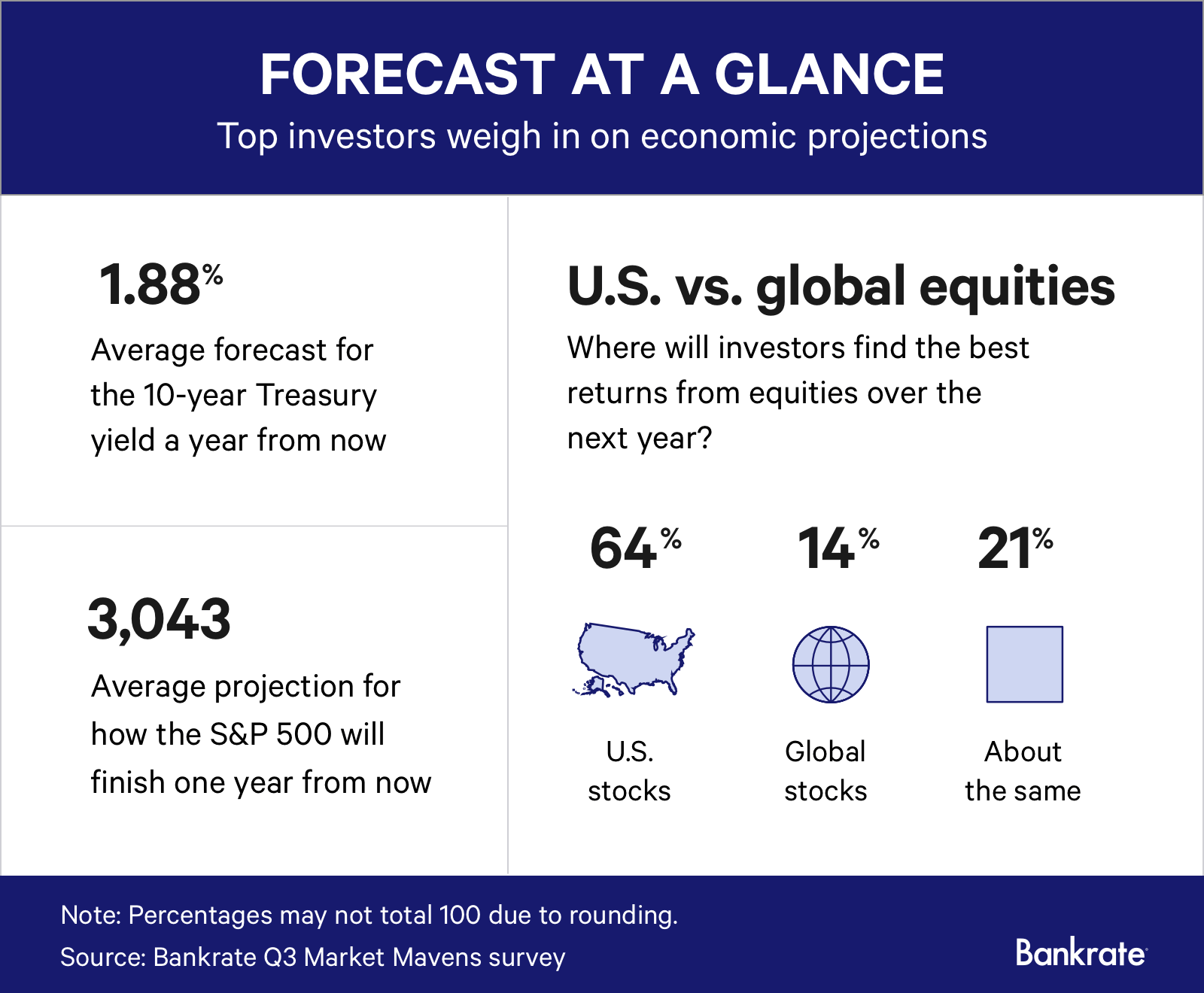 Long-term picture is cloudy, but near term looks strong for stocks

Even amid the apprehension, investors expect the S&P 500 to rise in the near term. The major stock index closed Aug. 12 (when the Q3 survey ended) at 2,883. Market professionals, however, expect it to rise by 5.5 percent to 3,043 over the coming year. That compares with forecasts of just a 5 percent gain during the prior survey period.

As of Aug. 22, the benchmark index has already climbed by more than 16 percent this year, recovering from the December 2018 volatility. On July 26, the S&P 500 closed above 3,000 for the first time in its history, driven by Federal Reserve Chairman Jerome Powell’s signals that Fed officials were willing to cut interest rates to cushion the U.S. economy from any headwinds.

“The U.S. may be slowing,” says Patrick O’Hare, chief market analyst at Briefing.com, “but in a world of extremely low interest rates and heightened volatility, U.S. stocks should retain a relative strength edge due to the deeper liquidity of the U.S. market and the relative security of dividends paid by U.S. companies, which will be in demand for income-seeking investors here and abroad staring at low (and negative) bond yields.”

For these reasons, the majority (64 percent) of professionals are betting that U.S. equities will outperform global stocks. That’s up slightly from the previous survey period, when 6 in 10 professionals favored U.S. stocks.

The Fed’s decision to cut interest rates for the first time since the financial crisis may have helped keep the party going longer, according to some experts. The U.S. central bank on July 31 lowered borrowing costs by a quarter of a percentage point as a form of insurance against any negative effects from the U.S.-China trade war or the global growth slowdown.

“Domestic companies will have the upper hand,” says Wayne Wicker, chief investment officer at Vantagepoint Investment Advisers. “The United States is attempting to spur growth through a combination of fiscal and monetary stimulus strategies, which is probably more effective than pure monetary easing seen in other markets around the world.”

But industry professionals were divided on whether growth stocks (or company shares expected to increase in value rather than pay higher dividends) would provide greater returns than value stocks (or shares of a company that are priced below those of its peers based on an analysis of its fundamentals).

Forty-three percent cited growth stocks, while 43 percent preferred value stocks. Fourteen percent, however, said returns would be about the same.

Experts who preferred value stocks cited a slowing global and domestic economic picture, meaning investors will need to go down a different route for the best returns.

“With the U.S. economy slowing, investors will be looking for safer, more secure types of investments, but I do not believe they will be fleeing to safety positions such as money markets, credit default swaps or Treasuries just yet,” says Dom Catrambone, CEO of Volshares. “A look to value may be what pleases the investor’s eye while they stay invested in the markets for the next year.”

Those who chose growth stocks, however, reckoned that the current bull market is not a force worth messing with.

“A trend in motion is the most powerful trend,” says Marilyn Cohen, CEO of Envision Capital, who said the highest returns over the next year would come from growth stocks.

But most investors’ focus lately hasn’t been on the stock market but the bond market, most notably after the 10-year, 2-year Treasury yield curve — a widely watched recession indicator — inverted for the first time since 2007.

But even as the 10-year Treasury yield extends its decline, most investment professionals believe it’s going to rise from its current level.

When the survey closed, the 10-year Treasury had a yield of 1.64 percent. Most investment professionals, however, say it’ll reach 1.88 percent in the next year. The range of estimates was 1.5 percent to 2.3 percent.

But estimates have dropped off since the prior survey. During the second quarter, investors looked for a 10-year yield of 2.77 percent over the next year. Even during the first quarter, the expectation was 3.04 percent.

“The biggest drivers for stocks and bonds will be, of course, monetary policy, both U.S. and foreign, that is currently in the driver’s seat,” says Robert Brusca, chief economist at Fact and Opinion Economics. “The evolution of the trade war will be important for markets as well. By next August, we should also be in the midst of a clear presidential battle that markets will be transfixed by.”

Biggest factors that investors should pay attention to

Those are the main events to keep an eye on in the year ahead, according to market professionals. The trade war between U.S. and China has created uncertainties for businesses, with some reportedly delaying investments and hiring. The Fed is also going to take the spotlight in the year ahead, with investors focusing exclusively on whether officials will vote for another cut.

“The two biggest factors for investors to pay attention to are the ongoing trade war with China and monetary policy,” says Carter Henderson, portfolio specialist at Fort Pitt Capital Group. “Impacts of trade are driving the Fed to react by cutting interest rates to support economic activity.”

Meanwhile, the U.S. elections are coming up, which will be a prominent event for markets.

“The upcoming elections should be extremely important,” Brusca says. “Of course how (much) depends on who will be running. Trump versus one of the ‘new progressives’ would be an incredible spectacle.”

But even though these uncertainties are clouding the outlook, investors are still largely optimistic about the financial market environment over the next year, says Mark Hamrick, Bankrate’s senior economic analyst.

“The investment professionals responding to our survey remain largely upbeat on the outlook over the next year even amid concerns about the economic outlook,” he says.

“There’s no escaping the reality that we live in volatile times. But one constant is the need for Americans to save for both short and long-term needs, including for retirement,” Hamrick says. “Only by being invested to some degree in equities, including mutual funds and exchange traded funds, can individuals achieve the superior long-term return that’s necessary for retirement.”