Real estate is hot, all right. Home prices are soaring, a real estate mogul occupies the White House, and here’s the latest evidence: Americans say housing is their best bet to make some money.

In fact, for the third consecutive year real estate is the favorite way to invest money not needed for at least a decade, according to a Bankrate national survey. No-risk cash investments are a close second — also for the third straight year — while stocks are relatively unloved, in third place.

The results should have you asking yourself: Do I have the right idea about how to build wealth? Because while a home and a bank account may feel like safe bets, especially among millennials, they do carry risks. You could be leaving money on the table.

“If you have a long time horizon, you will win in real estate,” says Abhi Golhar, a 32-year-old Atlanta-based real estate investor who owns and rents out single-family homes. 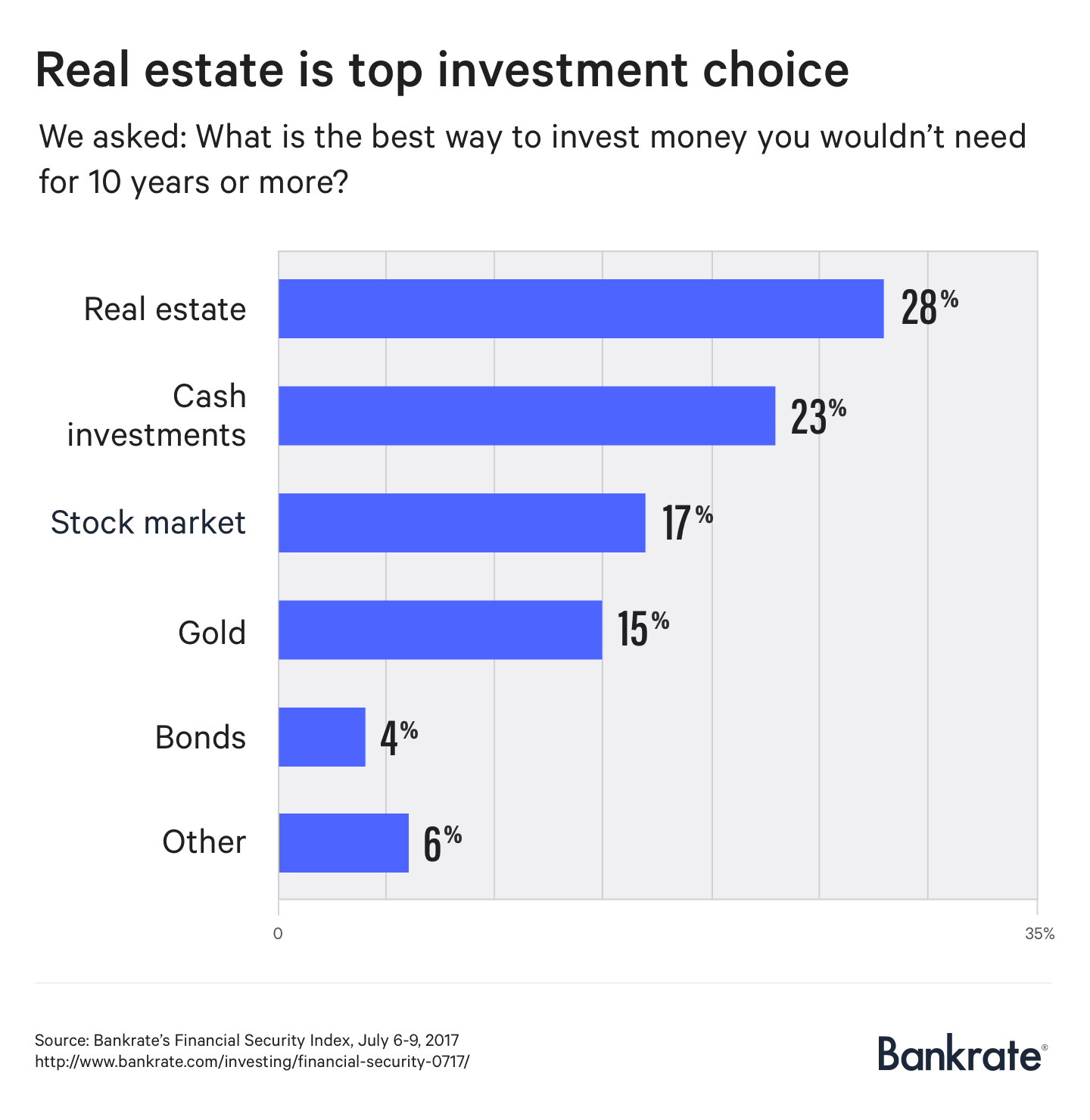 After bottoming out at the end of 2011 following the worst housing collapse in generations, home prices have gone gangbusters recently, climbing back above their record pre-crisis levels. Prices jumped 6.6 percent during the 12 months that ended in May, according to CoreLogic.

Toss in persistently low interest rates, tax goodies that come with owning a mortgage, and the psychological payoff from planting your roots, and maybe it’s no wonder real estate remains popular.

Reasons we ought to re-think that

One study by professors at the London Business School found that housing returned only 1.3 percent per year after inflation from 1900 to 2011, while stocks tended to perform more than four times better.

Homes are costly to maintain and can be difficult to sell in both good markets and bad. During a downturn, there can be so few available buyers that your ability to ask for a higher price is diminished.

And what about stocks?

Stocks, meanwhile, continue to lag as an investment choice, even trailing cash.

The current bull market turned 8 years old in March, making it the second longest-lasting winning streak for stocks since the end of World War II.

“If you look at historical averages comparing stocks and cash, it’s not close,” says Matt Becker, a fee-only financial planner and the founder of Mom and Dad Money.

Over the past 10 years, even including the financial crisis, stocks have returned an average of 8.6 percent per year, far above the earnings for money-market accounts and other cash investments. 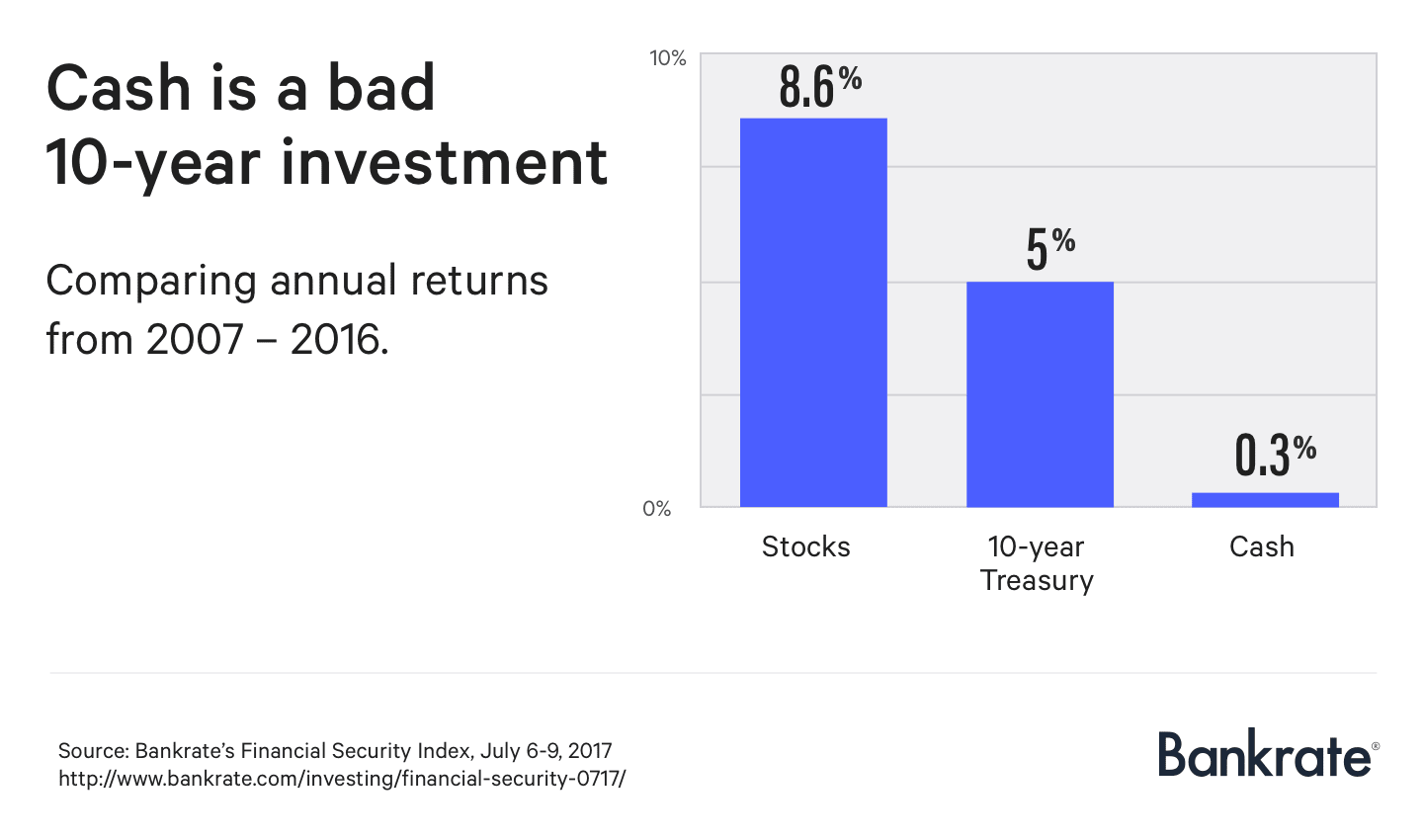 Putting your money into very safe investments can actually cost you money, if you consider inflation. You do need some cash in a liquid account available at a moment’s notice in case of an emergency, but it shouldn’t be your top investment pick.

The millennial money mind turns out to be a bit more complicated than conventional wisdom might have you believe.

“Contrary to the notion that millennials don’t want to buy homes, their preference for real estate as a long-term investment is exceeded only by their counterparts in Gen X,” says Greg McBride, CFA, Bankrate chief financial analyst.

Young adults split their vote evenly between real estate and cash (at 30 percent for each), with stocks trailing far behind (at 13 percent, behind gold). Compare that to baby boomers, who choose stocks second after real estate, with cash third. 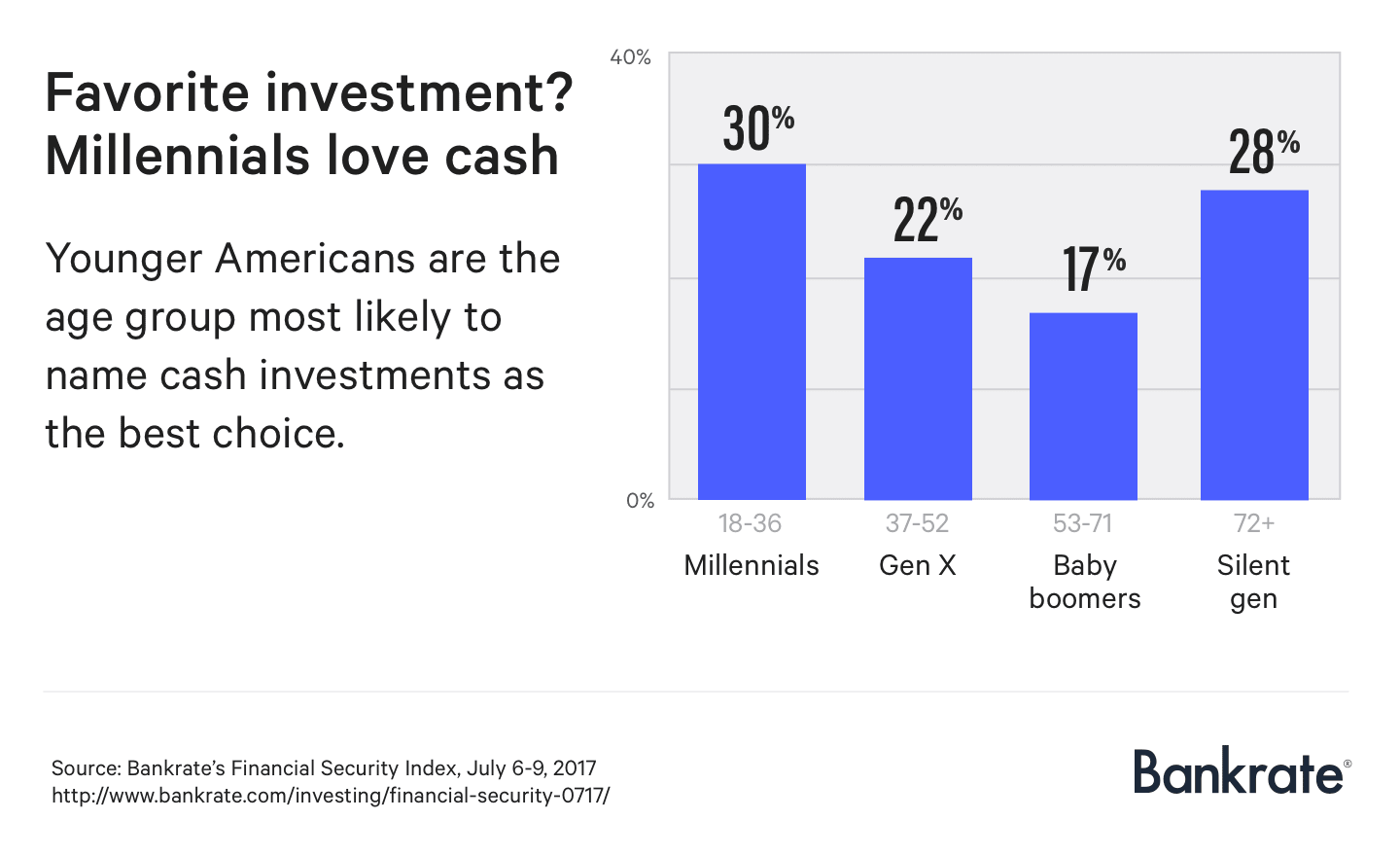 Millennials have years to earn and invest, so why would they seem more eager to play it safe than people who are in or near retirement? Here’s one possible reason: their relative lack of overall wealth compared to their parents and grandparents.

With fewer dollars to play with, millennials are less likely to want to take on risk, even if that means settling for weaker returns.

Regardless of how they would invest, Americans remain confident about their personal finances.

Bankrate’s Financial Security Index — based on survey questions about how people feel about their debt, savings, net worth, job security and overall financial situation — has hit its third-highest level since the poll’s inception in December 2010, despite dropping slightly from the record high seen in June. 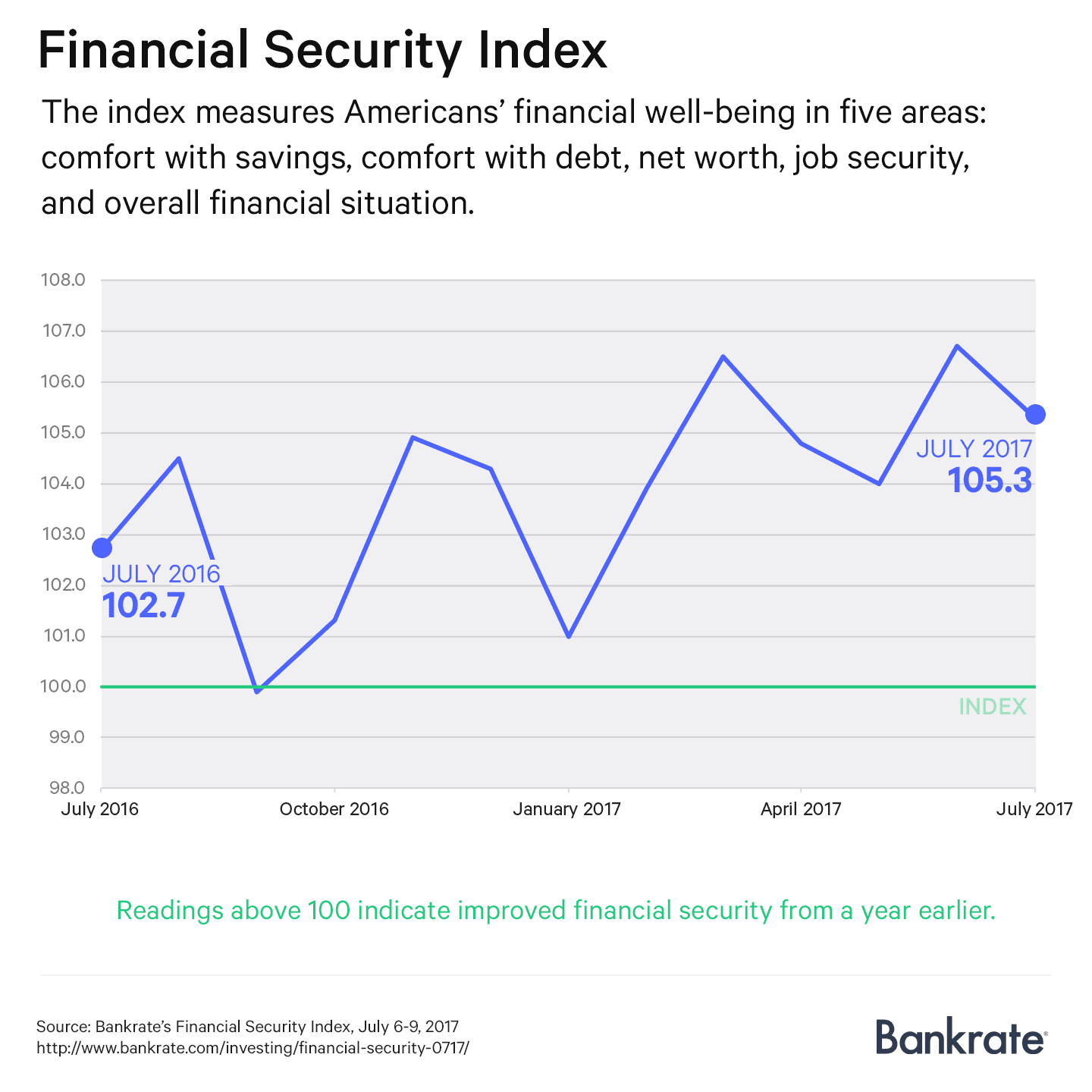 The survey was conducted by Princeton Survey Research Associates International. PSRAI obtained telephone interviews with a nationally representative sample of 1,002 adults living in the continental United States. Interviews were conducted July 6-9, 2017. The margin of sampling error for the complete set of weighted data is plus or minus 3.9 percentage points.