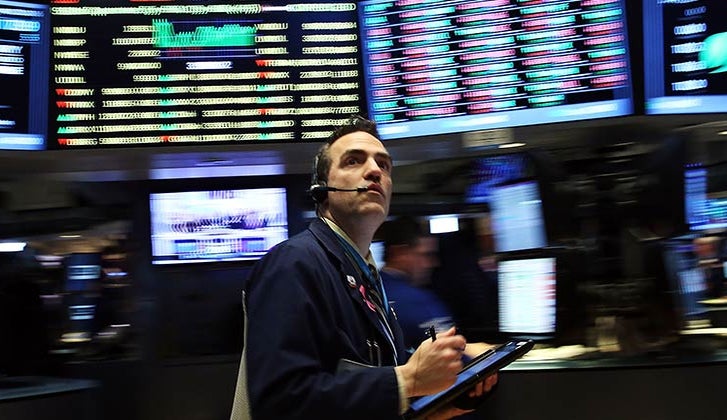 The bull market in stocks, which began in March 2009, should persist at least another year. That’s the belief of the majority of financial markets professionals taking part in the latest quarterly Bankrate Market Mavens survey.

Positive, but modest returns: As 2016 began, the stock market was in a downdraft. But the key averages have since stabilized and moved higher. On average, the Market Mavens have a 12-month forecast for the Standard & Poor’s 500 index, or S&P 500, of 2049. The median — meaning half were higher — is put at 2125, which translates to a gain of 4% from the period when the survey was conducted. 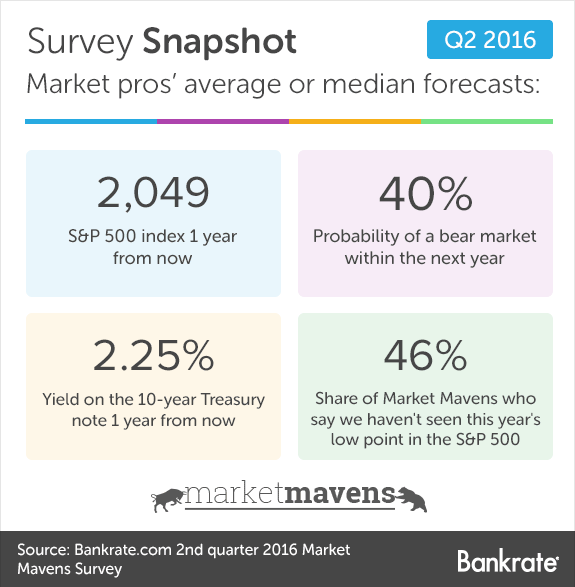 Among the Market Mavens responding:

Keep your seatbelt fastened: Even if the path for stocks is toward higher ground, our panel of experts suggests there could be more volatility ahead. Nearly half of the Market Mavens, or 46%, said we haven’t seen this year’s low point for the S&P 500. Of those, a drop of 12% to 31% was forecast. The benchmark index stood at 2040 when the survey concluded. Still, keep in mind that 54% of the panelists say the S&P’s low for the year has already been seen.

Bear market ahead? When asked about the odds of a bear market in stocks over the next year or so, the average came in at 40%. That’s down from 44% when we asked the question in the 1st quarter of 2016.

“I think the odds don’t favor a bear market, though weakness in corporate profits would be the main reason one develops,” says Chuck Carlson, CEO with Horizon Investment Services.

But Marilyn Cohen, president of Envision Capital Management, in Los Angeles, believes stocks are now rallying within a bear market. “There’s little to no top line revenue growth. Companies cannot grow if all they do is take excess cash, borrow in the bond market and buy back shares,” Cohen says.

The world is flat: There’s a big change from our previous quarterly survey, when the mavens thought the outlook was best for the U.S. market. Now, 39% favor international stocks over the next year, while 39% think the U.S. is the place to be. Favoring the U.S. is Michael K. Farr, president of Farr, Miller & Washington, who says, “While we continue to believe the pace of economic growth will be modest in the U.S., we think that stacks up well against most other countries.”

The remaining 22% say the returns will be about the same over the next year. Among them is Hugh Johnson, chairman and chief investment officer with Hugh Johnson Advisors. “It is difficult to find markets that are meaningfully undervalued, given prospects for earnings and economic growth,” Johnson says.

Growth or value, or both?: Given the age of the bull market, and the economic recovery in the United States, it might come as no surprise that our group of investment professionals favors value over growth prospects. 78% say value stocks should have better returns in the coming 12 months. Why? “Earnings growth may not be robust enough to justify higher EPS (earnings per share) multiples, making it harder for growth stocks to outperform value stocks,” says Don Taylor, president and chief analyst at Emmett Advisers, and a Bankrate columnist. Growth issues received just 11% of the votes and the remaining 11% said the results should be about the same.

The next rate hike: After the spurt of financial markets volatility following the December interest rate hike, the Federal Reserve has been standing pat on monetary policy. But the Market Mavens think there could be another shift in the offing. Half of the respondents expect a boost in the federal funds rate at the June meeting. This includes Charles Lieberman, chief investment officer at Advisors Capital Management, who says, “The Fed’s latest statement was quite dovish, but inflation pressures are clearly rising.”

Looking for something a bit later, 22% think a rate hike looms sometime between September and December. A nearly equal percentage doesn’t think the Fed will move rates until next year or even later.

10-year Treasury yield: Expectations for the benchmark yield are ratcheted down from the previous survey. The median forecast for the 10-year yield is put at 2.25% after recently bouncing around below the 2% level. “We see domestic rates relatively well contained even as the domestic economy continues to slowly grow,” says Brian Rehling, co-head of global fixed income strategy for Wells Fargo Investment Institute. “The global alternatives for yield are very low, and in many cases negative, which should continue to attract capital flows into Treasuries.” Rehling’s own forecast is the same as the median, or 2.25%.

When we asked this question 3 months ago, folks saw the yield at 2.75% a year down the road. Remember that, while the Federal Reserve decides the direction of the benchmark federal funds rate, investors dictate movements in the Treasury bond market.

Bankrate’s 2nd-quarter 2016 survey of stock market professionals was conducted online March 7-17, 2016. Survey requests were emailed to about 50 potential respondents nationwide, and responses were submitted voluntarily via a website.