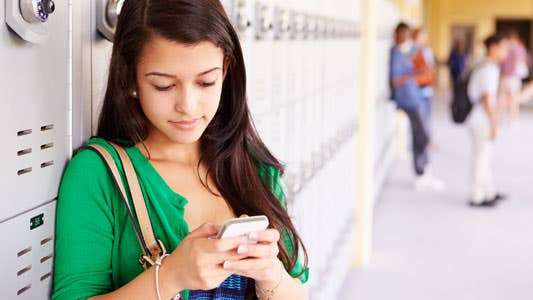 Kids these days: They can’t balance a bank account, but in their pockets are computers more powerful than anything you could have conceived of as a teenager.

In fairness to today’s kids, it’s not their fault they can’t balance a checkbook; only a little more than half of American 15-year olds have bank accounts, according to the Programme for International Student Assessment, or PISA, developed by the Organisation for Economic Co-operation and Development, or OECD.

PISA evaluated about 510,000 15-year-olds in 34 OECD member countries and economies and 31 partner countries. The test measured performance in math as well as reading, science and problem solving. Teenagers in 13 of those countries were tested on financial literacy. The results showed that kids in the U.S. could use some remedial financial literacy education.

American kids scored just below the mean score of the 13 countries tested in financial literacy. The average score was 500; Americans got 492. Students in Shanghai China did the best with a score of 603 points.

Students were tested on five levels of difficulty.

Across all 13 countries, 15 percent of students, on average, failed to show mastery of the baseline financial literacy required for basic functions in life, according to PISA. They floundered at level 1.

“This group of students can at best, recognise the difference between needs and wants, make simple decisions about everyday spending, recognise the purpose of everyday financial documents, such as an invoice, and apply single and basic numerical operations (addition, subtraction or multiplication) in contexts that they are likely to have experienced personally,” according to the OECD report.

Interpret a financial document, an invoice, identifying its purpose in the context of the individual. Students are required to identify financial information by demonstrating a basic understanding of what an invoice is. Calculations are not required.

Interpret a financial document in a complicated situation that is likely to take place in real life. Students are required to calculate the correct amount due, given that the quantity described on the invoice is incorrect. Full credit is given for the responses taking into account the tax change and postage. To get full credit, students need to interpret and use financial and numeric information in an unfamiliar context and solve a financial problem by using multiple numerical operations (i.e., addition, subtraction and calculation of percentages).

Financial products are more complicated than ever, and young people with college loans are taking on huge financial burdens at young ages. Learning about basic investing and banking concepts at a young age will put young people on the path to financial independence. Plus, the consequences of money missteps can last a very long time.

Do you have tips for raising money-smart kids?