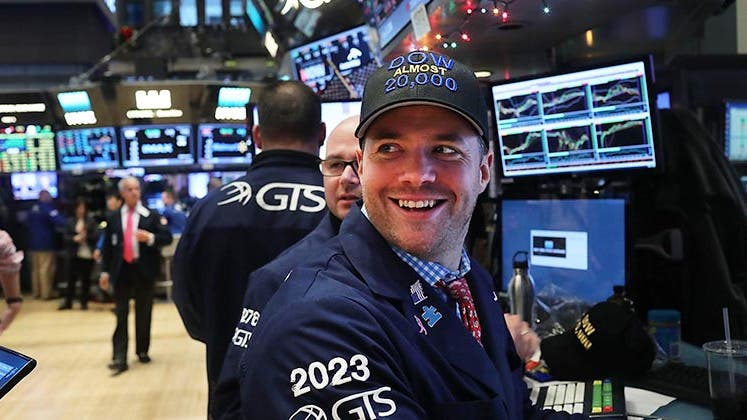 The Dow Jones industrial average hit the 20,000 milestone for the first time at the opening bell on Jan. 25, a record day on the stock market.

But before you break out champagne for the Dow’s milestone, let’s explore what this really means.

The thinking is: Bigger numbers, better economy, more money in your portfolio. But just how true is that?

RATE SEARCH: Put your nest egg to work. Get started by looking for a high-rate IRA money market account.

Roger Wohlner, a financial adviser in Arlington Heights, Illinois, cautions that 20,000 should not be taken as any kind of magic number.

He’d hate to see people decide that some specific high number is the perfect time to start investing. It could go to 25,000, he says, but it could also go to 15,000.

That means that stocks with high share prices have an outsized impact on the Dow, McBride explains. But that’s not the same as companies that are worth more.

The Dow vs. the others

The Dow Jones holds 30 blue-chip stocks. Not the same 30 as it started with – only General Electric remains – but always 30.

The Dow index companies – large, financially sound and long-established — are meant to represent every major market sector. Most are household names.

In 1923, the Composite Index of Standard & Poor began tracking a handful of stocks and expanded until in 1957 it became the S&P 500. These 500 stocks are the country’s most widely traded and give an accurate gauge of medium to large U.S. businesses.

Their ups and downs can give you a good idea of how the U.S. marketplace is performing.

The Nasdaq is an index as well as a stock exchange, created in 1971. The Nasdaq Composite Index follows all 3,000 companies that trade on the exchange. Many are tech-related, but also financial, consumer, bio-tech and industrial.

RATE SEARCH: Get the most from an online interest checking account that meets your needs.

A properly diversified portfolio is your best friend.

You may not hold the Dow’s precise portfolio of 30 individual stocks – which includes some of the nation’s biggest companies. Some, like General Electric, are long-established firms. Others, like Amazon, are much newer.

But there’s an excellent chance you do hold many of them if you’re invested in an index fund of large-cap U.S. stocks. Take Vanguard’s 500 Index Fund. The 10 largest holdings in this mutual fund include six Dow stocks: Amazon, Apple, General Electric, ExxonMobil, JPMorgan Chase and Microsoft.

Other large-cap stock funds that specialize in financial services or tech also hold these same companies. So if you invest in index funds, no need to panic about missing out on the Dow’s spiking value.

What does a high Dow number mean for the global economy? Maybe not that much.

“People can’t take their collective billions of dollars out and put the cash in mattresses,” says Kevin Stophel, a financial adviser in Chattanooga, Tennessee. Instead, he explains, “money migrates around the planet.”

People move their money from places of less stability – Europe, South America – to places of more stability, such as the U.S.

When people invest in what they see as a higher-quality financial market, it helps to drive stock market gains. A stronger Dow could mean that other economies are not doing as well, which could reflect how fragile the global financial system is.

People tend to retire in bull markets, says Sri Reddy, head of full service investments for Prudential Retirement in Hartford, Connecticut. But the Dow should not change your investing strategy or signal that it’s retirement time.

“That is the wrong thing to do,” Reddy says.

Cashing out on a market high just because you turned 65 is a mistake – you might still have another 10, 15 or 30 years of retirement to fund.

“The stock market, whether it’s the Dow or the S&P 500 or another index will achieve new highs,” Reddy says.

In other words, buy and hold. Stay the course. Don’t cash out. And don’t freak out.

“You never know when the peak will be,” Reddy says.