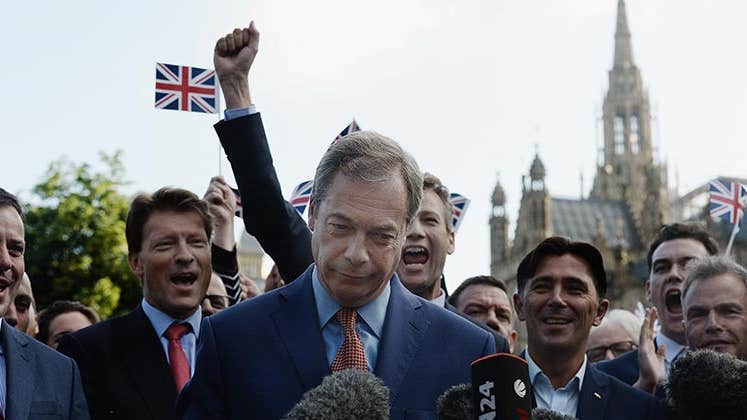 Independence Day fireworks went off a little bit early and came from the most unlikely of sources: The United Kingdom.

Defying prognosticators and the establishment, U.K. voters effectively said “enough already” to a decades-long march of globalization. In a sense, those voices are similar to many of those who have shouted support for Donald Trump and Bernie Sanders.

Financial opportunities amid the Brexit drama

In good times and bad, there are always moneymaking opportunities for consumers, borrowers, investors and savers. I’ve seen it time and time again, including in October 1987 when the Dow Jones industrial average fell 23% in a single session. People waded in during the following session and made money. They were rewarded for going against the grain. Amid the grim decline in housing prices in recent years, plenty of investors bought houses at fire-sale prices — and profited.

So how could the Brexit drama help us financially? The flight to quality — when investors move their money from higher-risk investments to safer ones — has given a lift to the bond market, where prices go higher and yields go lower. If current low mortgage rates hold, it could help ignite a boom in mortgage refinancing.

“While the specifics will take months at a minimum to understand, an EU recession has likely been triggered.”

With the global outlook for the economy seen at risk, oil prices should remain lower, helping drivers continue to save at the gas pump. Gold typically benefits when fear is running higher and that was certainly in play during the downdraft in stocks.

With the strength of the dollar and weakness in the British pound, travel to the U.K. could become cheaper, which provides a terrific opportunity for American tourists wielding dollars.

Finally, with every downturn comes a turn in stocks. It’s too early to make that call after the recent pullback, but wise investors always step in when others are fearful and selling. Anyone who bought stocks in March 2009 did so when the key averages bottomed out. That set them up for the strong rally, which continued through the closing high for the market in May 2015.

If you had high hopes for the stock market this year, you’ve been fully disappointed, especially after the sudden downdraft on Friday. The big ups and downs and have returned the benchmark S&P 500 index to where it began the year. It reminds me of the 1970s hit song recorded by the British singer Maxine Nightingale, “Right Back Where We Started From.”

Year-to-date through Friday, the S&P 500 was slightly negative but essentially unchanged from where it began on the first trading session of the year. That’s even after Friday’s 3.6% drop.

As he reacted to the Brexit vote, which he called “shocking,” Michael K. Farr, president & CEO with the Washington, D.C.-based investment firm Farr, Miller & Washington, wrote in an email: “While the specifics will take months at a minimum to understand, an EU recession has likely been triggered. The U.S. Fed is now on the bench — if not considering ways to add additional stimulus.”

What to watch for this week

The first half of the year comes to a close in the coming days. We’re transitioning into 2016’s closing act, which will no doubt provide more drama. If there’s been one sure bet on the global economy over the past 5 years, it’s been that growth expectations are consistently downgraded. That string of disappointments will certainly end some time, but the Brexit vote has helped keep uncertainty in play.

With the European Union referendum behind, the November presidential election adds an American brand of uncertainty to the economic outlook.

This week, we’ll get updates on:

Looking ahead, estimates from Federal Reserve banks in New York and Atlanta project second-quarter growth at 2.1% to 2.6%. That looks much better than the previously reported increase of just 0.8% for the first quarter.

While much of the focus for the GOP will be on the rift between the party faithful and Donald Trump, it will also be fascinating to see if he chooses a career politician with significant Washington experience, like former House Speaker Newt Gingrich, to round out the ticket.

Meanwhile for the Democrats, some of the speculation surrounding Hillary Clinton has been that she could turn to Sen. Elizabeth Warren as her running mate. While that could benefit Clinton by appealing to Bernie Sanders supporters, it would counter Clinton’s image as being friendly to Wall Street and the financial markets. Warren supports the idea of breaking up big banks.

Our latest Financial Security Index highlights the good news/bad news about saving. The share of Americans who have saved 6 months or more of expenses has reached the highest level in 6 years at 28%. On the other hand, another 28% of Americans have no savings at all.

I asked my colleague Greg McBride, CFA, Bankrate chief financial analyst, about the one bit of advice he’d give to people to jump-start their saving. Here it is: “Most Americans are paid every other week, meaning there are 2 months during the year when they’ll get an ‘extra’ paycheck. They should stash those paychecks away in savings, either starting a new account or adding to the one they already have.”

Figure out when your “extra” paycheck is coming and be prepared to add to your savings. Oh, and follow Greg on Twitter!

One thing I hope to do on a regular basis here is share some lessons from my own financial life. Of course, I promised my wife I wouldn’t share too much.

One of the most basic things my colleague Greg McBride and I focus on is the importance of saving money. About 30 years ago (I’m in my 50s), my employer at the time began offering a 401(k) plan. It was a time when some firms also offered pensions, which have mostly gone by the wayside (sadly).

At the time, I mentioned to my wife that the company was providing a modest match for the 401(k). My wrongheaded thinking immediately was that we could use the money elsewhere and we didn’t need to take advantage of the opportunity. She said we shouldn’t leave any money on the table, so we chose to save.

It was one of the best decisions we could’ve made. That relatively small portion of my income has grown to a substantial amount now. It will be nice to have when retirement time eventually rolls around. If I had one piece of advice for all young workers, it would be to take advantage of any retirement savings opportunities you can. Your golden years will arrive much quicker than you think. Take it from me!

Finally, I want to hear your questions and concerns about the economy, business, politics, whatever is on your mind. I’d like to feature some of your questions in future blogs.