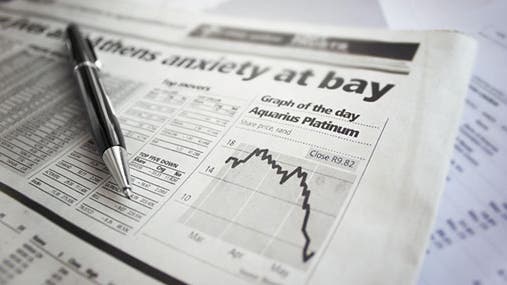 When the stock market shoots up for reasons seemingly divorced from reality, investors get nervous. Like an unpredictable drunk person, the stock market may keep partying, may lurch unsteadily for a while, or it might just pass out in the kitchen.

With market indexes near all-time highs, should investors be concerned about a coming correction? No, say some experts — at least not based on the fundamental values of companies. In the current market, stock prices don’t appear to be overvalued, says Scott Wren, senior equity strategist at Wells Fargo Advisors.

“I might say the market is a little ahead of itself. I think we’ll be a little higher than this by the end of the year — not a ton but a little,” he says. “I think you will have an opportunity to buy stocks below levels where they are now at some point this year, but I don’t think the pullbacks will be that severe and will be very quick.”

It’s nearly certain that there will be a correction at some point in the future. That’s just the way it works, says Peter Lazaroff, CFA, portfolio manager at Acropolis Investment Management in St. Louis.

“Historically, markets experience a 10 percent or greater correction once every 12 months, so a correction should not come as a big surprise,” Lazaroff says.

What can make a correction more or less likely to happen depends how market participants feel about stock prices and what they think will happen to prices in the future. While investor sentiment does play a large role, the actual value and earnings of a company underpin everything in the end.

“I don’t think valuation is an impediment at this point. Stocks are no longer that cheap, but they are not expensive either,” he said on the call. To illustrate, he cited the price-to-book ratio of the Standard and Poor’s 500 index is nearly 2.4, which is in line with the long-term historical average. In 2007, the index traded at three times book value, according to Koesterich.

Price-to-book is one way of figuring out if stocks are priced fairly or are under- or overvalued. It compares a company’s stock price with the book value on the latest quarterly balance sheet. It’s calculated by dividing that equity balance, or assets minus liabilities, by the number of shares outstanding.

Of course no valuation method is foolproof or the final word on price. On a minute-by-minute basis, the market as a whole is seeking information about prices from every angle: corporate earnings, economic data, new products and scientific discoveries, to name a few.

“The market for stocks is a price discovery system and therefore is subject to inaccurate pricing for prolonged periods of time. A constant flow of information on a multitude of factors makes it difficult for the market to reach equilibrium and to stay there,” says Michael Alexenko, CFA at Royal Asset Managers in St. Charles, Ill.

An unfortunate trap that snares many individual investors is relying on the price of an asset to determine its appropriateness as an investment.

Investors tend to flock to stocks that are popular and therefore pricey, and that can limit their returns. “No factor is more important in predicting future investment returns than the price you pay for an investment,” says Lazaroff.

No one can predict the future

Many experts say we have not necessarily reached the top of the stock market, but no one would bet their life on it. Predictions tinged with uncertainty are the name of the game, and that’s why waiting for the perfect circumstance can derail investing plans over the long term.

“If you have money you eventually want to put in the equity market, I think you need to be putting at least a third in now. I wouldn’t hesitate to do that at all. I think sitting on the sidelines is a mistake,” says Wren.

“When people sit on the sidelines and they say, ‘Well, I’m waiting for a pullback,’ when that happens, they get gun-shy and don’t do anything,” he says.

Be honest with yourself. If you weren’t selling secondhand clothes on eBay to capitalize on the low in 2009, you won’t buy on any pullbacks this year. Bite the bullet, and start dollar-cost averaging into the market.

“For investors with longtime horizons that are underweight in their equity exposure or just starting to invest, systematically dollar-cost-averaging into the market is a prudent strategy,” says Lazaroff.

Buying a little bit of an investment on a regular basis is known as dollar-cost averaging. Rather than assume stock market risk by betting the farm on one day being the best time to buy, you split the difference over a number of weeks or months — or in the case of 401(k) plans, even years. Over time, the purchases will be made at high and low points, which average out to somewhere in the middle.

While experts do expect that stocks have room to move higher in 2013, investors have to base their decisions on their personal goals and risk tolerance. A thoughtful investing strategy should balance all kinds of possible threats to an investor’s portfolio — of which a possible dip in value is only one.