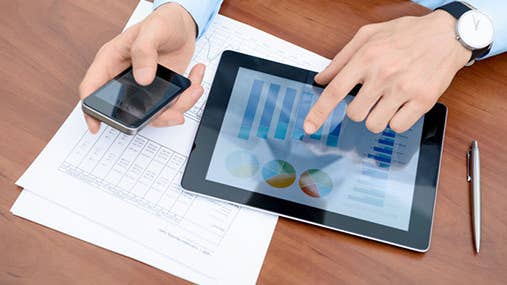 A hot stock isn’t always the best choice. Sometimes, it’s the one with reliable dividend growth.

Overlooked sectors with rising dividends such as high-tech, eurozone pharmaceutical and mining stocks pay good dividends and offer some long-term stock-price growth, too. They may even end up trumping usual income-producing sectors like health care, utilities and telecommunications.

After all, the Standard & Poor’s 500 index currently yields only 1.97 percent on average, so investors are clamoring for higher dividends. Below are some unexpected and beaten-down sectors with stocks that mostly pay dividends of more than 3 percent and also offer good growth potential. They can be solid choices for income-hungry investors.

Putting dividend growth into the mix gives investors an extra income kick because they make more money over time, says Cliff Demarest, managing principal of Consilium Wealth Advisory LLC, in Richardson, Texas. Along with rising dividends, stock growth makes up the other part of the total return equation, giving investors a one-two punch.

But there are other good investing reasons for choosing rising dividend stocks. They provide much-needed ballast when the stock market becomes volatile, Demarest says. And with five-year Treasuries — a favorite of risk-averse investors — yielding 1.6 percent in the first week of July, these stocks are especially appealing.

Josh Peters, editor of the Morningstar DividendInvestor, agrees that rising dividend stocks do a better job driving total return. He looks for stocks with established track records of rising dividends. “That way, you know what you’re buying,” he says.

Take technology kingpin Apple Inc. Though it began paying a dividend last year, it’s still too early to call it a dividend play, despite its hordes of cash, Peters says. “Why not buy a different stock with a long, strong track record of paying dividends?” he says.

Technology. Technology is a little-known but growing area for finding rising dividends, Demarest says. In the 1990s, few high-tech players paid dividends. These days, big companies like Hewlett-Packard and IBM not only pay handsome dividends but also are increasing payouts.

The reason is they are sitting on billions of dollars in cash, leaving lots of extra money for dividend payments. For example, Microsoft Corp. yields 2.7 percent, raising its quarterly dividend 15 percent last year.

Tech giant Intel Corp., which yields 3.9 percent, has hiked its dividend every year since 2000. Peters likes Intel because it has carved out a good competitive position in semiconductors and manages operating cash flow well.

Banks. Following the financial crisis in 2008, bank stocks are still beaten-down, Demarest says. “It’s the only sector selling below 2007 highs,” yet banks are becoming healthier, he says. Some stocks such as Wells Fargo & Co., which yields 2.8 percent, cut its quarterly dividend only once during the downturn, he says. Wells Fargo also has the firepower to increase its dividend over time as the economy recovers.

Community banks are also a good place to find juicy dividends, though they do take extra research, Demarest says. Kentucky-based Community Trust Bancorp Inc., which yields 3.3 percent, has increased its quarterly dividend for at least a decade.

European consumer staple and pharmaceutical companies. Eurozone troubles have hammered stocks there. The result is that big, profitable global companies, such as those in these two sectors, now offer tempting dividends and exposure to fast-growing emerging markets.

“Also, global dividends, such as those paid by European companies, better diversify your portfolio,” Demarest says.

You also can buy stocks in European-based companies. Take consumer goods player Unilever NV, which yields a quarterly dividend of 3.5 percent and has hovered around 3 percent for the past three years. This Dutch company has strong products, taps into emerging markets and has been recently growing its dividend, Demarest says.

The Swiss pharmaceutical player Novartis AG yields 3.6 percent and has a strong pipeline of new drug compounds, along with strong annual dividend growth, he says.

Mining firms. For the past few years, mining stocks have performed poorly, says Nicholas Santiago, president and CEO of the Tampa-based research and consulting firm InTheMoneyStocks.com. However, they are ripe for rising dividends when global demand kicks in again.

Gold is the first place to look. For example, Colorado-based Newmont Mining Corp., with gold mines in seven countries, has a 5.2 percent dividend and has mostly increased its quarterly dividend over the past 13 years. Barrick Gold Corp., a Canadian gold and copper producer, also has a large gold mine portfolio and yields 5.8 percent. Currency shifts can affect these stocks, but they also can gain momentum when inflation returns, Santiago says.

The current housing rebound can drive copper prices higher because the shiny metal is used in plumbing and elsewhere, Santiago says.

To be sure, copper stocks also have long-term growth potential along with good dividends. For example, Southern Copper Corp., with mines in Central and South America, yields 3 percent. Freeport-McMoRan Copper & Gold Inc., which has five corporate segments around the globe, has a 4.5 percent yield.

The beauty of these stocks is they own tangible assets, Santiago says. The only downside is that some companies, such as Freeport-McMoRan, lower their yields when demand slides. So, investors looking for predictable income should look elsewhere.

For now, gold and copper mining companies offer surprisingly strong dividend yields, Santiago says. “Avoid sectors that everyone is looking at,” because they can lose value quickly when the stock market shifts, he says.