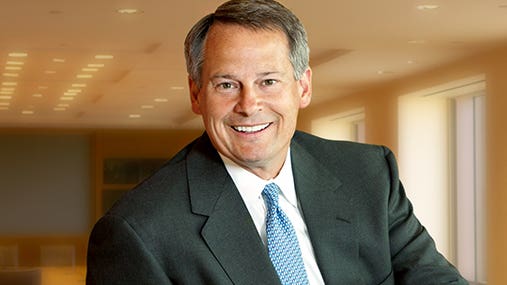 Quick question: Who is the CEO of Charles Schwab Corp.? If you guessed Charles Schwab, you’d be wrong. But you’d have plenty of company. Schwab started his company in 1971, but for the past five years the CEO has been Walt Bettinger.

He says all participants in 401(k) plans “should be automatically enrolled in customized, objective, unbiased advice in how much they should save and how that money should be invested, given their personal and unique circumstances.” Secondly, Bettinger says, “We need to dramatically lower the level of fees associated with the management of 401(k) accounts.”

More On Investing And Retirement:

Bankrate spoke to Bettinger about his 401(k) ideas and whether individual investors can get a fair shake in the stock market.

You have a lot of ambitious ideas regarding 401(k) plans. Do you think there should be a government solution involved at all?

I do not think we need a government solution. I think we need courage across the industry –individuals like myself who have been in this business for three decades to stand up and speak with truth and objectivity about what we need to do differently. I think that is all it takes, but it has got to start.

You referenced social and financial challenges arising from underfunded retirements. Can you talk about those a little bit more? Are we experiencing those challenges already?

I think we are. And of course, there are many factors contributing to that — demographics, improving health care. Today one of the great challenges we face as a country is we expect in a 40-year working career — and I am using round numbers, of course — to fund a 30-year retirement. The math just does not work. So it is part of the overall challenges that we face.

What are challenges facing pension plans and their recipients?

The challenges facing pension plans are linked exactly to why we have seen, for the most part, the demise of the pension plan. And that is, a long-term promise made in an uncertain world. You know, think of the interest rate environment today where most pension plans had interest assumptions of 7 (percent) to 9 percent earnings and it is just not realistic to attain. And it is not realistic to fund those monthly benefits funds to people far out in the future without taking enormous risk as to whether the company will have to put a lot more money in the plan. And you have seen, to a great extent, the demise of the pension program.

Would you agree that saving for retirement is most difficult for young people? And do you treat that problem differently when you are advising individuals?

What our research has shown is that one of the major reasons young people hesitate to save is because they feel even less prepared than someone who may be older to make all these decisions that we are foisting upon them. When you offer professional counsel for them that is objective and they know that they can trust, they are more willing to sign up than if they have to try to do it all on their own.

For 50 percent of the people, they have no idea what to do. For one-third (of the people), this is causing major stress in their life. Is it any wonder that a younger person, with all the other pressures they are dealing with, and without the benefit of maybe managing money ever for themselves, that they would be hesitant to put money away to something where they are clueless as to what decisions they should make?

Can the average person get a fair shake in the market?

I think that if you are an investor, you can definitely get a fair shake. An investor is someone who has a plan, takes a long-term perspective and is not trying to guess. If you are someone who believes that you are going to beat the market by timing it, by guessing, by trading on a highly different basis, you must be exceptional. And there are some people who are exceptional at that, but that is a very, very tiny percent. The vast majority of people are far better served by not trying to time the market, not trying to beat those dark pools, not trying to beat the algorithm of high-frequency traders. Have a plan. Take a long-term view. Be in an ownership position. Owners generally are paid better than lenders and stocks generally outperform bonds over the long term. And stick to a plan.

I certainly personally would never try to time and beat the market and beat those folks. I would have no chance.

What is one decision either regarding your personal finances or an investment as an individual that you really regret making?

More On Investing And Retirement:

How much time do we have? I do not know that I can boil it down to one. I guess I would say looking back to the Internet bubble, I probably held onto a few stocks a little longer than probably made sense. But there are too many that I can speak to. If I had just had that professional advice and a plan, I would have been a whole lot better off.

We went through a flash crash in the stock market and there have been regulatory responses to that. Are these kinds of things keeping you up at night?

We live in an imperfect world. And we live in an imperfect world because it is a world operated by human beings. And as long as that is the case, we will have things periodically go wrong, whether it is technology related or whatever you want to fill in the blank on. With respect to hack attacks, certainly there is a burgeoning form of conflict among us as a country and a society and among those who have beliefs that are very different than ours. And the battlefield of the future may be very different than the battlefields of the past. Fortunately, we have extraordinary professionals across our government assisting here. But we should not kid ourselves. That is a battle that is going on every day and every minute and I can assure you, it is going on in the services of Charles Schwab at this very moment.

How much of a priority is it for you to ensure as perfect a system as you can, knowing that there are a lot of things you cannot know?

Well, a lot of the things I know I cannot talk about. It is a high priority, of course. But I just want to always provide the context — the honest and transparent context of the reality that we will live in an imperfect world and there will periodically be issues that will be, for the most part, impossible to prevent, despite all best efforts.

I think what our goal needs to be and what my goal needs to be, is to minimize the frequency and the severity of those as opposed to believe that I have some way to prevent them entirely. The bad guys are smart, too. And the idea that we are going to win at every turn is not realistic.