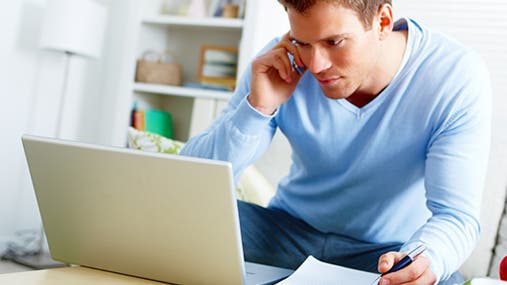 Under the Jumpstart Our Business Startups, or Jobs, Act signed by President Barack Obama last April, small investors will soon be able to make crowd-funded investments by buying shares in startups and small companies via fundraising portals on the Internet. Previously, these shares were only sold to accredited investors with a net worth of $1 million or annual income of $200,000, and a sophisticated knowledge of startup companies.

Now state regulators and investing observers worry that these high-risk investments may result in a trail of losses for smaller investors who aren’t used to navigating the less transparent, more complex startup market.

“More than half of all small businesses fail,” says Bob Webster, a spokesman for the North American Securities Administrators Association. “Going into a crowd-funded investment, assume that it, too, will fail.”

Below, we offer some tips to follow before getting into crowd-funded investing.

A crowd-funding gold rush is already happening, Webster says. Sites using the term “crowd fund” in their domain names have skyrocketed from less than 900 before the act was passed to 9,000 currently, Webster says. “A lot of these sites are merely shells waiting for final regulations,” he says.

And that’s before the Jobs Act has even taken effect. Though it went into effect last year, the Securities and Exchange Commission, which is charged with implementing the law, has delayed issuing final rules.

More than 20 separate Jobs regulations still need to be addressed, says Barbara Roper, director of investor protection for the Consumer Federation of America.

“They cover wide-ranging issues, such as regulating portals that sell crowd-funded shares,” she adds. Even so, Roper is concerned that crowd-funded investments may still be “a disaster, even if the SEC does everything right, since many startups fail.”

To be sure, NASAA has flagged crowd funding in an investor alert, as the potential for investor fraud also exists, Webster says. “Con artists gravitate toward the newest thing.”

Before the Jobs Act, small investors were barred from buying equity shares in startup companies that hadn’t yet gone public. Only popular crowd-funding sites such as Kickstarter.com allowed mass small donations to be made to startups but not actually receive an ownership stake.

The Jobs Act is aimed at broadening this small pool of investors and pumping money into new companies starved for capital. Touted as a way to democratize the startup process, the act allows companies to raise up to $1 million from small investors, with investors making less than $100,000 able to invest either $2,000 or 5 percent of their income, whichever is greater, and investors making more than $100,000 able to invest 10 percent of their income. Offerings will be made to investors via online funding portals and broker dealers.

Congress, which wants to keep stimulating the economy, wants to see the final regulations resulting from the act to be released soon, Webster says. “Meanwhile, the SEC is making sure that the regulations are done correctly and not rushed through.”

Still, Heath Abshure, an Arkansas securities commissioner and president of the NASAA, says crowd-funded investing is going to be difficult to police. “Only the SEC can review offering documents, which are the main disclosure document for investors, but there are zero additional SEC resources for policing,” he says.

Regulators also worry that many crowd-funded companies may be the weakest of startups, since they couldn’t get funding elsewhere. They may have shopped around for funding venues, such as venture capitalists, angel investors or banks, and were turned down, Webster says.

Brian Lebrecht, a securities attorney in South Jordan, Utah, says better companies will go with a venture capitalist, and the leftovers may be crowd-funded.

What is an expert’s advice for investors who want to reap riches by riding the next great startup? “Many investors should just say no to these investments,” the Consumer Federation’s Roper says. She compares investing in infant companies to gambling in a casino.

“The average investor isn’t doing enough safe and sound investing to even fund retirement,” she says.

To protect yourself, follow these tips when considering a crowd-funded investment.

Invest through a broker dealer. Crowd-funded startups are highly complex investments to understand, Abshure says. To make informed decisions, you’ll need to do a lot of research to learn about a company’s competitors, management, business strategy and capital plans.

Some of that information can be gleaned from the company’s offering document or prospectus. Annual reporting requirements depend on the size of the company, but it must at least file a report annually with the Securities and Exchange Commission.

“It takes very sophisticated training,” he says, so you may need investment guidance that a broker might offer.

Spread out investment risk. These are high-risk investments, so investors need to spread their risk across more than one company, Lebrecht says. And don’t invest money that you’re counting on for later. You could lose it all.

Remember that these are long-term investments. You may have to wait several years before a startup company goes public and you can sell your shares on a stock exchange. For example, Google was founded in 1998 and didn’t go public until 2004.

“Following the Jobs Act, crowd-funded startups may stay private even longer,” Webster says. “Most people will also (have to) hold onto their securities longer. How will investors cash out if they need to?”

Stick with local companies. Unlike with public stocks, stock market analysts usually don’t follow crowd-funded investments, so you’re on your own. Communicating with a company in which you own shares could be difficult, Lebrecht says. There may be 500 to 1,000 investors, and companies won’t have time to talk to each one.

“You’re at the mercy of the company for information,” he says. “Ultimately, companies that aren’t transparent are a bad risk.”

As a result, crowd-funding industry experts advise sticking with local companies of which you may already have some knowledge. “Consider investments where you can have private information, such as knowing the neighbor’s son,” says Freeman White, a member of the executive committee of the Crowdfund Intermediary Regulatory Advocates, or CFIRA, a crowd-funding advocacy group. “Large numbers of companies that are local success stories will need lending.”

But even White concedes that only a small percentage of crowd-funded companies will achieve high growth.

The Jobs Act isn’t written in stone. Lebrecht says confusion about the act and how it affects investors will continue for years. “More regulations will be coming down the pike,” he says.