Banks are in a fee-ing frenzy

The banking industry finds itself in the middle of a fee-for-all. In Bankrate’s 2012 Checking Survey, almost every checking fee we follow went up, with some bank fees rising 25 percent or more.

What’s behind the jump in all these fees? In part, it’s the banking industry’s response to recent regulations limiting consumer overdraft fees and to new rules capping the cost of debit card swipe fees for U.S. retailers, says Eben Jose, an industry research analyst with IBISWorld.

“That had a drastic kind of an effect on their revenue for retail banking,” Jose says. “They need to find a way to make up for these fees in other ways.”

In a recent Bankrate poll, 72 percent of Americans said they would consider switching banks if their financial institution raised its fees on checking accounts, up from 64 percent in March 2011.

“The consumer backlash was such that the banking community as a whole just decided to look to other avenues to recoup revenue,” McBride says.  “Banks have a lot of different levers they can pull to recoup revenue.”

Here are some of the other fee levers banks have been pulling lately.

Free checking shuffles toward the grave 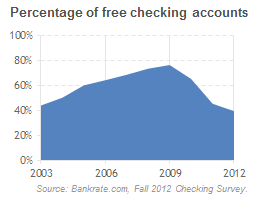 Free checking is growing increasingly rare at U.S. banks. In Bankrate’s survey, only 39 percent of banks offered a checking account with no minimum balance requirement and no monthly fee, the standard definition of a “free” checking account. That’s down from 45 percent in 2011 and down substantially from its peak of 76 percent in 2009.

“We continue to see a decline in the availability of free checking,” says McBride. “I don’t expect it to reverse anytime soon.”

Tip: If your bank eliminates free checking and you get stuck paying new fees, you might want to try shopping around for a better deal, McBride says. 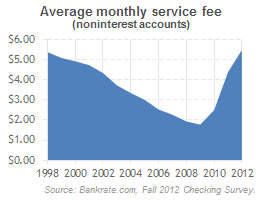 Even as more checking accounts have gone from “free” to “fee,” those bank fees have risen steeply. The average monthly maintenance fee for a noninterest-bearing checking account rose to a record high $5.48, an increase of 25 percent over last year.

Some banks will waive that fee if account holders average a certain minimum balance, but that hurdle has risen as well. Now, you’ll have to keep an average of $723.02 in your account to avoid a monthly fee, up 23 percent from last year.

That may seem punitively high, but some banks are pushing required minimums much higher, Jose says.

Tip: Fortunately for customers, 56 percent of banks offer fee waivers for doing things such as signing up for direct deposit, McBride says. When you combine that with the banks still offering free checking, there’s a path to avoiding monthly fees for 95 percent of checking accounts.

Using out-of-network ATMs will cost you 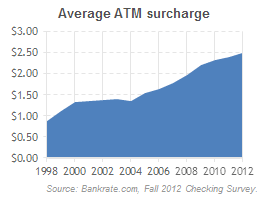 In total, you’re looking at a combined price tag average of $4.07 for every out-of-network ATM withdrawal you make, a stiff price to pay for a little extra convenience.

Banks also hit a dubious milestone this year. For the first time, all of the banks surveyed charged noncustomers for using their ATMs.

That fits in with the overall trend of banks looking for new revenue wherever they can find it, IBISWorld’s Jose says. “Every bank fee that they can charge, they are charging and raising,” he says.

Tip: Making regular stops to an in-network ATM to get cash or using a smartphone to search for nearby ATMs can help you easily skirt increasingly high ATM fees, McBride says.

“It’s completely avoidable,” he says. “If you’re really in a pinch, you can use your debit card at the point of sale and get cash back.”

Overdrafts have long been a hot-button issue for consumer advocates because they can pile up quickly once your checking account balance hits zero.

Unfortunately for those who do wind up getting smacked with an overdraft fee, it’s going to sting a little more this year. The average overdraft fee, known in the banking industry as a nonsufficient funds fee, or NSF fee, rose to a record high of $31.26, up from $30.83 last year. The year-over-year increase is about in line with inflation at 1.4 percent.

Tip: You can avoid NSF fees on debit purchases by not “opting in” to what banks term “courtesy overdraft protection.” Doing so will cause your debit card to be declined at the register rather than triggering an overdraft.

Still, there are other ways you can incur NSF bank fees including automatic bill payments, bounced checks and even ATM withdrawals.

Monitoring your bank balance closely is the key to avoiding overdrafts, McBride says. Fortunately, many banks offer tech tools to help you.

“Between 24/7 online and mobile access, coupled with email and text alerts, there really is no excuse for repeated overdrafts,” he says.

Yields on interest checking are falling 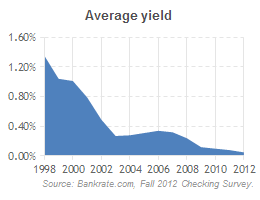 Terms on interest-bearing checking accounts are looking even less attractive than they were last year. The minimum balance to avoid a monthly maintenance fee has nearly doubled in the last two years, reaching $6,117.80. Making matters worse, if you don’t make that threshold, you’ll be on the hook for a $14.75 monthly maintenance fee.

You’ll also need to come up with a minimum of $507.60 on average to open the account. While that’s not the highest amount ever recorded in our survey, it’s higher than last year’s figure of $441.61.

But even as terms have become stricter, yields on interest checking have diminished. The average interest-bearing checking account is paying a minuscule 0.05 percent in interest. With an account at the $250,000 maximum insured by the Federal Deposit Insurance Corp., that amounts to $125 per year in interest.

Tip: Rising fees and declining rewards mean interest-bearing checking accounts have lost much of their appeal.

“Interest checking accounts are not an efficient use of cash,” McBride says. “The interest earnings you receive are a pittance, but it means stranding a large balance at the bank — even if it is in other accounts — at less-than-optimal yields just to avoid the monthly fee. And incurring the fee just once can erase years of interest earnings.”