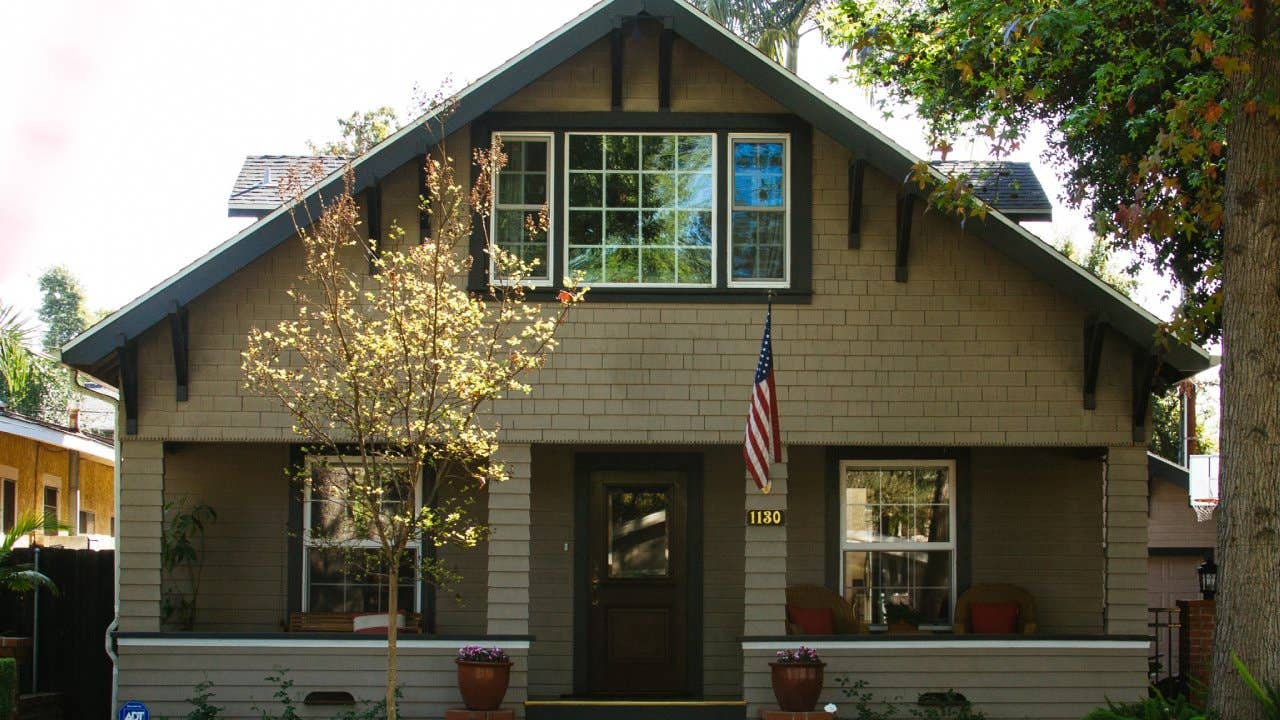 The name has an exotic, vaguely vacation-home sound. But the bungalow is actually an extremely common American style of residence. Dating from the turn of the 20th century, these small and relatively inexpensive residences offered working class people their first shot at property ownership — and they remain ideal for first-time homebuyers today, as well as those looking to downsize to a more modest dwelling.

Let’s explore bungalows in all their variety.


What is a bungalow house?

While Realtors may use the term “bungalow” to describe any small or single-level home, true bungalows are a specific style of house. Bungalow homes stand one- to one-and-a-half stories tall with inviting front porches shaded by roof overhangs held up by visible beams and rafters. Architect Peter LaBau, author of The New Bungalow Kitchen, says you can spot a bungalow by “its hipped roof, wide overhanging eaves and porch, and often simple square footprint.”

The interior of a bungalow home often features built-in cabinetry — to make maximum use of the compact living space — and is typically flanked by two or three bedrooms.

History of the bungalow home

Bungalows originated in South Asia (the name comes from the Bengal region). They were designed to shield homes from the hot sun, with the wide roof keeping both the house itself and a long front porch or verandah shaded.

The U.S. iteration of bungalows first developed in the 1870s, but really started to flourish in the early 1900s, from a couple of sources on opposite coasts. Inspired by the dwellings of India and Asia, Charles and Henry Greene, a fraternal pair of innovative architects in Pasadena, began designing what they deemed to be bungalow-style houses. Wildly popular in California, the so-called California bungalow or West-Coast bungalow soon spread across the rest of the country.

They were met halfway by houses whose blueprints and floor plans were published by New York-based interior designer Gustav Stickley in his magazine The Craftsman. A big advocate of the Arts and Crafts movement, with its simple, artisanal aesthetics, Stickley also dubbed his homes “bungalows,” proposing them as regular, full-time residences.

In fact, people today often use the terms “Craftsman home” and “bungalow” interchangeably. They’re not the same thing, though. Craftsman is an architectural style that can apply to any home interior or exterior, while a bungalow is a specific type of home construction. That means you can have a Craftsman-style bungalow, but you can also have a Craftsman-style house that isn’t a bungalow. And a bungalow, a somewhat more generic term, doesn’t have to be in the understated Craftsman style (in fact, some of the Greenes’ efforts were quite large and lavish).

However it’s referred to, the bungalow took off as an ideal if modest home: Since they were straightforward in design, and able to sit on small plots of land, they could be built fairly cheaply. They offered an unprecedented opportunity for homeownership for many working-class people, and a vacation or second home for the upper middle classes.

Their heyday continued up to the 1930s. After World War II, other styles suited to the mushrooming suburban subdivisions, like ranch houses and split-level houses, began to supplant bungalows.


What are the different types of bungalow homes?

There are many types of bungalows, as the definition isn’t cut and dried. Here’s a look at common styles, as detailed in the book American Bungalow Style:

What are the pros and cons of a bungalow?

Who are bungalow homes best for?

At between 1,000 and 2,000 square feet, bungalows are a great option for young families looking for a starter home, empty nesters hoping to downsize in a home without stairs, or single homeowners who want a detached house and home lifestyle without managing a huge property.

“For those that don’t want to deal with the issues that go along with all old houses but who want the ‘authentic’ look and flavor of the real thing, a new, traditionally styled bungalow is a great alternative,” LaBau says. “Any other small house is just that, a small house. “