Attending an out-of-state college appeals to many students. Not only is it a chance to explore what it’s like living in a new place, but it also opens up hundreds more options so you can choose a school that truly caters to your needs. However, there is a price to attending a school out of state; College Board estimates that the average tuition and fees for the 2021-22 school year is $16,820 higher at out-of-state schools than at in-state schools.

If attending an out-of-state school is the right choice for you but it isn’t in your budget, there are ways to reduce these costs. Here are five things you can do to reduce your out-of-state tuition costs:

How to reduce out-of-state tuition costs

It’s common for students to seek an education outside of their home state; in most states, the percentage of undergraduates who are nonresidents hovers around 30 percent, according to U.S. Department of Education data. If you fall into this category, here are some strategies to help lower the extra tuition you’ll have to pay.

Apply for a tuition reciprocity agreement

Tuition reciprocity agreements, also known as tuition exchange programs, are programs that allow students to attend an out-of-state college within their region without paying out-of-state tuition. Eligibility requirements vary from agreement to agreement. Some programs require certain majors or a certain GPA, and spots may be limited, so those wanting to apply need to do so early.

Here’s a rundown of the larger programs offered:

To find out if your region offers a tuition reciprocity agreement, use the National Association of Student Financial Aid Administrators (NASFAA) resource page or contact your state’s education agency.

Some higher education institutions have also established agreements with certain out-of-state counties that allow students enrolled in qualifying programs to get in-state tuition. For example, residents of some counties in Kentucky who are enrolled in specific programs are eligible to receive in-state tuition at the University of Cincinnati. Check with your school’s financial aid office to see what other tuition reciprocity agreements are available to you.

If you plan to move permanently to the state in which you attend college, you may be able to establish residency to get in-state tuition.

Residency requirements hinge on whether you’re a dependent or independent student. Dependent students generally must have at least one parent who has been a state resident for at least 12 months before the student enrolls in college in that state, though this time requirement varies by state.

Independent students typically must be a resident of the state or have a spouse who is a resident for at least a year before classes begin, though these timelines and additional age requirements vary by state.

In order to be granted residency status, you may have to prove:

You’ll also need to limit your connections to another state. Having a driver’s license, a mortgage, voter registration or even a library card in another state could make it difficult to change residency status.

Ask about institutional scholarships and and tuition waivers

For example, the University of Alabama awards automatic merit scholarships to out-of-state freshmen with high GPAs and standardized test scores. Out-of-state freshman with a GPA of at least 3.0 and a 27 ACT or 1260 SAT score can earn anywhere from $6,000 to $28,000 a year.

Tuition waivers are similar to scholarships — they lower your overall tuition charges — but they are typically granted only to students with financial need. For these, you’ll need to work directly with your financial aid office.

Outside of your school’s scholarship opportunities, you can find hundreds of niche scholarships that may align with your experience or interests. Private scholarships likely won’t provide as much funding as institutional scholarships, but stacking multiple scholarships together can bring down your cost significantly.

Using a scholarship search engine can help you find scholarships within your wheelhouse. These search engines allow you to filter results, bookmark opportunities and track application statuses.

Federal financial aid is distributed by the U.S. Department of Education based on information you put on your Free Application for Federal Student Aid (FAFSA). After you fill out the FAFSA and are accepted to colleges, your total aid package will be reflected in a financial aid award letter.

Students can receive grants, like the federal Pell Grant, or qualify for the federal work-study program as a way to reduce out-of-pocket costs.

Out-of-state schools can cost tens of thousands of dollars each year, and you may still be on the hook for some of those expenses even after using scholarships, reciprocity agreements and federal aid. If you can’t afford the rest of your tuition out of pocket, student loans can cover any remaining gaps.

Unlike the aid described above, student loans need to be repaid with interest. These loans can come from either the federal government or private lenders. While federal student loans have unique benefits that make them the best first step for borrowers, they do have yearly loan limits. These limits are often sufficient for in-state tuition costs, but they may not be enough if you’re attending an out-of-state college. In this case, you may have to supplement with private loans, which rarely have loan limits but may require a co-signer.

Before taking out a student loan, take a close look at what you’d need to borrow for an out-of-state school versus an in-state one. Loans are a convenient way to pay for college, but they can be expensive. It may not be worth it to borrow tens of thousands of dollars for an out-of-state school and have that debt follow you for a decade or more. Before deciding, use a student loan calculator to estimate your total charges. 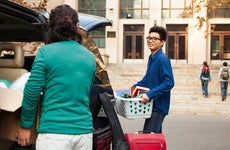 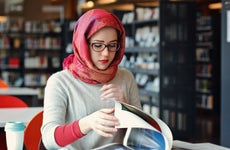 How to get a student loan 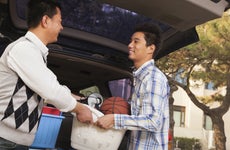 How to get in-state college tuition 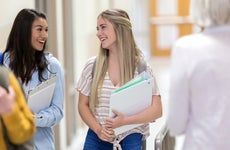 How to pay for college with scholarships