Those involved in the stock market have many ways to make money, but these strategies can be boiled down to two big ones: investing and trading. One could say the difference between each strategy comes down to two things: time horizon (how long you’re willing to hold a position) and mindset (whether you think like an owner or like a flipper out for a short-term profit).

In contrast to what you see in Hollywood films and television, research suggests that the vast majority of market participants – virtually all – would do better if they adopted an investor mindset rather than a trader mindset. And that’s due to the many subtle costs and inefficiencies of trading.

Here’s the difference between investing and trading, and which one is likely to work better for you.

Investing vs. trading: What’s the difference?

If you’re investing, you’re taking a longer-term mindset about your investments and you’ll do things such as the following:

Being an investor is about your mindset and process – long-term and business-focused – rather than about how much money you have or what a stock did today. You find a good investment and then you let the company’s success drive your returns over time.

If you’re trading, you’re focused much more on the short term, and you’re less interested in the business as a business. You’ll likely do some or all of the following things, such as:

Traders tend to have a short-term orientation. Being a trader relies less on analyzing a business than it does on looking at its stock as a way to turn a buck — and ideally the quicker, the better. Success here relies on outguessing the next trader, not necessarily on finding a great business.

Investing works better than trading for most

Passive investing is a buy-and-hold strategy that relies on the fundamental performance of the underlying businesses to drive returns higher. So when you take a stake, you expect to hold it for a while, not simply sell it when the price jumps or before the next person offloads their stake.

Passive investing via funds (either ETFs or mutual funds) lets you enjoy the return of the target index. For example, the Standard & Poor’s 500 index has returned an average 10 percent annually over time. That would be your return if you had bought an S&P 500 index fund and not sold.

Active investing is a strategy that tries to beat the market by trading in and out of the market at advantageous times. Traders try to pick the best opportunities and avoid falling stocks.

While active investing seems like it would be the consistent winner, research shows that passive investing tends to win the majority of the time. A 2018 study from S&P 500 Dow Jones Indices shows that 63 percent of fund managers investing in large firms didn’t beat their benchmark index in the previous 12 months. And over time only a handful could do so, with 92 percent of the professionals unable to beat the market over a 15-year period.

These are pros who have experience, knowledge and computing power to help them excel in a market dominated by turbocharged trading algorithms that have well-tested methodologies. That leaves very few crumbs for individual traders without all those advantages.

3 hidden costs of trading to watch for

Trading has a number of hidden costs, things that ultimately make it less profitable for most traders than sticking to an investing approach. Here are three of the most common:

1. Trading is a zero sum game

Trading operates on what’s called a zero sum game. That is, if someone wins, it comes at the loss of someone else. For example, options trading is essentially a series of side bets between traders on the performance of a stock. If a contract is in the money by $1,000, the winning trader gets exactly that money, effectively taking it from the losing trader.

So trading is just shuffling money around from player to player, with the sharpest players rolling up more money over time from less-adept players. In contrast, investors are playing a positive sum game, where more than one person can win. Investors make money when the business succeeds over time.

2. It’s easy to miss the big days as a trader

Traders may think that they’re being crafty by ducking and dodging, but they often miss the market’s biggest days because they’re out of the market or only partially invested.

A report from Bank of America reveals how being out of the market can be so damaging. The data shows that the S&P 500’s total return from 1930 through 2020 was 17,715 percent. But what’s the total return if you had missed just the market’s 10 best days each decade? The result: a mere 28 percent total over the entire period, from missing fewer than 100 total days.

Market pundits have a saying: “Time in the market is more important than timing the market.” That is, it’s more important to stay invested than it is to try to dodge losses and pick off gains. And that’s where the long-term mentality of an investor helps you focus on the future. You ride out the bad days, because the market as a whole has been on a long-term upward trajectory.

You create a tax liability every time you realize profits on an asset sale. So traders who bounce in and out of the market are realizing profits (or losses) all the time. That reduces their ability to compound gains, because they have to cut the IRS in for a slice of every gain they realize.

In contrast, investors tend to let investments run. And because the government doesn’t require you to pay tax until you sell an investment, investors are able to compound at a higher rate, all else equal. In other words, they effectively force the government to give them an interest-free loan by deferring their taxes, and they continue to compound on the full, pre-tax amount.

For instance, imagine you started with $10,000 and gained 20 percent annually for five years but sold each year and incurred taxes of 20 percent each year. At the end of the five-year period, you’d have assets of $21,000 – good for about 16 percent annualized gains. Not bad!

But you’ll have even more if you hadn’t sold. Without selling, you’d have turned that $10,000 into more than $24,883, and kept the entire 20 percent annualized gains. And if you decided to sell then? You’d still have $21,906 after taxes, or nearly 17 percent annually over the period.

That’s a hidden advantage that investors have over traders.

The evidence is clear that investing is a strategy that works better for most people. Can some traders consistently beat the market? Absolutely, no question. But for most people it’s better to be an investor than a trader – and it can take less time and effort, too.

Legendary investor Warren Buffett recommends that investors regularly buy into an index fund such as an S&P 500 fund and then hold for decades. This approach follows the spirit of being an investor – taking a long-term mindset and letting the businesses generate gains for you. 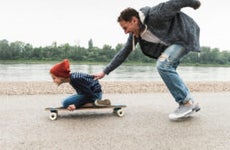 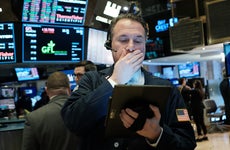 Buying the dip: Is this a good strategy when markets are falling? 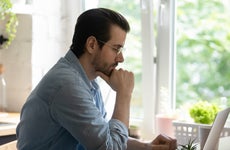 Options vs. stocks: Which one is better for you? 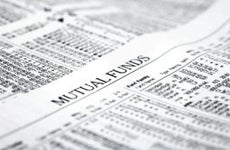