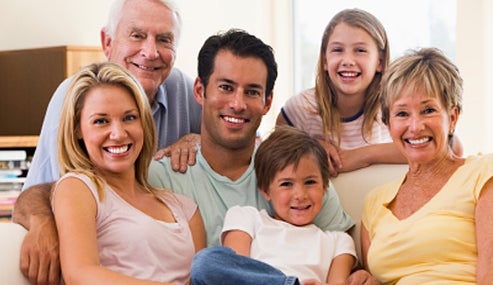 Home insurance and auto insurance were much more straightforward for yesterday’s “typical American household” that included a mom, a dad and their kids. Today’s multigenerational households and other nontraditional living arrangements are more complicated, and the insurance issues can be, too.

Many adult Americans are moving back in with Mom and Dad, doubling up with other families or making room for elderly parents in the wake of scarce jobs, tightening finances and rising housing costs. In one extreme example, Superstorm Sandy’s flood damage in Breezy Point, N.Y., forced an extended family of 31 to squeeze in together under one roof.

What the U.S. Census Bureau calls “shared households” are becoming so commonplace that contractors are offering homes built specifically to accommodate multigenerational living. In these situations, you want everything to be harmonious — and insured.

In most states, when family members move in with relatives who have home insurance, their belongings will be considered insured under the homeowner’s policy, says Kevin Lynch, assistant professor of insurance at The American College in Bryn Mawr, Pa.

However, if the individuals who move in are not related to the homeowner, in all likelihood their belongings will not be covered by the policy, Lynch says. This applies regardless of the reason for, or length of, the stay.

If you’re the homeowner in these situations, the laws in your state may not require you to tell your insurance company when there are multiple households sharing your dwelling, says Pavel Levitanus, an agent for Farmers Insurance in Laguna Hills, Calif. However, he says it’s important for homeowners to keep their insurance up-to-date and report any changes in circumstances.

“Never assume you know what’s covered and what’s not,” he advises.

Renters insurance has its own rules

With an apartment or house that’s being rented and has renters insurance, the coverage rules are somewhat different. In those cases, the policy won’t cover the property of a person who moves in with the renter, regardless of whether the two are related, Lynch says. So if, for example, you go to live with your brother in his apartment, you’ll need your own renters policy to cover your computer and other things.

Eustace Greaves Jr., owner of Greaves Financial Services and The Bridge Insurance Agency in New York City’s Brooklyn, says Superstorm Sandy has had an important effect on insurance requirements for people in rentals, at least regionally.

Greaves says he recently checked with three different insurance carriers concerning families or individuals moving in together. “Each one now wants the new residents to own their own renters insurance for their personal property,” he says.

One of the key components of a home insurance policy is liability coverage to protect against lawsuits and claims over injuries and property damage.

In a multigenerational household, or when multiple families are living under one roof, the standard liability coverage from the home’s insurance policy may not go far enough, Lynch says. He advises opting for additional coverage through a relatively inexpensive umbrella policy.

“What an umbrella liability policy does is overreach other underlying policies,” he says. For example, a homeowner with a $300,000 policy limit who purchases a $1 million umbrella policy would increase his or her liability coverage to $1.3 million.

Umbrella can keep you covered

Personal liability insurance, which is simply another term for an umbrella policy, can both fill coverage gaps and help indemnify against additional liability and damages. Greaves says it’s a smart thing to have in a multifamily living situation, even if you’re not the homeowner.

For example, let’s say family A is hosting family B. When a child from family B visits a third family — family C — and spills ink that ruins their carpet, whose insurance would come into play? Family C’s policy would cover the damage, but if family C decided to sue, they’d take family B to court, not family A, Greaves says.

Insurance to inoculate against dog bites

Dog bites, a frequent source of liability and litigation, present a different type of problem for homeowners. If a dog belonging to family B, which again is staying with family A, bites a third party, then family B’s liability insurance is primary. But that doesn’t mean family A is off the hook in this case because family A’s insurance would be secondary, says Greaves. That means that family A also could end up in court.

“Either case presents an excellent case for the purchase of personal liability insurance,” whether you’re the homeowner or are being hosted by the homeowner, he says.

“Cover your back, and call your agent,” Greaves says. “Get some guidance on this issue from the beginning, and don’t wait until they’ve been living in your house for three years to discover the insurance implications.”

Auto premiums can be affected either way

Some car owners who house other drivers with checkered driving histories may run the risk of higher premiums, warns Levitanus.

“If you have a family member moving in and they have a terrible driving record, you’ll probably want to exclude them from your policy,” he says. This means that the individual cannot, under any circumstances, drive the cars on your policy.

On the other hand, a roommate with a good driving history could be advantageous, Levitanus says. Adding him or her to the household’s automobile policy could result in multiple car discounts or other benefits.

Whether you’re talking auto insurance or home insurance, the experts agree that touching bases with the insurance company is a smart move before you find yourself in an expanded or multigenerational household. “You shouldn’t make a move without talking to your insurance broker or agent when it comes to things like this,” Greaves says.