The home equity picture in the United States looks pretty similar to what it did pre-recession. Collectively, homeowners have $15 trillion tucked away in their properties — about a trillion and a half dollars north of the high mark before the recession, based on federal data.

But this time around, people seem unwilling — or unable — to use their homes to come up with some extra cash.

The percentage of people using their homes to secure loans remains exceptionally low. Some experts view the change in borrowing behavior as a sign that consumers are more financially savvy about avoiding the pitfalls of using home equity witnessed during the last housing boom.

Homeowners held 4.2 million home equity loans and 10.3 million
home equity lines of credit (HELOCs) collectively as of March, the lowest numbers in each category since at least the first quarter of 2008, according to Equifax.

Cautiousness around using home equity — the difference between how much the house is worth and any debts against the home — is a smart move by consumers, says Greg McBride, CFA, chief financial analyst for Bankrate.com.

“The people that got into trouble by tapping home equity during the late stages of the last economic expansion were the people that weren’t timid at all,” McBride says. “Those that were timid and hesitant were better protected when home prices fell.”

Homes are not ATMs

From 2003 to 2007, homeowners were extracting more than $350 billion per year to free up cash for a variety of purposes, from renovating the kitchen to purchasing a new car, according to the Federal Reserve Bank of New York’s Liberty Street Economists blog.

“There were a lot of people drinking the Kool-Aid of ‘home prices will never decline,’” McBride says. “One of the consequences of that was people took out equity that evaporated a couple years later. Then they were on the hook for a loan, and that’s why the percentage of underwater homeowners skyrocketed.”

Home prices hit a high in February 2007 and then steadily fell until February 2012, a 35 percent drop, based on the S&P/Case-Shiller U.S. National Home Price Index. 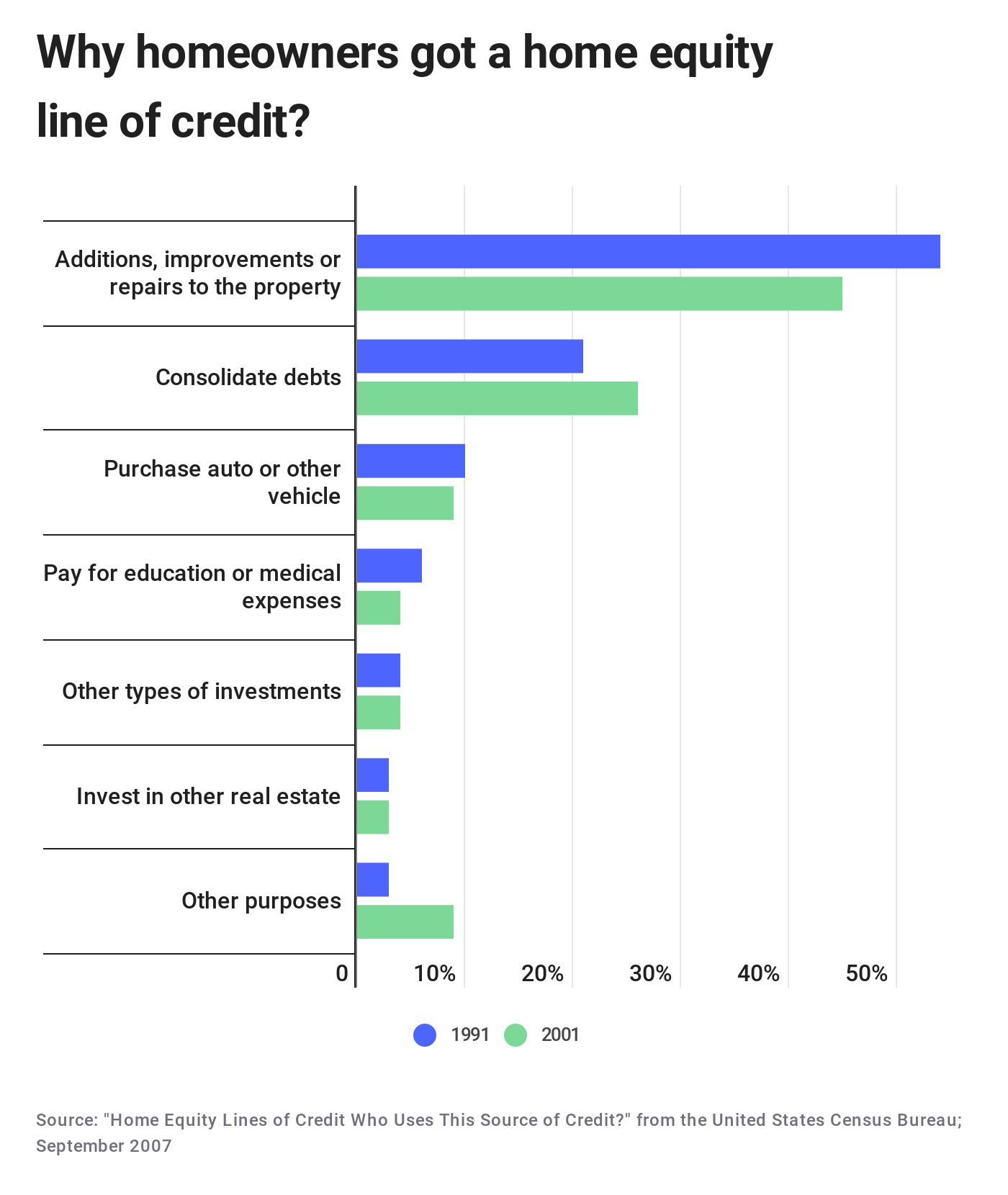 Drilling down on exactly what people used equity for is tricky. In 2007, the U.S. Census Bureau released a brief showing the main reason people took out HELOCs in 2001 and 1991 was for home improvements. The second most popular reason, according to the brief based on the Residential Finance Survey, was debt consolidation.

About 10 percent of HELOC borrowers indicated they used the equity they extracted from their homes to make a vehicle purchase, according to the census brief. Research from economists at the Federal Reserve Bank and a graduate student at the University of California-Los Angeles shows that home equity extraction funds about 1 to 2 percent of both new and used car purchases and was largely unchanged during and after the housing boom. Later research from the team shows some borrowers may have been using home equity to help make down payments and then turning to a traditional auto loan to cover the rest of the auto purchase.

HELOC balances have been steadily declining since 2010. Decreasing originations coupled with the decline in open accounts reaching their end of draw led to a 5.9 percent drop in balances in the second quarter of 2018 compared with the year prior, according to data from the latest TransUnion Industry Insights Report. 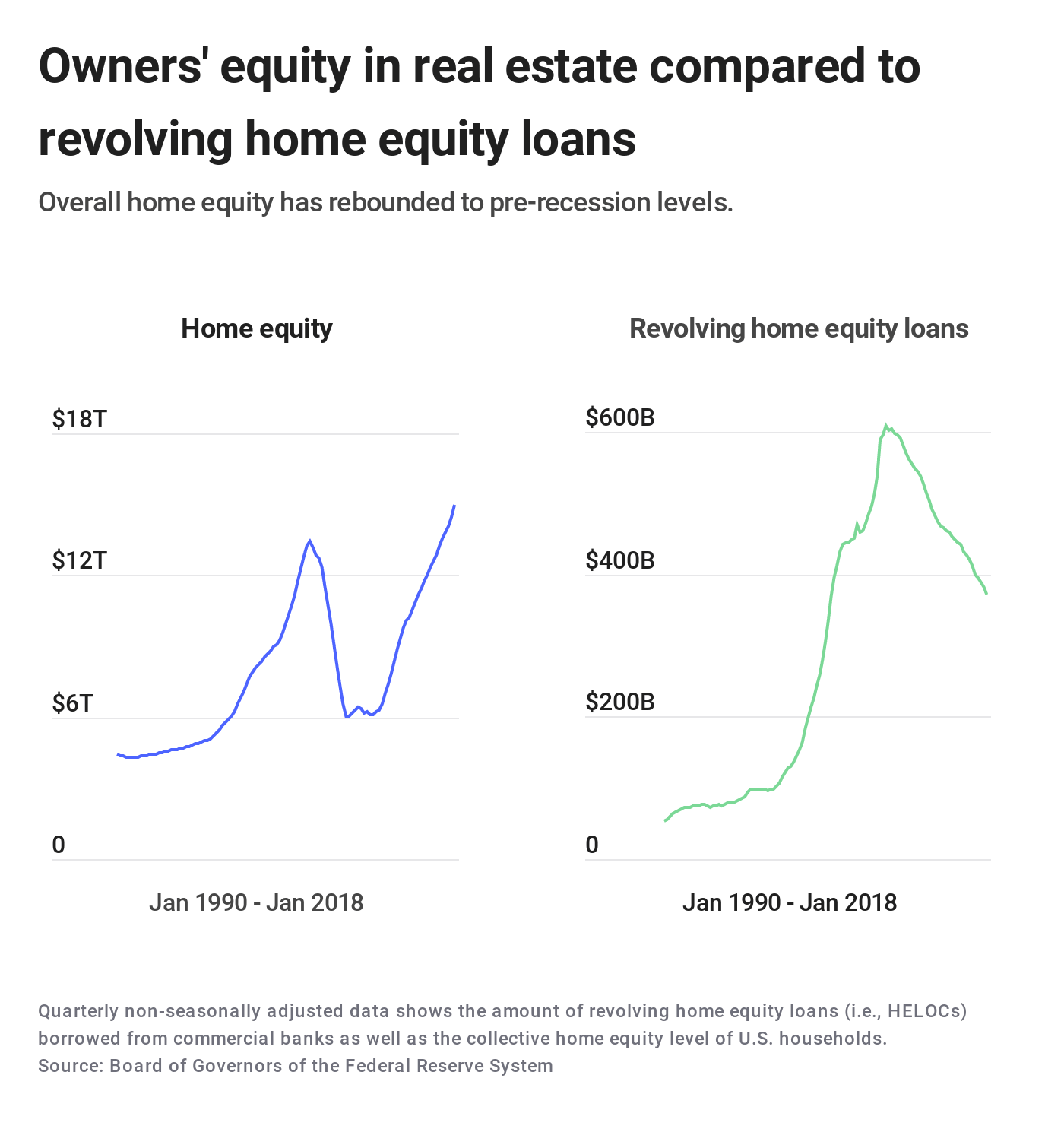 Economists at the Federal Reserve suggest the decline in home equity is contributing to people spending less overall.

The
HELOC market presents a lot of potential for lenders, says Kristen Bataillon, senior manager of financial services research and consulting at TransUnion.

“Given that the percentage of borrowers with delinquencies is back at 2007 levels, market shrinkage is likely due to the lack of product promotion as opposed to lender caution. And given that homeowners equity prices are up, this really is an opportunity,” Bataillon said during a webinar Thursday.

Smart ways to use home equity

McBride warns homeowners not to believe every dollar they use in home equity to add a new deck or make other home improvements will be added to the value of the home — a $20,000 new kitchen in a $300,000 home doesn’t necessarily make the property worth $320,000. And in the case of repairs like fixing a hail-damaged roof or dealing with termites, the money from home equity might go toward preserving the current value of the house.

Using home equity to get debt under control could be advantageous because it’s possible to reduce interest costs and speed up debt repayment, McBride says.

“But it’s going to require a lot of discipline, and you’re also going to have to have identified and solved the problem that produced that debt in the first place,” he says. “If that debt came about from overspending, until you fix that problem, don’t tap the home equity because what’s going to happen is you’re still going to have home equity debt you’re paying on but you also would have gone out and run up the credit cards all over again.”