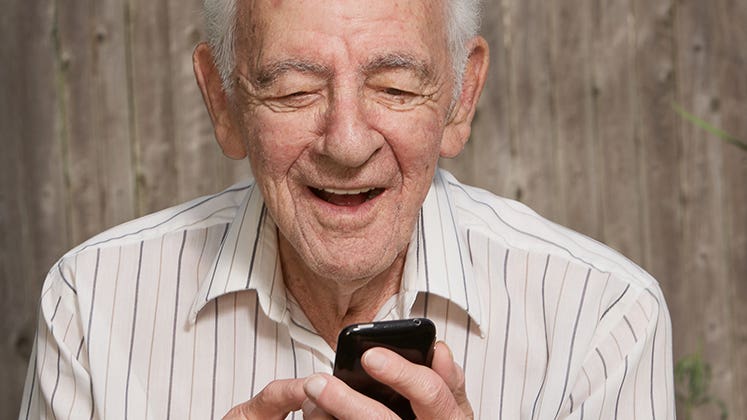 Cellphones are now nearly as common among seniors as among everyone else. Up until recently, seniors had lagged when it came to smartphones, whether it’s because they’re too complex, expensive or simply aren’t tailored to their needs.

But now they may be starting to catch up. Past surveys conducted by the AARP showed that older adults primarily wanted cellphones for security, while young adults wanted them for convenience, says Christopher Baker, senior strategic policy adviser for AARP.

“That’s changed. The capability to see video on your phone and keep in touch with family members can really get people excited about smartphones,” Baker says.

But how do you find the right phone with the right plan, especially for seniors on fixed incomes? Here’s our guide.

Questions to ask when choosing a senior’s smartphone:

1. What does the user really need the phone to do?

One option for seniors is a “semi-smartphone,” says Michael Schulman, member of the American Institute of CPAs’ Elder Planning Task Force.

These devices don’t have all the features of top-of-the-line smartphones, but they still allow users to do basic smartphone functions like check their email, take photos and also text or email those photos.

Some examples of phones to consider in this category include the Kyocera Jitterbug Touch 2 or Samsung Galaxy Stratosphere II.

On the other hand, if a senior wants to get on the Internet often, stream lots of video and talk and text, they will probably be in the market for the exact same kind of smartphone their younger counterparts crave.

2. Does the user need any additional accommodations?

Hearing: Hearing-impaired seniors may want to add on captioning or relay services, which are free as guaranteed by the Federal Communications Commission’s Universal Services Program. With these services, the user can see a transcript of the conversation as it’s happening. While the services themselves are free, the data needed to run them is not, so users who will rely on them may need a more robust data plan, especially if opting for a video relay service, says Matt Gerst, director of external and state affairs for CTIA, a wireless communications trade group.

Gerst says that all wireless handsets are given a rating for their compatibility with hearing aids. You can find a device’s hearing aid compatibility rating through either the FCC or on a service provider’s website.

Dexterity: Those with dexterity issues due to arthritis or other issues can add a stylus that makes hitting the buttons on the glass of the smartphone easier, or opt for a smartphone with a slide-out keyboard like the Samsung Stratosphere II or the LG Enact. Also, most BlackBerry phones come with a keyboard on the face of the phone.

Seniors with dexterity issues may also want to add insurance to cover repairs.

“Just like you drop your phone, seniors are prone to do so as well,” says Julie Fry, co-founder of Making Care Easier. “From our experience, seniors tend to think of cellphones much like hearing devices: ‘If it breaks, I didn’t really need it.'”

Memory: Fry says that seniors with memory issues may also want to add a phone locator — either an app or something that can be placed onto the phone — to help them locate their phone if it goes missing.

The number of options can be overwhelming, which is why CTIA has set up the Global Accessibility Reporting Initiative, or GARI, which is a buying guide for phones and tablets. It lets you narrow down what you need in a phone, including things like anti-slip features, phone shape and easy-to-press keys.

If the user is going to use a lot of data and texting, then a more expensive, all-inclusive voice/data/text contract plan can be worth the cost, especially if that phone is the only way the user will go online and stream video.

But for seniors on a fixed income, shelling out over $100 a month is not a viable option. That’s where prepaid and no-contract phones come in. Major carriers like AT&T, Verizon, Virgin Mobile and T-Mobile offer prepaid and no-contract phones. Another option is Boost Mobile. You can also go to retailers like Best Buy and Wal-Mart to shop for prepaid phones instead of searching through each carrier’s website.

If you’re not sure how much data a user will need built into their plans, AT&T and Verizon offer free data usage calculators.

When a smartphone isn’t the right choice

Smartphones aren’t the solution for every senior, says Laurie Orlov, industry analyst at Aging in Place Technology Watch, for three reasons: usability, cost and availability in training on how to use the technology.

“The reason they aren’t interested in them right now is the compelling value proposition has yet to be indicated,” Orlov says. “If you can text on a regular phone (and) you can get calls, really the question is what do you want that you’re not already getting?”

If texting and talking are all that a senior user wants, then a flip phone is still the best bet. Companies like Samsung and LG make flip phones specifically for seniors. They feature things like larger buttons and enhanced sound quality to make dialing and calling easier.

For seniors who want help in learning how to use a smartphone or tablet, AARP has a Technology Education Center, which has online guides on how to get the most out of those devices. AARP also teaches in-person workshops; schedules can be found at AARP’s website or by calling your local AARP office.