Extra fees make it nearly impossible to find the true lowest price for a flight.

So how do you know you’re getting the best deal when there are fees for baggage, roomier seating or early boarding privileges that help ensure your carry-on makes the overhead bin?

It’s all about sifting through the fees that each airline has to offer.

The first tip from airfare experts: Consider the ticket price as simply your cost for transport. Anything else you want, including everything from checked bags to water, could have an extra charge. You have to do more research if you want to compare fees that you’ll face for “amenities” such as aisle or exit-row seats. 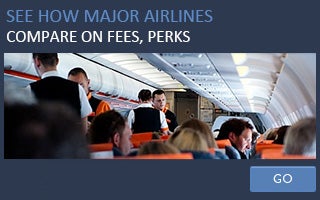 The overall cost can increase quickly with charges for Wi-Fi access, headphones and a few inches of legroom.

The airline industry is “profiting from our confusion” and hides the true cost of flying, says Christopher Elliott, a consumer advocate who says he gets “nonstop” complaints about unclear airline fees through his website Elliott.org.

Airlines have taken away conveniences and are selling them back to customers without lowering fares, he says.

“This is seriously not an honest business model,” he says.

Credit cards offered by airlines are one of the main ways to save on fees, particularly checked bag charges, says Ryan Lile, an avid traveler who started FrequentFlyerAcademy.com to teach individuals and businesses how to get the most rewards miles and to fly with perks.

Major carriers such as Delta, United and American Airlines offer the first checked bag for free with their branded credit cards. JetBlue, while it used to be one of two airlines that offered free checked bags, changed its policy in November. Starting in the first half of 2015, it will begin offering fare classes, where those flying with no bags will have a lower fare than those with checked baggage. The only airline still offering up to two free checked bags per person is Southwest.

Free checked bags with a credit card, a benefit often offered to family members, as well, can help make up for annual fees.

Joining airlines’ frequent flier clubs, which earn customers miles for free flights, is another way to get breaks on fees. For example, Delta offers its loyalty club members better seats and priority boarding for free at the lowest mileage level.

Some airlines throw in other credit card or frequent flier perks, such as discounts on food, use of a movie-watching device or passes to travelers’ lounges.

Peggy Goldman, president of Friendly Planet Travel near Philadelphia, suggests that people join an airline’s frequent flier club the first time they fly with a new carrier. Credit cards are a good deal for airlines you fly frequently because you live in a hub city or often visit a location served by a particular airline, she says.

While checking one or two bags can be pricey, you could pay hundreds for more bags or ones that are heavy or oversized, even if they exceed limits by only a few inches or pounds.

Beating those fees requires reviewing your airline’s rules so you’re not stuck shelling out extra money at check-in.

Active-duty military members can escape baggage fees on personal travel if they make sure to choose an airline offering that benefit.

Bring your own to save

Customers have caught on that another way to avoid fees is to bring supplies no longer standard on flights.

If you want something to drink on Spirit or Frontier, it’ll cost you. They don’t offer free drink service.

It’s a good idea on most airlines to make sure to pack food. Otherwise, plan to pay at least $3 for snacks such as chips and M&M’s. A sandwich, which might come with chips, runs about $10 on airlines that sell meals. Alaska Air offers a cheeseburger for a deal at $7.

Bring headphones because some airlines charge a couple of dollars or don’t offer them.

Your own tablet, phone or laptop loaded with entertainment will save you money over purchasing movies. Some airlines offer streaming movies for your personal device. Southwest, for example, charges $5.

Goldman says even her customers who are die-hard bargain hunters are not taking the rock-bottom fares anymore if they have to fly a stripped-down airline such as Spirit.

They don’t want to suffer in a seat that’s “too small for the average adult,” and they want to know that they won’t face a charge for every last thing they didn’t think of, she says.

Spirit charges for just about everything, including $10 for an airport agent to print a boarding pass and $26 to $100 for a carry-on, depending on when you pay.

The future of fees

Airlines have started bundling fees into packages, such as the Economy Comfort option on Delta that starts at a $9 per flight and includes earlier boarding, up to 4 inches of extra legroom and a seat toward the front. On some cross-country flights, fliers can add 50 percent more recline, free alcoholic drinks and snacks, a pillow, eye mask and earplugs to the bundle starting at $99.

FrequentFlyerAcademy.com’s Lile says these groupings make price shopping even more difficult because people must weigh whether to pay for individual perks or a group of them.

Airfare shopping sites are of limited help because the technology cannot break down all the extra costs to give a complete price comparison.

“There is really no true apples-to-apples comparison out there,” Lile says.

For the foreseeable future, the masses of passengers who want the lowest fare without extras will have to get used to fewer comforts from the airlines, a battle for carry-on space and less comfortable seats, often toward the back.

The airfare experts say the a la carte model is here to stay, and Lile says he expects airlines to continue to tweak and repackage fees to squeeze out the most profit.

Goldman says she is shocked that travelers who want the lowest fare are not clamoring more on social media for fare reductions in line with the recent drop in the price of fuel.

“Until the traveling public starts screaming and shouting and demanding better service from the airlines, this is not going to get any better,” she says.