What will the best-dressed ghouls and goblins be wearing this Halloween? Think big hair, spray tans and sequins.

Spirit Halloween, a seasonal Halloween retailer with 850 stores across the country, predicts that Lady Gaga and the cast of “Jersey Shore” will be partying with you this year.

The National Retail Federation’s 2010 Top Costumes Survey found that 120 million adults, kids and pets will be in costume this year.

And even though the economy is still sputtering along, people aren’t afraid to spend money on Halloween.

“Our feeling on Halloween, and it’s pretty concurrent with the NRF, is that people will be spending money,” says Dwivedi. “This is one of those occasions people still celebrate, even in a bad year.”

The NRF actually found that people are spending a little more than they did last year. According to the 2010 Halloween Consumer Intentions and Actions Survey, they’ll be spending an average of $66.28 on costumes, candy and decorations, versus $56.31 last year.

But budgets aren’t being thrown out the window. Carrie Sheerin, vice president for HalloweenMart.com, says that for the past couple of years, fewer people have been buying costume accessories.

And fewer people are planning ahead for Halloween. “It’s more of a last-minute holiday,” says Sheerin.

But it isn’t too late to get a spooktacular costume for this year. Click ahead to find out the most popular costumes for men, women, kids and pets this year. 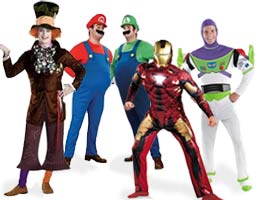 A lot of men are going to the old standbys this Halloween, according to the NRF survey. Some of the most popular costumes include vampires, pirates, zombies, professional athletes, doctors, police officers and clowns.

Pop culture is also having a big influence on men’s costumes. Some superhero costumes are very popular, such as Batman and Superman. Men are also dressing up as characters from ” Alice in Wonderland” and the “Star Wars” movies.

Dwivedi thinks that some of the big hits this year for men will be The Situation or Pauly D from “Jersey Shore,” so get ready for gym, tan, laundry. A lot of men will also be dressing up as Mario or Luigi from the Mario Brothers video games. “Iron Man 2” costumes are also popular.

Naika Cadet, sales associate at Abracadabra in New York, is seeing a lot of men buy superhero costumes and scary costumes like Freddy Kreuger or Jason from the “Friday the 13th” movies. 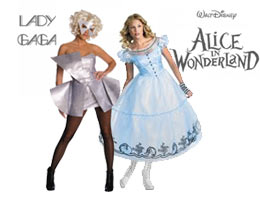 A continuing trend with women seems to be sexy costumes. “We have a lot of sexy costumes for the ladies,” says Elowitz.

The NRF survey says that a lot of women plan to dress as vixens, wenches, nurses and French maids, among other things. “Alice in Wonderland” characters are also popular for women. HalloweenMart.com sells Alice, Queen of Hearts, Cheshire Cat and Mad Hatter costumes.

The popularity of pirates with men, women and kids shows that it’s not just about those “Pirates of the Caribbean” movies. “They’re not just a theme around a movie. They’re a staple in the Halloween world,” says Sheerin.

“You’d think it would die down,” says Cadet. “But pirates are still huge.”

Flappers (women from the 1920s) also are popular at Spirit Halloween and Abracadabra.

And if you’re going for an MTV-inspired look, the “Jersey Shore” costume for women is Snooki, and for Lady Gaga expect blond wigs, big glasses and sequins.

Kids: To infinity and beyond! 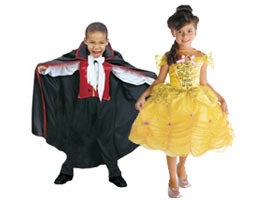 Princesses are very popular with girls. In fact, princess was the most popular costume for kids in the NRF survey. Tinker Bell and other fairies will also be trick-or-treating this year.

As for the boys, superheroes reign supreme: Spider-Man, Superman, Batman and Iron Man are tops.

And don’t worry if you see kids dressed up as Buzz Lightyear, you haven’t been magically transported back to the late ’90s. “Toy Story 3” has made the character a popular costume again.

Vampire costumes are popular with teenagers because of the “Twilight” movies and all the other TV shows with vampires that are on now, says Sheerin.

Other favorites in the NRF survey include: witches, pumpkins, ninjas, bees, angels and athletes. 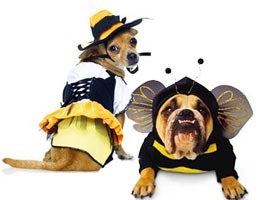 People often like dressing up their pets if they’re going to a party or a parade, says Cadet.

Dressing up dogs as skeletons, schoolgirls, “Alice in Wonderland” characters or Goldilocks is popular, says Sheerin.

“There’s a Paris Hilton influence there,” she says.

Batman and Robin are popular costumes for dogs at Abracadabra, says Cadet.

Some of the top pet costumes in the NRF survey include: pumpkin, witch, devil, hot dog, bee and pirate. 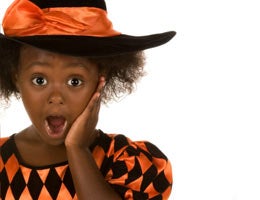 Looking for more frugal Halloween tips? Check out these resources from Bankrate.com: