In his new film, “Cedar Rapids,” Ed Helms plays an insurance salesman who leaves the safe confines of small town life for the excitement of the “big city” — Cedar Rapids, Iowa. In real life, though, Helms has moved from one big city to another, enhancing his career with every step. An Atlanta native, Helms moved to New York after graduating from Oberlin College to immerse himself in the city’s robust stand-up and improv comedy scenes. A successful open audition in 2002 led to a correspondent gig on “The Daily Show with Jon Stewart,” and after several years, NBC’s “The Office” brought him out to Los Angeles. While he still brings the laughs on that show, Helms became a bona fide star when 2009’s “The Hangover” shocked Hollywood, eventually bringing in more than $277 million at the box office.

What did you do for a living during your early years in New York?

I was working in film post-production, exploring that. I was an assistant editor for a few years, trying to learn as much as I could.

Did you work on anything people would know?

I worked on TV commercials almost exclusively (at that job). But when I first moved to New York, I did tech support for AVID Editing Systems. I got trained to do tech support for that, and we worked on some big movies at the time. I think we worked on “Ransom” and “Meet Joe Black.” That was really exciting for me, although I was literally just the nerdy technician with the ponytail and a screwdriver putting servers together. 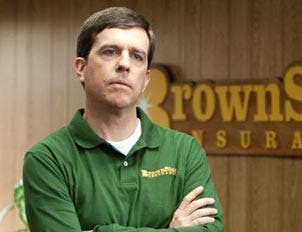 When you began to taste some success, what was the first really big, extravagant purchase you made?

I’m a fairly low-key guy. I don’t think I have anything terribly extravagant. I would have to say my 1945 Gibson guitar. And, I actually bought a very special banjo right after “The Hangover” came out. That was sort of my gift to myself. I’m not sure they would count as terribly extravagant, but they mean a lot to me.

How’s the sound on the Gibson?

It’s the greatest guitar I’ve ever played. I feel lucky just to have it at my disposal.

As well as you’re doing these days, what do you find you’re still frugal with?

I’ve always been a fairly thrifty guy. I didn’t fall into a lot of money all of a sudden. I’ve had a slowly building career, so my spending habits really haven’t changed that much.

Is there anything at all you splurge on now?

Ice cream. I spent hundreds of thousands of dollars on ice cream. No … but ice cream is an indulgence, for sure.