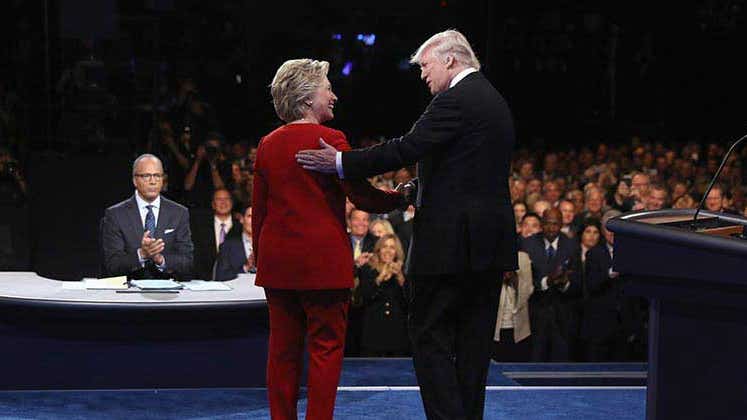 While the suspense builds toward Election Day, smart investors are thinking beyond Nov. 8 — and wondering if the outcome could send markets into a long swoon. Wall Street analysts surveyed by Bankrate don’t seem to think so.

Experts participating in our 4th-quarter Market Mavens survey expect the stock market will be little changed one year from now, and that interest rates will be slightly higher. They don’t anticipate a bear market.

One of the reasons stocks won’t fall out of bed is that central banks will provide support, the analysts say.

“The world’s assets hinge on what the European Central Bank, the Bank of Japan and Fed do now, in the coming months and in 2017,” says Jeff Reeves, executive editor of InvestorPlace.com.

However, either a Hillary Clinton win or Donald Trump victory carries potential downsides for investors, according to most respondents. “Each one presents different policies and different risks, especially with regard to anything cross-border from trade to immigration and industries affected by those things,” says Robert Brusca of FAO Economics.

We asked the mavens for a range of forecasts about stocks, the election impact and interest rates. See where they believe things are heading.

Asking experts: How do we invest after the vote?

Here's what stock market experts said when we asked them: Will investors need to move differently, depending on the vote?

Where will stocks be 1 year from now?

A solid 79% of the experts responding to our survey say the benchmark Standard & Poor’s 500 stock index will be higher at this time next year. The average response on where, specifically, the S&P will be is a little more than 1% above where the index stood at the end of the survey period. 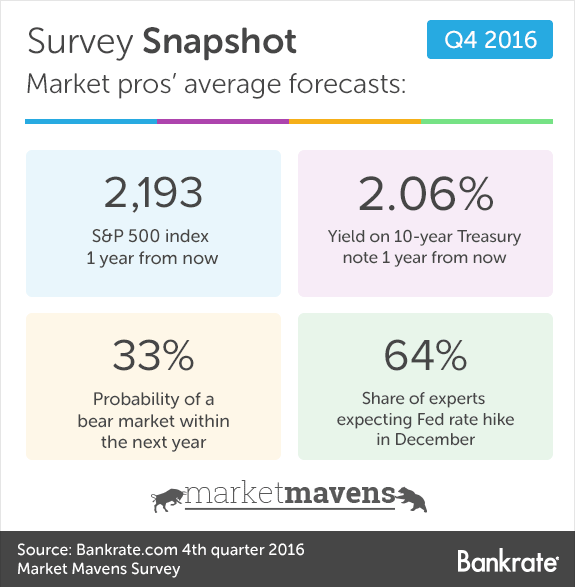 Will investors need to react to the election?

Simply put, the financial minds believe that the outcome of the election matters to investors. Without wading in on the question of Clinton versus Trump, a majority say investors will need to make decisions differently based on the outcome of the White House race.

“If Clinton wins, it will be the status quo for investors. If Trump wins, there will be a great deal of initial uncertainty over policies, which will increase volatility in all markets,” says Mark Willoughby, senior vice president of Hilliard Lyons. “Investors should be very agile early in a Trump administration.”

What are the chances of a bear market?

A bear-market decline of 20% or more in the stock market is seen as unlikely, according to the collective judgment of our experts.

As a group, they give odds of about 1 in 3 — pretty close to what we’ve been told over the past few quarters.

Among those putting the odds lower, at 20%-25%, is Chris Zaccarelli, chief investment officer of Cornerstone Financial Partners. “In order for a bear market to develop we will need to see caution cast aside, much more bullish attitudes and lofty predictions of future growth and reduced cash positions,” he says.

Putting the chances of a bear market at an even lower 15% is Sam Stovall, U.S. equity strategist for S&P Global Market Intelligence. “All bull markets since World War II that lasted longer than 4 years went out with a bang, not a whimper,” he explains. “Investors will likely become overly confident, not cautious, before this bull comes to an end.”

US or global markets for best returns?

Looking abroad for gains? When asked whether the U.S. or international equities would perform the best over the next year, the global approach won out by a slight margin.

Among those favoring U.S. stocks is Kim Forrest, senior equity analyst with Fort Pitt Capital Group “The U.S. seems to still be ahead of the world in recovering from the banking crisis,” she says.

More than one-fifth of the respondents say the results will be about the same, including Jeffrey Hirsch, editor in chief of Stock Trader’s Almanac. “We are all stuck in a rut until fiscal policy gives growth a boost,” he says. “Monetary policy averted disaster, but has failed to create sustainable growth.”

Do you like finding a bargain or want to ride momentum? The financial experts choose value stocks over growth stocks by a ratio of better than 4-to-1.

About 1 in 5 said the results should be about the same over the next year.

Charles Lieberman, managing member and chief investment officer of Advisors Capital Management, suggests it’s time for the pendulum to swing. “Growth stocks have outperformed, so value equities should catch up,” he says.

When will the Fed raise rates?

Mirroring the consensus among experts in general, most of the mavens say Federal Reserve policymakers are likely to raise interest rates at their December meeting. “The rate hike is after the election,” predicts Charles Carlson, CEO of Horizon Investment Services.

But more than a quarter of the experts say the next rate increase will come sometime next year. “We think any rate increase by the Fed this year will cause significant volatility in the capital markets, including capital flight from the emerging markets and a spike in the value of the dollar,” says Michael Farr, president of Farr, Miller & Washington. “This will make it very difficult to follow through with a hike this year, especially given all the political uncertainty.”

Look for this benchmark interest rate to rise a bit over the next year, coinciding with the Federal Reserve’s expected action. On average, the financial pros expect the yield to move to about 2%, compared with the 1.62% level where it stood as the survey closed.

Only about 1 in 5 of those surveyed expect to see the yield at 2.5% or higher a year from now.