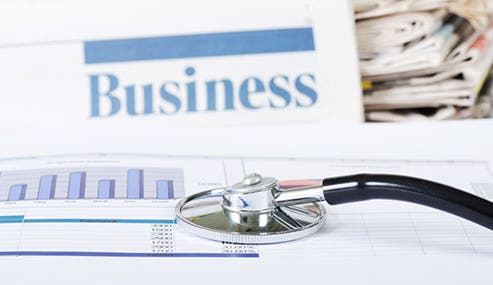 The prognosis for health care stocks is rosy.

After riding a wave of uncertainty, health care company vital signals are now turning favorable. President Barack Obama’s re-election and the Supreme Court decision in June to uphold the Affordable Care Act could help to lift many subsectors in the $1.6 trillion health care industry, including biotechnology and medical devices.

As a result, more analysts are jumping on the bandwagon for health care stocks, calling them solid long-term investments. For example, Standard & Poor’s Capital IQ, the ratings and research service, notes that many health care subsectors are poised to post above-average earnings growth in 2013.

But that’s not all. Demographics are on health care’s side, with 77 million aging American baby boomers fueling health care growth as their medical spending increases.

Still, some subsectors in health care will prosper more than others, Morozov says. Here’s how to spot the winners.

But there’s a catch. Big pharma relies heavily on blockbuster drugs such as Lipitor or Zoloft, with long patents to drive their cash flow, and many big companies ran off that all-important patent cliff in the past several years. So investing success hinges on finding drug companies with strong pipelines. These products should be in the early launch phases, says Mark Bussard, a former health care analyst at T. Rowe Price. For example, Eli Lilly has a new Alzheimer’s drug in the works.

S&P Capital IQ, which is bullish on pharmaceutical companies, prefers exchange-traded funds, or ETFs, that hold Big Pharma stocks as a way to play this subsector.

The next 10 years will be biotech’s golden age, says Sam Isaly, manager of the Eaton Vance Worldwide Health Sciences Fund. The reason: Biotech companies have fat pipelines, pushing through more new drugs than ever. And they’re also creating breakthroughs in stubborn health problems such as cancer and heart disease, he says.

However, Bussard says new drugs also bring substantial risk should they fall short of their treatment expectations. “And no biotech company has a perfect batting average,” he says.

In addition, biotech companies run the gamut from big firms to microcap companies reliant on one product, so don’t invest more money in biotech than you’re willing to lose, Bussard says.

Isaly suggests investing in a diversified biotech mutual fund. There are also seven biotech ETFs, which can help to spread out risk, according to ETF Database.

The medical devices subsector is strongly tethered to the economy. “When it’s soft, patients defer elective surgery,” Morozov says. However, the outlook is increasingly promising. In 2013 and 2014, there will be upticks in medical-device demand, he says. It’s also rising in emerging growth countries, Morozov says. People are aging there, too, and they’re less healthy, creating demand for devices there, he says.

The health care services subsector includes hospitals and managed-care providers. “They’re most affected by health care reform,” says Sheryl Skolnick, co-head of research at CRT Capital Group LLC in Stamford, Conn. According to a Congressional Budget Office report, the Affordable Care Act will cover an additional 30 million nonelderly people without health insurance. However, hospital and managed-care provider stocks will be volatile for now, Skolnick says, since the government hasn’t finalized all the insurance exchange rules, and some states are lagging as well.

As a result, health care services stocks will be volatile for the next 12 months, Skolnick says. “This niche is not a no-brainer,” she says. Skolnick suggests investing in highly diversified companies for now until the new regulations are written.

Longer term, growth in health care services stocks will accelerate, she says. In the meantime, she advises a look at managed-care providers. Cigna Inc. of Philadelphia and Bloomfield, Conn., and WellPoint Inc. of Indianapolis are two examples because they generate lots of cash. They also have stable ongoing dividends that can be increased, she says. She also likes large, geographically diversified hospital companies. “They’re strongly positioned and well-capitalized,” she says.