With bank card fees and hefty interest rates on the rise, credit cards from a credit union could make better financial sense than a traditional bank-issued card. Credit unions, which are nonprofit financial cooperatives owned by their members, usually offer more reasonable rates and fees on their credit cards than banks.

The average annual cost of ownership for a credit union-issued credit card is about 50 percent less than that of the average bank-issued card, says Schenk, citing a mean of $47, compared to the bank-issued cards, which average $101 a year to own.

Those who tend to carry large balances and pay high interest rates might benefit from a credit union-issued credit card, like the USAA Rate Advantage Platinum Visa. See Rates & Fees for specifics.

Depending on your eligibility, it may be possible to find a credit union card that offers perks comparable or better than that of traditional bank issuers, like the Alliant Cashback Visa Signature, which offers an industry-best 3 percent cash back on all purchases the first year and a still-stellar 2.5 percent after that.

Still, credit union cards might not be for everyone. Those seeking a premium rewards card may prefer the more robust perks and benefits offered by some banks and financial institutions. Before you make a switch, consider the pros and cons of credit union cards.

Lower fees and interest rates. Because credit unions are member-owned, they’re often able to offer lower rates and fees on their financial products than traditional banks.

Consumers who routinely pay a few days late or carry a balance may also find that a credit union card is much cheaper to use than a bank-issued card.

Besides lower APRs on new purchases, late fees on credit union cards are also typically lower than on bank cards. Credit union cards currently impose a median late fee of $22.50, while bank cards charge $35 on average, according to CUNA’s Schenk.

Approval may not be easy. You have to become a member of a credit union before you can apply for one of its credit cards.

Most credit unions restrict their membership to particular communities, employers or organizations. For example, Navy Federal Credit Union serves Department of Defense members and their families.

Check with your employer and any groups or associations to which you belong to see if you’re eligible to join a credit union. You can also try the credit union locator tool asmarterchoice.org, which is run by the Credit Union National Association (CUNA).

To join you have to buy what’s known as a “par value” share in the credit union, which typically requires opening an account with a one-time deposit.

Make sure the APRs at credit unions for which you’re eligible really do have better rates than those offered by banks. For example, Simmons First, an Arkansas community bank, is an example of a bank that offers a rock-bottom 10.25 percent APR on its Simmons Bank Visa Platinum Rewards Card.

Those who typically carry a balance should look for the lowest interest rate, regardless of the issuer.

Few options for “bad credit.” If you have less-than-average credit you may have trouble qualifying for some credit union cards. Check your credit score before you apply so you know if you’ll be eligible. Some credit unions also offer secured cards for those with little to no credit at terms that are typically more favorable then profit-driven banks. 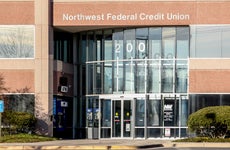