As economy reels, millions have no savings 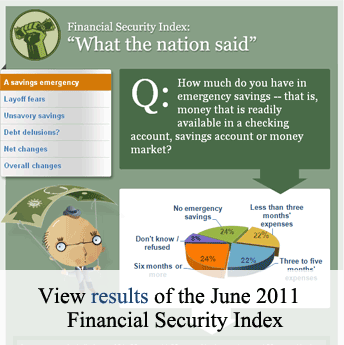 Saving for the next recession isn’t easy when you haven’t recovered from the last one.

That might be one way of interpreting this month’s Financial Security Index. The monthly poll found American families are woefully underfunded for financial emergencies, even as growth is slowing and the unemployment rate has begun to tick back up. As the accompanying slideshow and story show, roughly 75 million Americans have no cushion at all for when hard times hit. And another fifth of Americans say their savings would run out in 12 weeks or less if they had to live on it.

It doesn’t take an economist to see why many households aren’t prepared for a financial emergency. Simply put, they’ve been dealing with one for years now. And it doesn’t help when a stalled economic recovery appears to be losing even more steam.

That’s perhaps why this month’s overall Financial Security Index dropped a notch from May. Besides savings, the survey showed Americans feeling more concerned about job security, net worth and their overall financial situation.

One possible bright spot was a slight improvement in Americans’ comfort with their debt levels. Households entered the most recent recession with record-high debt loads. That won’t be the case should the nation suffer a new downturn, the poll findings suggest.

The following Financial Security Index slideshow and story give detailed reports about the sense of unease many Americans are feeling, and reveals how vulnerable millions of U.S. families are going to be if an emergency strikes.