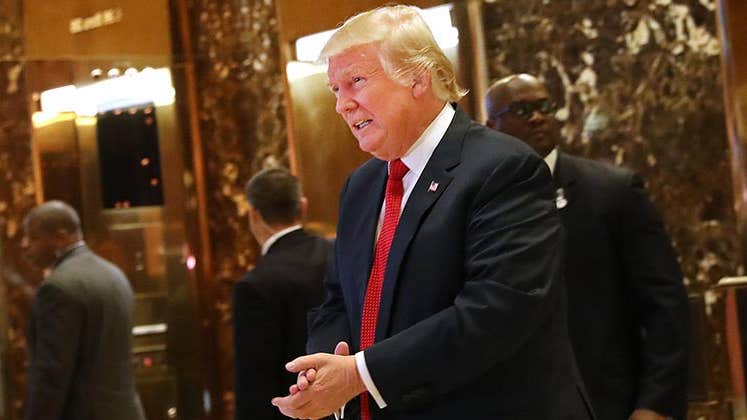 If you want to know how someone’s feeling about their finances these days, you’re better off asking them to see their voter registration card than their bank statement.

A new Bankrate survey finds that people’s feelings about their personal finances, and their outlook for their post-election future, are heavily influenced by their political leanings.

As you might expect, Americans’ partisan leanings exert powerful control over their personal financial outlook. With Donald Trump about to take over the White House and the GOP controlling both houses of Congress, almost 6 in 10 Republicans said they expected a positive impact, versus fewer than 1 in 10 Democrats (it was 27 percent for independents).

“Inherently, there’s going to be a certain level of bias based on who I voted for,” says Thomas Cooke, professor at Georgetown University’s McDonough School of Business. “If I voted for Donald Trump, I’m generally going to express more optimism about my future, whereas if I voted against Mr. Trump, I’m more pessimistic, more skeptical of things going down,” he says.

Even Democrats who may end up benefitting in dollars-and-cents terms from the new political regime may have a hard time seeing that right now, Cooke says.

“With this being a very close election and one candidate winning the Electoral College and the other the popular vote, there’s inherently support, enthusiasm and on the other hand, skepticism,” says Cooke.

Interestingly, taxes were the most frequently cited reason for why people’s finances would either prosper or suffer under Trump.

“We know that (Trump’s) position is apparently to have fewer tax brackets, which will make the middle class happy, increase in standard deduction, which should make the middle class happy because 70 percent of taxpayers take the standard deduction, so any increase there would be to their benefit,” Cooke says. “The rhetoric is that the middle class is going to benefit from these changes, although there is a debate as to, at the end of the day, who really winds up coming out ahead, because we haven’t seen the full details.”

Outside of taxes, the second biggest reason people cited for optimism about their finances post-election was that they expect to earn more income. On the other hand, the second most popular reason cited by those who are worried was that they’d face higher expenses in the future.

There were some differences in expectations across demographics that came into play both for and against Trump. Sentiments among white males, a key demographic for Trump, was most positive, with 36 percent saying they expected to see a direct benefit to their personal finances. On the other hand, women and black Americans, two demographic groups who broke heavily for Hillary Clinton, were much more likely to feel negatively about their future finances under Trump.

College graduates, who also broke heavily for Clinton, were more likely than other groups to fear for their financial futures.

Curiously, those making more than $75,000 a year, who are typically benefit financially from the kind of tax policies GOP politicians embrace, were fairly evenly divided on the effects of the election, with 34 percent saying that they see a positive impact versus 29 percent who say they see a negative impact.

Cooke says that ambivalence may be due in part to promises Trump has made to reduce itemized tax deductions, including placing limits on tax benefits of charitable giving and home mortgage interest, which typically benefit wealthier households.

A big swing in the Financial Security Index

Bankrate’s Financial Security Index, or FSI, asks Americans questions about how their savings, job security and other financial factors are now compared to last year to give a numerical expression of Americans’ level of financial security. Post-election, Americans’ outlook has dimmed slightly, while remaining in positive territory.

But when you break down sentiments along party lines, things get more interesting.

In October, self-identified Republicans had an FSI of 98, below the threshold of 100 that indicates they’re better off than they were a year ago. Democrats, on the other hand, showed an FSI of 106.

Then Donald Trump became President-elect. Sure enough, Republicans’ outlook on their finances dramatically improved, flipping from negative to positive and then some — 107.8, significantly higher than the country as a whole — while Democrats’ outlook worsened substantially.

Partisan political feelings exert a powerful pull on peoples’ answers to almost any question about the economy, even something as mundane as holiday spending intentions says Neil Malhotra, a professor of political economy at Stanford University’s Graduate School of Business.

“When you ask people in surveys that aren’t even about politics, but you have some information on the party ID, you find that Republicans are planning to spend more on Christmas presents than Democrats after their person is elected,” Malhotra says. “This could just be a euphoria effect, but some people have interpreted it to mean like they are actually expecting the economy to get better.”

“In counties that are very Republican, the consumer spending increases after the Republicans get elected versus the Democrats,” he continues. “So we do have some evidence that not only do people kind of claim on a survey that if their partisan controls the White House that they expect the economy to get better, but they seem to act on this as well.”

With all the election-year fireworks, it may be easy to lose sight of what’s a pretty decent outlook for consumer finances in 2017.

“We’ve added about 180,000 jobs per month on average so far this year,” says Gus Faucher, deputy chief economist at PNC Bank. “That’s about double underlying growth in the labor force and so we continue to reduce job market slack. You add on top of that, with the job market getting tighter you see businesses raising wages, and so that’s a positive for consumer incomes as well.”

And jobs aren’t the only bright spot, says Faucher.

“The stock market’s up as well, and house prices,” he says. “So they’re wealthier, they have more jobs, they have higher wages, and so conditions are pretty good for consumers right now.”