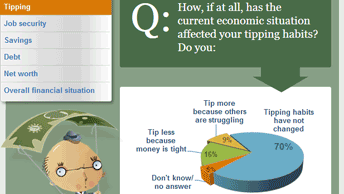 Penny pinching is America’s new pastime, but one sacred spending area may be non-negotiable: the gratuity. A new survey by Bankrate.com has found that 70 percent of Americans report their tipping habits have not been affected by the economy.

Only 9 percent of Americans tip more out of sympathy for struggling service providers, but 16 percent report they are now tipping less because money is tight, according to Bankrate’s latest Financial Security Index.

Unsurprisingly, people with the least amount of income are squeezing their tips the most. Nearly a quarter of people earning less than $30,000 per year said they have cut back on tips, as opposed to 9 percent of the highest-income earners — those raking in more than $75,000.

Americans may believe they are tipping as generously as ever, but that may be due to the way most people think about tips — in terms of percentages rather than dollars.

“What’s interesting is that roughly 80 percent of the country thinks about tipping in percentage terms and then about 20 percent thinks about it in dollar terms,” says Michael Lynn, professor of consumer behavior and marketing at the School of Hotel Administration at Cornell University.

The standard 15 percent tip may be the same in the mind of the diner, whether it’s a $150 meal or a $25 two-for-one special, but it’s vastly different on the receiving end.

That’s a development noticed by former waiter-turned-writer, Steve Dublanica. The author of the Waiter Rant blog, the eponymous book and his most recent book on tipping, “Keep the Change,” has found that most people trim down the extras when trying to be frugal. That, in turn, affects the gratuity.

“When I was waiting tables in 2005, I had couples come in and buy $200 bottles of wine. Then as the recession started to hit, the same couples would start ordering less — maybe a $50 bottle of wine. So the effect of that is that while the tip percentage has not changed, the bill has gotten smaller, the tip has gotten smaller and waiters have to work more to make the same amount of money,” Dublanica says.

More On Tipping And Financial Security:

“For my second book, I talked to exotic dancers in (Las) Vegas, and they’re experiencing the same thing. People still tip the same amount, but fewer people are going to their nightclubs,” he says.

This year has been generally more profitable for the service industry. Sales at restaurants have substantially improved over 2008 and 2009, according to the National Restaurant Association. Brad Masterson, communications manager for the Professional Beauty Association, reports that spending on hair and beauty has returned to relatively normal levels.

However, recent economic developments could be pointing to a dip in consumer spending.

Besides working more hours, there’s not much tip-dependent workers can do to boost their incomes. Research has shown tipping is less predicated on quality of service and more about social norms.

“The main reason people tip is because it’s expected, and they want to live up to those expectations. Whether it’s external pressure or they’ve internalized it, they don’t want to be judged badly,” says Lynn. “Seventy percent of the difference in tip amounts that dining parties leave is explained by bill size, and that’s because of the norms.”

To some extent, those on the receiving end of tips can enhance gratuities by establishing a connection with their customer or client, says Ravi Dhar, the George Rogers Clark Professor of Management and Marketing and director of the Center for Customer Insights at the Yale School of Management.

Using their name or drawing a smiley face on the bill may inspire a human connection and increase the tip, he says.

But even making a genuine connection with a bad tipper may not turn a Grinch into someone who’s overly generous.

“There are people who are just bad tippers. I always say they’re irredeemably cheap,” Dublanica says.