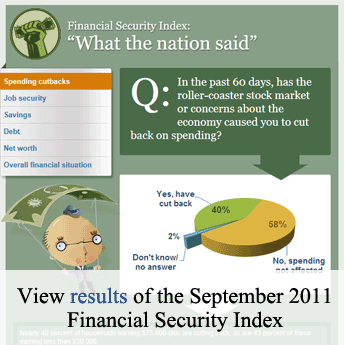 Families across the country find themselves coping with spending cutbacks as the economy flirts with a second possible recession.

A new survey from Bankrate.com reveals that 40 percent of Americans say recent stock market volatility and economic uncertainty have caused them to button up their wallets and reduce expenses.

It’s not hard to see why. The summer delivered a succession of dour economic news that even the famously spendthrift American consumer couldn’t ignore.

First, of course, there was political gridlock in Washington, D.C., over the debt ceiling, culminating in a U.S. credit downgrade by the rating agency Standard & Poor’s. Then, we learned the economy inched along at an annual rate of just 1 percent in the second quarter of 2011, a much slower pace than had been previously believed. In August, hiring came to a standstill with zero net jobs added to the American economy.

And then there’s the stock market. As July came to a close, the stock market became increasingly volatile. The Dow Jones Industrial Average lost about 15.8 percent through the first week of August. The index then recouped some of its losses, finishing the month down 4.3 percent, only to plummet again in the first weeks of September, unnerving investors.

The bad news wasn’t confined to the U.S., of course. Across the pond, the sovereign debt crises in Portugal, Ireland, Italy, Greece and Spain have only worsened with time, and they’re not going away.

Taken altogether, the negative news was enough to make many people think twice before forking over hard-earned money for anything beyond necessities.

Not everyone reacts to uncertainty by instituting cutbacks; 58 percent of respondents have not changed their behavior. The sense of fear some people experience when the economy turns topsy-turvy may be a matter of perspective.

“Typically, a person’s reaction is very tied to their attitude toward money and investing,” says Susan Hirshman, president of She Ltd. and author of “Does This Make my Assets Look Fat?” “Those who think of money as a means to avoid poverty tend to have stronger reactions than those who view investing as a source of gain. Not surprising, women tend to fall more in the poverty camp and men in the source of gain.”

Women were much more likely to say they have tightened their purse strings at 45 percent, versus 34 percent of men who have cut back on spending in response to economic uncertainty.

Though shifts and downturns in the broad economy can pose real dangers to individuals in the form of less stable employment and rising inflation, violent shifts in the stock market don’t necessarily correspond to the health of the economy.

For most working people, movements in the stock market will not impact their day-to-day spending.

According to the Financial Security Index, 40 percent of retired survey respondents say they have cut back on spending, matching the proportion of the general population.

“Within reason, cutting back is a wise strategy for retirees. This is a good time to look at your asset allocation strategy and the cash generated by your portfolio to determine if your needs and your portfolio are aligned,” says Mackey McNeill, CPA, CEO and president of Mackey Advisors in Covington, Ky.

By keeping plenty of cash available for spending in the near future, retirees can avoid drastic spending cutbacks as a result of market volatility in the present.

By following good financial practices such as budgeting, saving for emergencies and paying down debt, consumers of all ages can cushion themselves against financial shock.

“You need to be more focused on your own fiscal health and making sure you are creating an environment you cannot just survive in, but dominate in, regardless of a poor economic environment,” says Evan Shorten, CFP and president of Paragon Financial Partners in Los Angeles.

In addition to establishing good basic financial habits, investing for the long term can help consumers meet their savings goals over their lifetime. To invest successfully, use instruments that are in line with your risk tolerance and time frame to help you get through nerve-wracking periods of instability.

It sounds counterintuitive, but planning for the market to go down will also add to peace of mind.

“People should have portfolios constructed with alternative investment strategies in addition to traditional asset classes such as stocks and bonds. They should make every attempt to diversify not only across asset classes but with varying correlations as well,” says Bernard Wolfe, CFP and founder of Bernard R. Wolfe and Associates in Chevy Chase, Md.

“You don’t want all the pieces of your portfolio to move in the same direction, whether up or down. True diversification means always having a couple of investments that underperform. Assuming you are properly allocated, people should stick to their strategy and not let the daily headlines affect that long-term game plan,” he says.

Like the proverbial ant in Aesop’s fable of the ant and the grasshopper, consumers who plan for the worst can relax in hard times rather than react. Knowing you’ve done everything possible within your realm of influence will make it easier to live with events that are far beyond your control.

« Back to the Financial Security Index poll.