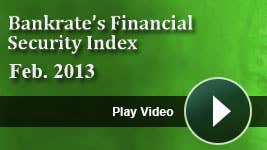 Rumors of the spendthrift American consumer may be slightly exaggerated. Bankrate’s 2013 February Financial Security Index found that a majority of consumers — by a narrow margin — say they have more savings than credit card debt.

For more than half the country, 55 percent, an emergency fund outweighs credit card debt. Nearly a quarter, 24 percent, admit to having more debt on plastic than money in the bank, while 16 percent say they have neither credit card debt nor savings. That puts 40 percent of the population close to the edge of ruin while everyone else seems to be sitting pretty.

If most people have more savings than credit card debt, “Why are so many people broke?” asks Howard Dvorkin, CPA and founder of ConsolidatedCredit.org.

It’s a curious question. The answer may be that although credit card balances came down through the financial downturn that began in 2007, consumers’ fundamental behavior of not saving enough did not change.

According to the Department of Commerce, for 2012, the overall savings of the average household were 3.9 percent, much better compared to the 0.9 percent Americans were saving in 2001. However, this is down from the average 5.4 percent savings rate in 2008.

“The fact of the matter is that America is broke — whether it’s mortgages, student loans or credit cards, we are broke. The old rule of thumb is that people should have six months’ of savings,” Dvorkin says. “If you talk to people, most don’t have two pennies.”

In Bankrate’s survey, men were more likely than women to say their emergency fund outweighed credit card debt, at 60 percent, compared to 49 percent of women.

“Credit card debt will eat you alive no matter who you are,” Dvorkin says.

While staying out of credit card debt is a good place to be, having no savings puts low-income earners in danger of falling into a payday-loan cycle or needing to borrow from family or friends.

“People who earn less than $30,000 may not have the credit score to get credit cards. That keeps them from getting into trouble with debt, but it also keeps them from saving,” says Xavier Epps, CEO and founder of XNE Financial Advising LLC in Woodbridge, Va.

For the rest of the population, there may be a fundamental divide between consumers who are fine with carrying credit card balances and dedicated savers who strictly avoid debt.

“It tends to be that debt and savings are very lumpy; you rarely find someone that has both. It’s either someone has a lot of debt and little to no savings, or someone has savings and very little debt,” says Elliott Orsillo, CFA, co-founder of Season Investments in Colorado Springs, Colo.

“There isn’t much of a fluid spectrum of people with a ton of savings and no debt and a nice mixture down to people with no savings and lots of debt. It’s usually either one or the other,” he says.

“One of my clients had $400,000 in credit card bills. He came to me because it was impeding his ability to fuel his jet. The credit card companies would not allow him to charge his fuel anymore,” he says.

No matter how much money you have coming in, learning to save and live beneath your means is the key to getting ahead.