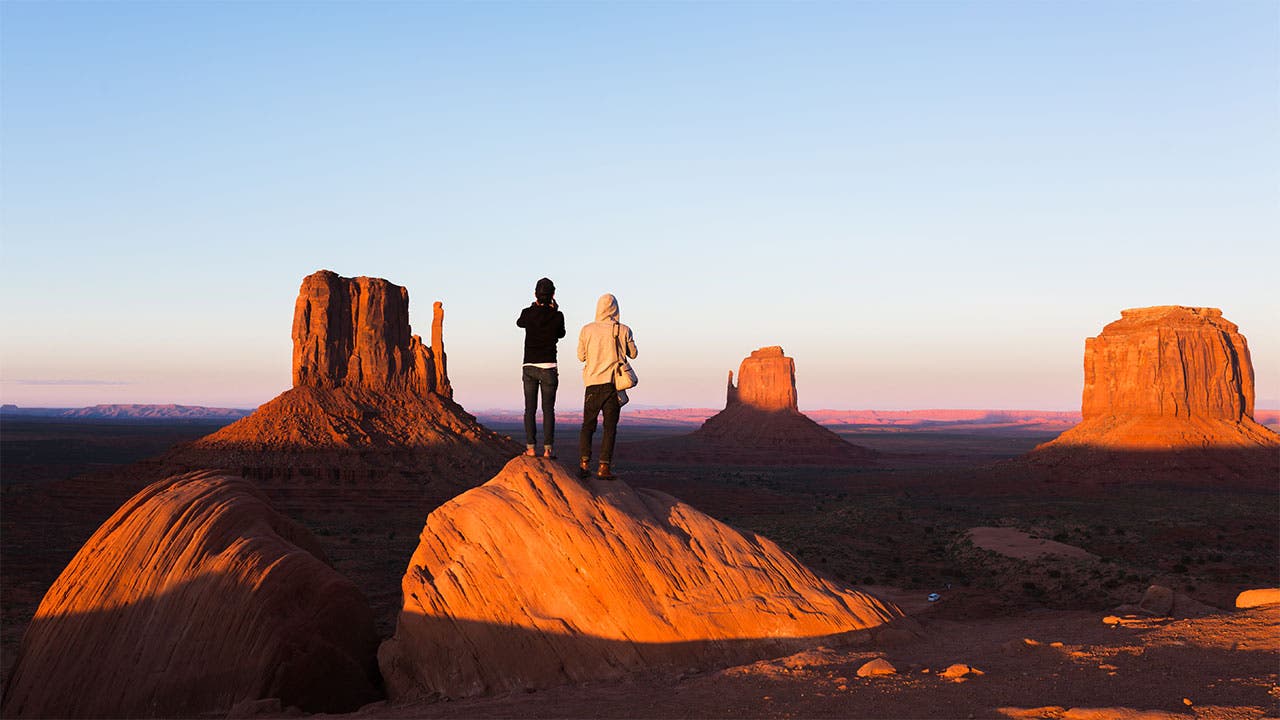 You were hoping to spend the summer backpacking across Europe, exploring the Mayan ruins or relaxing on the beach in Aruba. There’s just one small problem: You don’t have enough savings.

About half of Americans (49 percent) don’t plan to take a vacation this summer, according to a new Bankrate survey. And 1 in 4 respondents say they’re not taking a summer vacation because they can’t afford it. 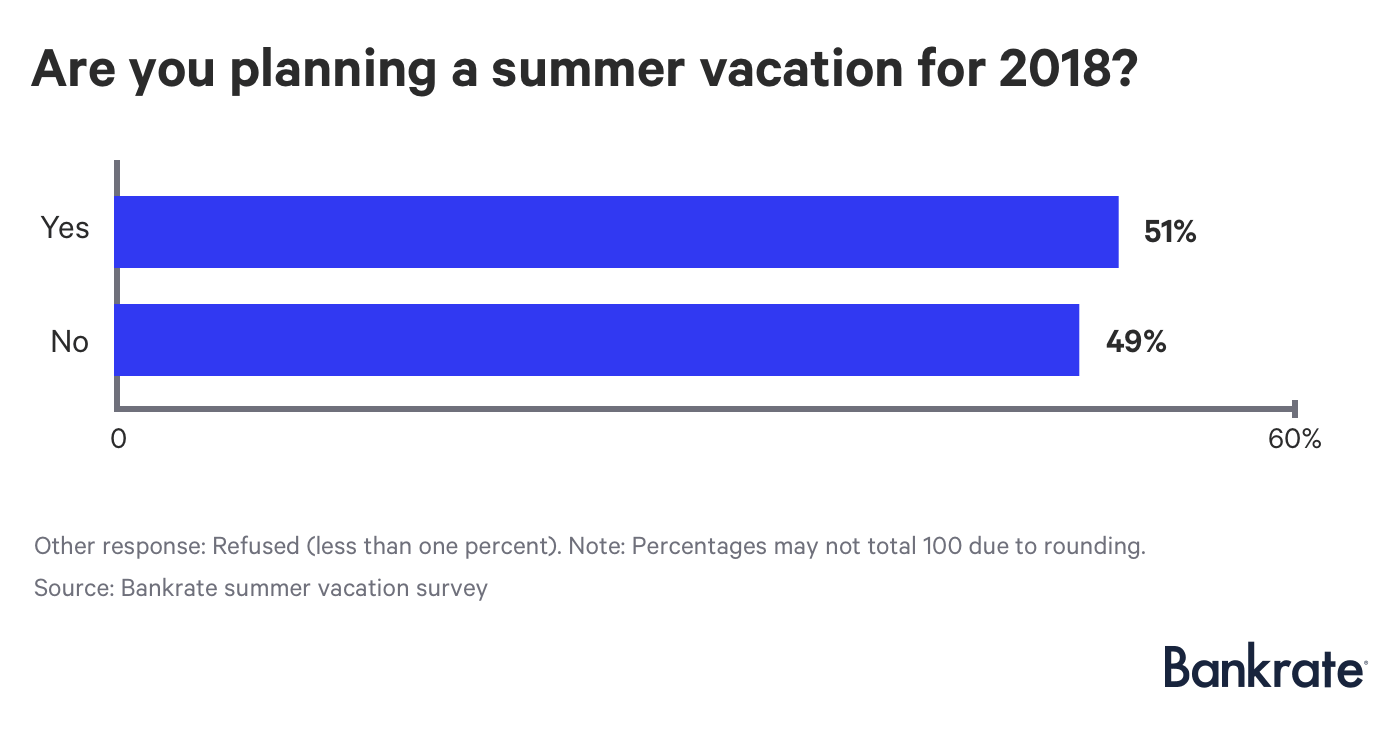 Carol Rose can relate. Normally, she would leave town and spend time at the beach. But for financial reasons, she’ll have to stay close to home this summer.

It’s only been a year since Rose started working full time again. On top of that, she’s going through a divorce. And in the fall, she’ll have a son and daughter in college at the same time.

“When you’re entry level after 17 years out of the workforce, you don’t get paid very much,” says Rose, a 51-year-old public relations and content developer in Phoenix. “It’s just not good timing. (A vacation) won’t happen this summer.”

Half of Americans (49 percent) say they have no summer vacation plans. Cost is the No.1 reason, with 24 percent of all respondents citing affordability as the biggest factor for not planning a getaway. Unemployment is low and wages are finally starting to rise, but many people are struggling to make ends meet.

“One in 4 Americans does not have any emergency savings,” says Greg McBride, CFA, Bankrate’s chief financial analyst. “Talk about living paycheck to paycheck.”

Older Americans are more likely to say they’re not going on vacation this summer due to family obligations rather than work-related commitments. Millennials are most likely to say they can’t go on vacation because there’s too much on their plates. They’re also more inclined to say that their financial situation is keeping them from taking time off. 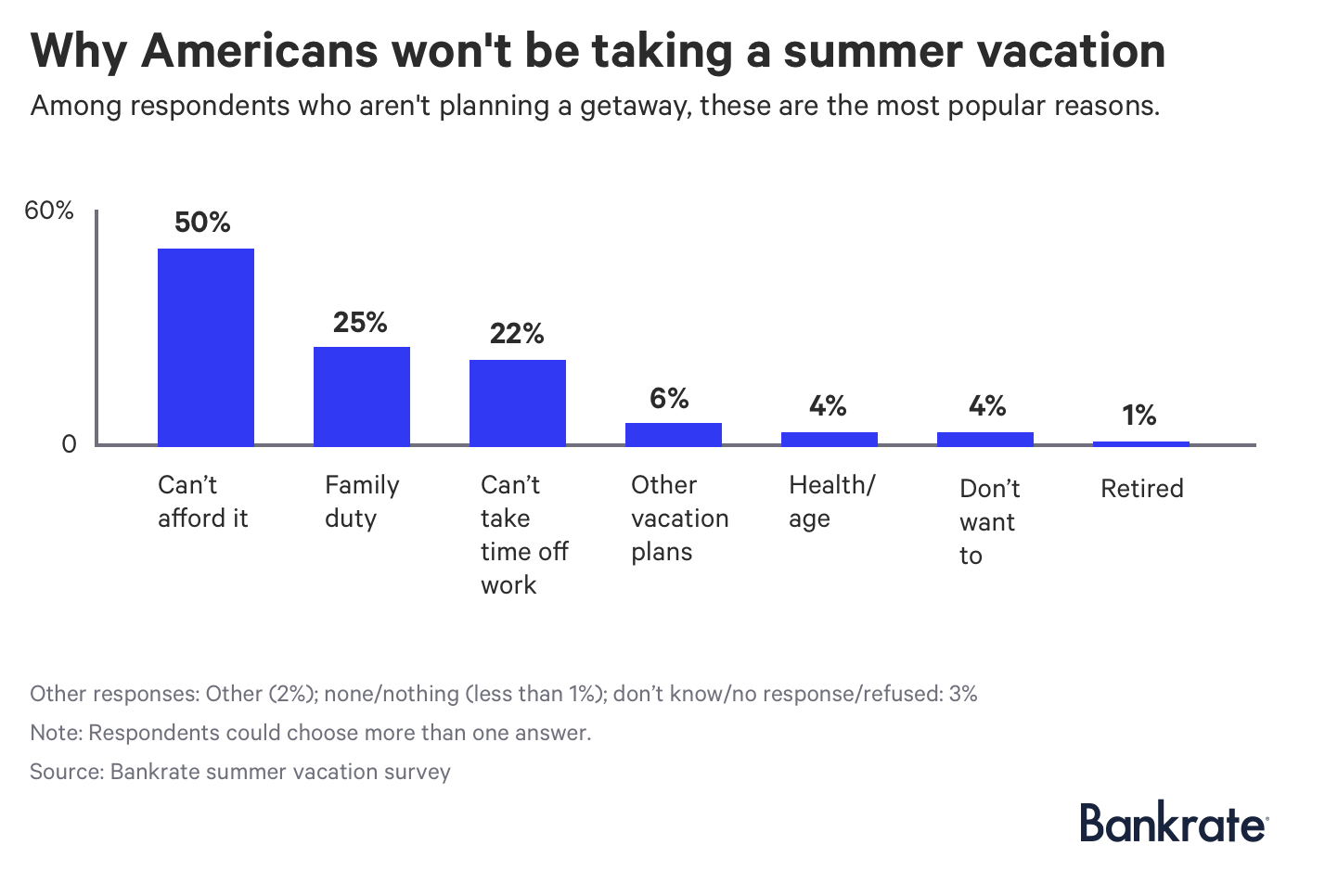 McBride points to issues related to workload and staffing as possible explanations for why many Americans aren’t taking time off.

“There’s 6 million open and unfilled jobs in the economy right now because employers can’t find qualified workers,” McBride says. “A lot of existing employees are carrying a heavier load, and that might keep them tethered to the desk instead of taking the time off that they would otherwise like to take.”

Consider spending a day or two away from the office even if you’re overwhelmed or you don’t have enough money saved for travel. And taking time off doesn’t mean you have to leave town.

“A vacation doesn’t necessarily have to be something where you fly somewhere,” says Melanie Ross, a senior financial adviser for NCA Financial Planners in Cleveland. “A lot of people do something they call “staycations,” where they just will stay local. Maybe they’ll travel two hours here in a two-day period or stay at home and take advantage of things that they don’t have time to while they’re working.”

Better yet, consider delaying your vacation and traveling during an offseason, Ross says. Your trip may be more affordable, and waiting to go away will give you more time to save money. Open a high-yield savings account or a certificate of deposit that’s specifically designed to hold the money you’re planning to use during your trip.

Summer vacation spending, by the numbers

Among survey respondents who plan to go on vacation this summer, the median amount they intend to spend is $1,000. Millennials are most likely to spend that amount or less. Their older peers and parents are more likely to spend more than $2,000.

If you live in the Northeast, there’s a good chance your summer vacation will cost more. The median amount folks in that region plan to spend this summer is $1,500.

Research shows that a vacation for a family of four costs more than $4,000, on average. But there are ways to get away this summer without sinking deeper into debt. 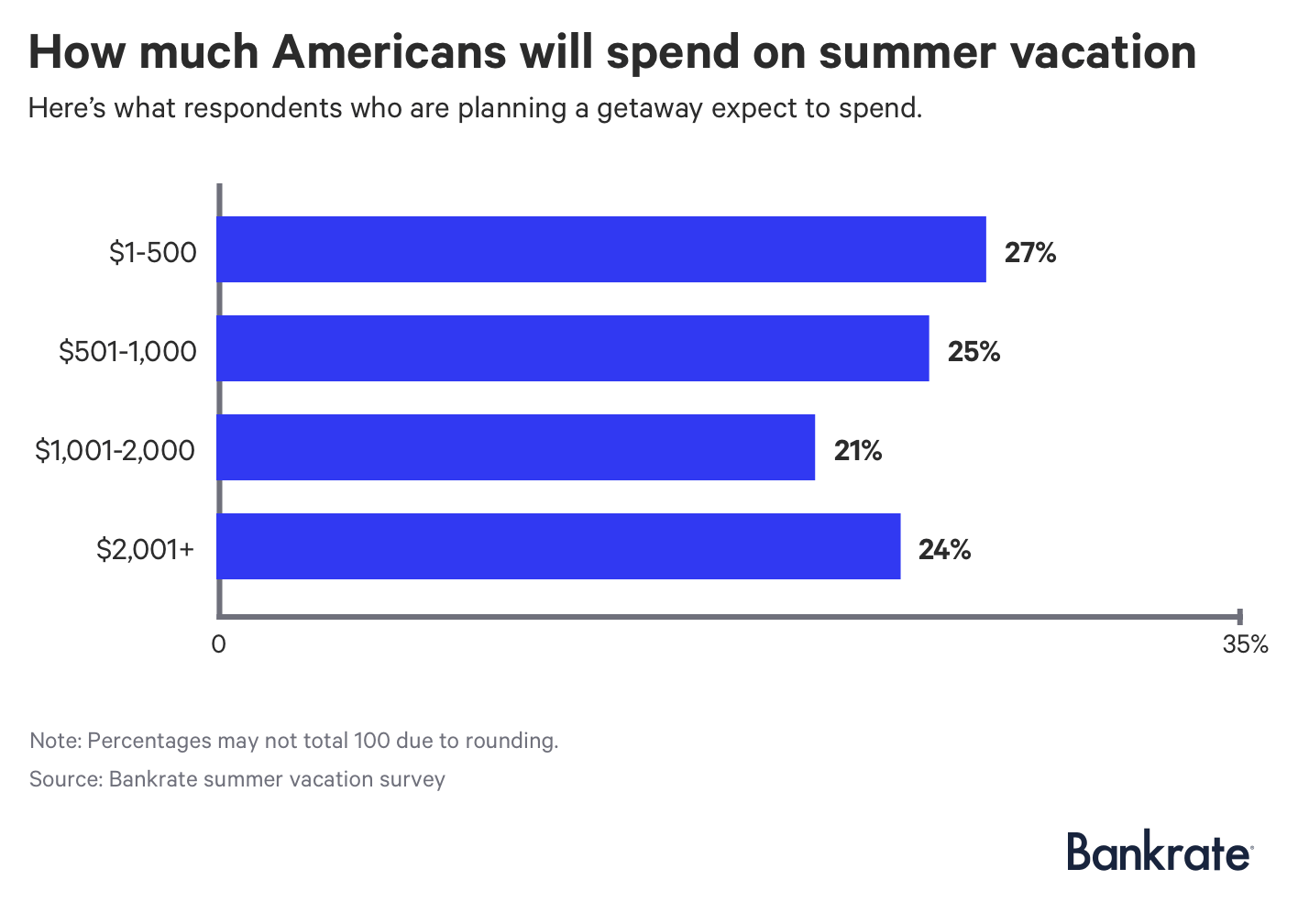 How to travel without busting your budget

Consumer finance expert Andrea Woroch recommends being flexible when it comes to choosing travel dates and destinations. That’s one way to get great deals on hotels and plane tickets.

To save money on airfare, compare prices at different airports and consider booking one-way rather than round-trip flights, Woroch says. She also recommends opening a co-branded airline credit card to get bonus miles that you can use toward a free flight. As long as pay your credit card balances on time and in full every month, it’s OK to open a rewards credit card that can potentially reduce the cost of your summer trip.

Saving money on housing is a breeze thanks to sites like Airbnb and VRBO. And if you’re planning to stay at a hotel, take advantage of amenities like free breakfast, parking, Wi-Fi and shuttles, says Carrie Sumlin, digital consumer executive at Ally Financial.

Consumers who want to travel abroad should choose destinations with favorable exchange rates, Sumlin says — places like Mexico, Iceland and New Zealand. Just make sure to do your research to avoid overspending at restaurants and other places where you think you’ll be expected to tip.

“Understanding the local customs around tipping and gratuity is really important,” Sumlin says. “You could essentially overtip in a situation where it is not necessary or not required.”

This study was conducted for Bankrate by GfK Custom Research North America on its OmniWeb online omnibus. The sample consists of 1,000 completed interviews, weighted to ensure accurate and reliable representation of the total population, 18 years and older. Fieldwork was undertaken May 4-6, 2018. The margin of error for total respondents is +/- 3%.