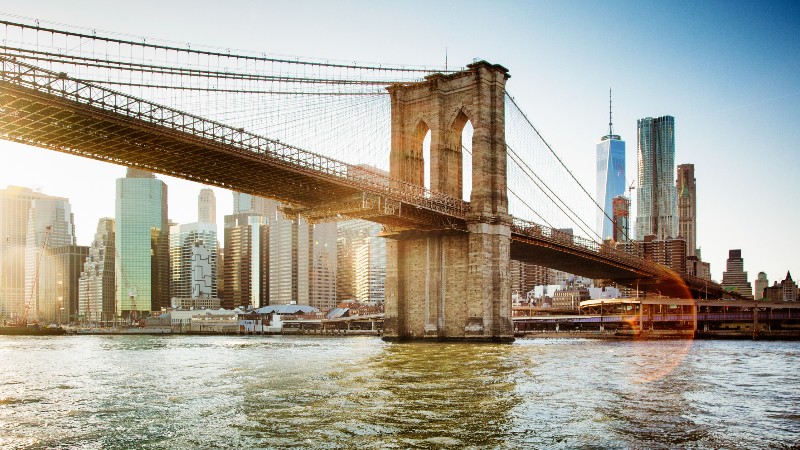 When it comes to getting around, New York City is well-known for its extensive subway system and network of taxis and buses. However, the city is also home to millions of individual automobile drivers across all NYC boroughs.

When compared to the rest of the United States, New York City’s auto insurance rates are above average. In fact, New York state‘s average annual expenditure is $2,205 for full coverage and $962 for minimum insurance, making it the second-most expensive state in the country for car insurance. There are a range of factors that play into how much New York City insurance will cost, including the geographic region in which you live, your age and your credit score.

When you’re shopping for a new auto insurance policy in New York City, be sure to consider whether you need additional coverage based on how often and far you drive, the degree of safety/security where you park your vehicle, the value of your car, as well as your current financial situation and amount of coverage you carry.

J.D. Power is renowned for delivering feedback from consumers in an unbiased manner. Their Power Circle Ratings represent the testimonials of customer insight from around the world. J.D. Power awards companies with a maximum score of 1,000. Read on to see how NYC’s top auto insurers stack up when it comes to consumer feedback.

Erie provides some of the cheapest car insurance in New York City, with average full coverage premiums of $3,269 per year. Although Erie isn’t rated by New York drivers as one of the top car insurance providers, it’s probably because it’s a smaller insurance carrier. Erie ranks consistently in the top three in a few other U.S. regions.

J.D. Power consumers in New York gave MetLife enough praise to earn the company a “Better than most” rating, as it racks up 832 points out of 1,000. Annual full coverage premiums average at $9,273 for drivers covered by MetLife in New York City.

Progressive provides the cheapest car insurance in New York City, with average annual rates of $1,440 for basic coverage. Progressive’s affordable premiums are the reason you should shop around for car insurance — coverage costs nearly half when compared to NYCM and State Farm.

State Farm accounts for 851 points out of the possible 1,000 awarded by J.D. Power’s responders. New York City drivers covered by State Farm can expect to pay around $3,992 on average for an annual premium with full coverage.

New York City is the fourth most congested city when it comes to traffic in the United States. With so many drivers in such a congested area, it’s no surprise that the number of motor vehicle accidents per month is staggering. Traffic congestion in NYC costs commuters about $1,860 per driver.

In July 2019 alone, there were more than 18,000 accidents city-wide. These incidents involved 36,164 motorists, 1,816 passengers, 528 cyclists, and 663 pedestrians. These accidents resulted in 3,980 injuries and 18 fatalities. The majority of accidents in July 2019 occurred due to distracted drivers.

Aside from traffic congestion and collisions, another factor that affects vehicle safety in New York City is the rate of car break-ins. In 2017, there were more than 20,000 vehicle burglaries and break-ins across the city.

Because of this risk, it may be beneficial to invest in anti-theft security measures to protect your vehicle. These additions can also help reduce your car insurance premium. In fact, New York state law requires insurance carriers to provide a discount to drivers who do just that.

A variety of factors come into play when calculating your New York City insurance premium. For example, the geographic area in which New Yorkers live plays a significant role in determining their cost of car insurance.

If you’re shopping for auto insurance companies in New York City, it’s important to consider the state minimum requirements. According to the New York Department of Motor Vehicles, you must maintain the following liability coverages:

How to get the best car insurance

You’ll need to do some research upfront to get the best car insurance in the Big Apple.

To help offset the cost of your car insurance, make sure to consider discounts you may be eligible for when you compare insurance companies in New York City.

How can I reduce my New York City insurance premium?

What types of optional coverages can I add to my New York City insurance policy?

Beyond the required auto insurance coverages mandated by the state of New York, you can also add the following coverages to bring you the most value:

Read more From Cynthia
Cynthia Paez Bowman is a finance, real estate and international business journalist. Besides Bankrate.com, her work has been featured in Business Jet Traveler, MSN, CheatSheet.com, Freshome.com and SimpleDollar.com. She owns and operates a small digital marketing and public relations firm that works with select startups and women-owned businesses to provide growth and visibility. Cynthia splits her time between Los Angeles, CA and San Sebastian, Spain. She travels to Africa and the Middle East regularly to consult with women’s NGOs about small business development.