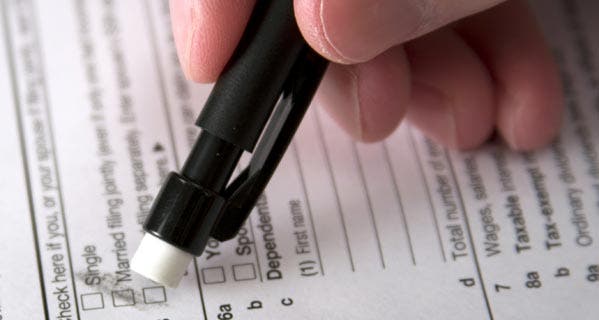 The most common tax filing mistake year-in and year-out involves math. We taxpayers were particularly error prone on our 2013 returns.

In fact, according to the IRS in its recently released 2014 Data Book, the agency caught almost 2.3 million math mistakes.

And that’s even though most of us, either via tax professionals doing our 1040s or working on them ourselves, use computer tax software with built-in calculators. I shudder to think of the math errors we might have made if we’d all been using pencil to fill out paper returns.

Many kinds of math mistakes

As noted in Bankrate’s story on the 10 most common tax-filing mistakes, math errors are more than just messing up addition, subtraction and multiplication.

The most common math error found on 2013 returns was associated with calculation of income or other taxes. This includes not just errors in figuring out the tax owed, but also miscalculating when it comes to other taxes, such as self-employment tax, alternative minimum tax and household employment tax.

All these various errors accounted for 26 percent of the math mistake notices the IRS sent last year.

A distant second at 14.3 percent in the math miscalculation category is exemption number and/or amount mistakes.

Mistakes in connection with deductions, either standard or itemized, were the third most common math problem, on 12.3 percent of 2014 notices.

A perennial calculation challenge, the Earned Income Tax Credit, or EITC, came in fourth place last year. Math mistakes on these claims for lower- to middle-income earners were noted on 11.3 percent of error notices send by the IRS in 2014.

Although it’s called a tax credit, as the repayment notation indicates, the first incarnation of this tax break back in 2008 really was an interest-free loan that taxpayers who claimed it have to pay back over 15 years. The first repayments began with 2010 tax year filings. On 2013 returns, 9.3 percent of math error notices were generated in connection with this homeowner tax break.

Nine other math miscalculation situations, each accounting for less than 5 percent of error notices last year, made up the remaining IRS mailings last year to taxpayers.

They included problems accurately reporting gross and taxable income, figuring refunds due or taxes owed and even filing status issues that can mess up a taxpayer’s math.

Even tax credits, which are a great way to reduce a tax bill since they lower what you owe dollar-for-dollar and in some cases could get you a refund, prompted plenty of math error notices.

Taxpayers had trouble on their 2013 returns claiming not only the EITC and first-time homebuyer credits, but also the child tax credit and the Hope, American Opportunity and Lifetime Learning education tax credits.

So as we head into these final weeks of the 2015 tax filing season, if you’re still working on your Form 1040, make sure your math is correct.

Did you get a math error notice from the IRS last year? If so, how much did it affect what you owed or the amount of refund you were expecting?