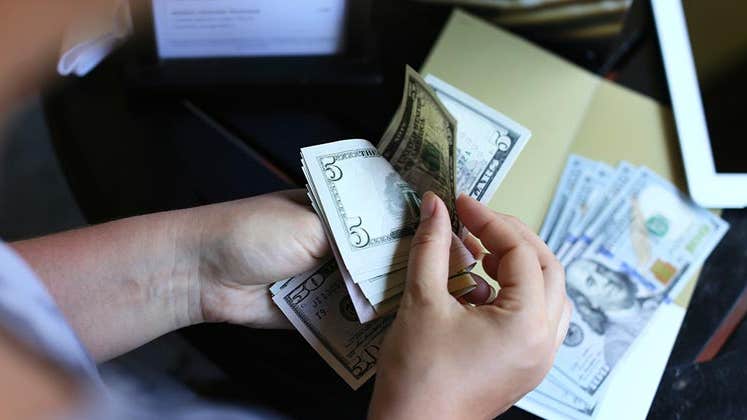 When Kurt Stahura lived in Singapore, he often traveled to Malaysia, China and Indonesia to play golf.

“Caddies carry your clubs on foot and management at the golf course pays them $7 a round,” Stahura says.

Stahura would tip them generously because his wife Kim had been a waitress.

“I give $40 because golf workers are from the local community, and their earnings depend on tips,” he says.

Stahura is like the 60% of U.S. respondents to a 2014 TripAdvisor survey on tipping who said they always tip for service on vacation, compared with an average 27% of respondents from 7 other countries, including Brazil, France, Germany, Italy, Russia, Spain and the United Kingdom.

Although Stahura chooses to tip, in many parts of Asia such as China and Japan, gratuities aren’t expected.

Tipping varies from country to country

“China and Japan are where the highest priority is placed on respect and giving a tip would be considered insulting or rude,” says Lisa Gache, author of “Beverly Hills Manners.”

In some countries in Europe and Asia, service charges are already factored into the price or included in the bill. For example, most restaurants don’t allow staff to keep tips in Greece.

“Abroad, it’s not unusual to have a tip returned,” said Jacqueline Whitmore, founder of The Protocol School of Palm Beach, in Florida. 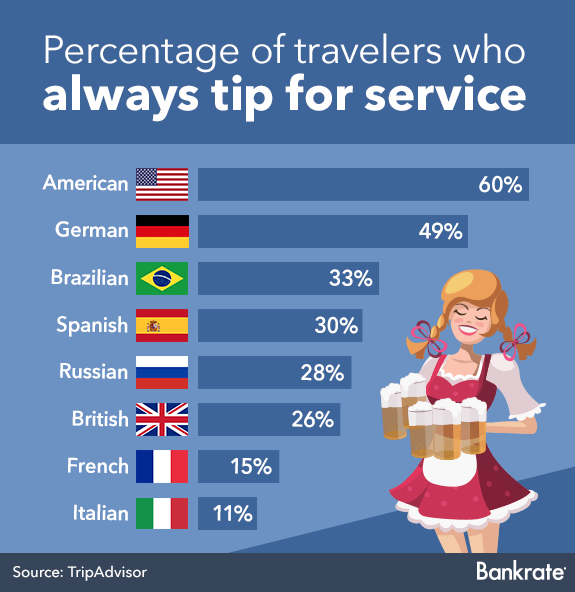 Bills in European restaurants, such as in France and Austria, carry a service charge that’s not paid to the waiter but to the owner, who, by law, factors it into the staff’s salaries. As such, tipping in France is less of a custom at dining establishments.

“We depend on tips to pay our living expenses in America because our servers aren’t paid as well as they are in these countries,” Whitmore says.

But some countries oppose gratuities to the extreme.

For example, in Australian restaurants, it is illegal for a restaurant to add anything to a bill that is not on the menu because service charges aren’t necessary to supplement workers’ incomes due to the high wages they’re paid, according to TripAdvisor.

The matter of what services deserve a tip when traveling abroad varies from country to country, as well.

For example, 81% of Americans will tip a taxi driver but only 22% will tip a coffee barista, according to TripAdvisor’s survey.

However, it’s illegal to tip taxi drivers in many parts of China and in India.

How Americans feel about tipping

Tipping is an acknowledgment that service jobs are thankless. But regardless of the quality or level of service, 23% of Americans tend to feel guilty if they don’t tip; 34% have left a tip despite poor service because they felt obligated; and 56% think tipping is expected, according to the TripAdvisor survey.

This attitude benefits service employees in Mexico, where they earn very little or no base salary.

Pesos are preferred because workers typically pay a discounted rate to exchange the currency, according to TripAdvisor.

“Ask an airline stewardess on the flight abroad, a tour guide or hotel concierge about what’s appropriate in advance of exploring a foreign country,” Whitmore says.

To tip or not to tip

In any given country, the percentage of a given tip is a choice, with a 10% minimum of the overall bill the most common.

“5% is the bare-bones minimum for international travelers on a budget,” Gache says.

About 54% of Americans traveling abroad say they tip spa staff. Tipping is customary for hairdressers, manicurists and aestheticians in Canada, for instance, but health club and pool staff are the least likely to receive tips.

“Service can be better and even exceptional when there’s the incentive of receiving a tip because workers will go out of their way when they think it will engender higher pay,” Niagara University’s Frye says.

When it comes to awkward situations, certain gestures to indicate that tipping is expected are universal, such as when a worker remains standing there after the service has been paid for.

If a tourist has tipped in a country where gratuities are not allowed, returning a tip is easily done without a fuss.