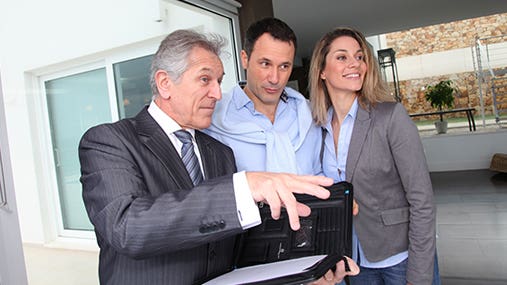 As the housing market heats up, many homebuyers and sellers grow frustrated over deals that fall through because of what they consider lowball appraisals.

But could these conservative appraisals be a blessing in disguise for buyers?

In some cases, the answer is yes, says Beth Spier, who recently walked away from a home that appraised for $20,000 less than what she had agreed to pay the seller.

“The house appraised at $310,000, and we had bid $330,000,” Spier says of the home she was under contract to purchase in Davie, Fla. She tried to renegotiate after the house was appraised, but the seller refused to reduce the price. Because of bank lending requirements, Spier would have to pay the $20,000 difference out of pocket.

“They wanted me to get the mortgage on $310,000 and pay the difference,” she says. “Sometimes it’s worth it when you think the value of the house is going to go up over time, but I didn’t see that there.”

Spier ended up buying another home with an appraisal that supported the purchase price.

Letting go of a home when the appraised value is lower than the contract price is not always as simple as it was for Spier. It’s especially a challenge when the buyer is in love with the house or believes the appraiser wrongly delivered a lowball appraisal. That is often the case with buyers of new homes.

“We have had so many appraisal issues that it’s unbelievable. Especially with new construction where the market has really turned around, the builders are raising their prices,” says Rob Nunziata, president of FBC Mortgage in Orlando, Fla. “It’s becoming almost a daily occurrence that I’m getting some type of complaint from builders, loan officers or buyers about appraisals.”

Nunziata says builders sometimes renegotiate prices of newly built dwellings, but often the buyer ends up paying cash for the difference between the appraised value and the price. Mortgage lenders issue the loan based on the appraised value, regardless of how much the buyer is willing to pay for the home.

“A lot of buyers are bringing the difference to closing,” he says. “Occasionally, the builders will work with the buyer to meet him halfway.”

Builders are raising prices of new homes mainly because the demand from buyers is greater than the supply of homes available, says Jennifer Creech, chief executive officer and president of InHouse Inc., a national appraisal management company. One of the appraisers at her firm cites a case where the builder raised the price of a home by $20,000 in less than a month.

While demand can push home prices up, it can also create a false market that is not sustainable. Appraisals should be driven by data and not potentially short-term trends, she says.

“The data just takes a bit of time to catch up,” she says. “Appraisers are looking at the past and not so much at the future. They have to make sure the trend is going to continue.”

Appraisers generally look at comparable sales that closed in the past six to nine months. When there are not sufficient recent sales in the same area to base their decision on, they struggle to determine the value of homes, says Phil Huff, chief executive officer of Platinum Data Solutions in Aliso Viejo, Calif.

Homeowners and buyers can help appraisers with info

That’s why it may be helpful for homeowners or buyers to tell the appraiser about recent sales in the neighborhood.

“They can’t put undue pressure on the appraiser to bring up the value, but they can supply information,” Creech says. “And even if an appraiser asks about recent sales, it doesn’t mean they haven’t done their job. They are asking because the sources that they are utilizing could be delayed.”

Appraisals can be flawed, but before blaming appraisers for failed deals, buyers and sellers shouldn’t forget that lax lending and appraisal standards contributed to the housing boom and bust that led to the financial crisis of 2008, Huff says.

“The overwhelming opinion in the industry is the pendulum has swung back in the opposite direction too far,” Huff says. “But what you are seeing now is the industry looking more closely for the underlying reasons for price increases so we don’t create another bubble.”

Until appraisals catch up with the market, sellers will have to face reality, and buyers will have to decide if they want to take on the risk when the appraisal doesn’t support the asking price, Creech says. She adds that she overpaid for a home in 2005.

“I’m not a fan of paying over the appraised value because I’ve had a very bad experience,” Creech says. “You have to decide what your tolerance for risk is.”

Should you dispute an appraisal?

But if you strongly disagree with the valuation and have evidence to support your theory that it’s a lowball appraisal, you can dispute the appraisal.

To start a rebuttal process, you will need to provide additional information that is not already included in the appraisal report, such as a recent sale, incorrect square footage or a finished room the appraiser missed.

Don’t get your hopes up. About 3 percent to 5 percent of appraisals overseen by her company go into rebuttal. Of those, only 10 percent get an adjustment, she says.

“But if there’s a bad appraisal, by all means you should get a good valuation,” Creech says.