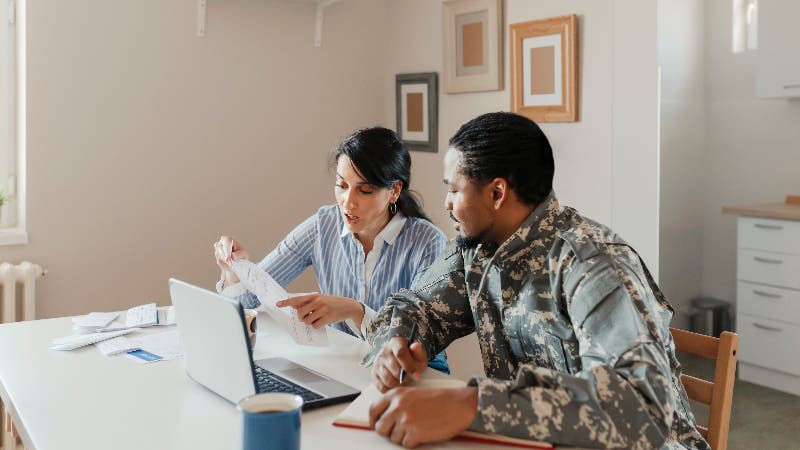 Military service members are twice as likely to be behind on their bills as they were five years ago. Roughly a third of service members say they don’t pay all their bills in a timely manner, according to a survey by the National Foundation for Credit Counseling, or NFCC. This compares to 16 percent who said in 2014 that they had trouble paying bills.

“These people face a different set of circumstances with regard to their lifestyle, how they manage debt and how they budget their household finances,” says NFCC’s Vice President of Communications Bruce McClary.

If they’re deployed in a war zone, for instance, staying on top of bills and worrying about debt may not be uppermost in their mind. Yet a late-payment status on their bills could impact their security clearances and career advancement in the military, says McClary. “This is vital to maintain as part of your military career track in some cases,” he says.

One way service members could get back on track is to consolidate their debt.

What is a debt consolidation loan?

Debt consolidation allows you to merge multiple debts into a single debt, rather than paying multiple credit card issuers or lenders separately. When you roll your debts into one payment from a single lender, you have the advantage of potentially paying it off at a lower interest rate.

Members of the military have a few options if they wish to consolidate debt.

Just as civilians, people in the armed forces can consolidate their debt by taking advantage of a credit card’s balance transfer offer with a 0 percent introductory interest rate if they qualify. Paying zero interest instead of the average credit card APR of about 17.3 percent, according to Bankrate data, can save you a lot on interest, boosting your chances of paying off debts quicker.

Taking out a personal loan is another option. This enables you to pay off several creditors at once by combining multiple payments into one loan, usually one with a fixed rate, and making payments to a single lender. A debt consolidation loan is typically used to pay off unsecured debt, such as medical bills, credit cards, payday loans and other personal loans. The ability to score a lower interest rate depends largely on a military service member’s credit score and income – the same criteria civilians face.

Active-duty personnel do have an edge, however, as they are entitled to receive a broad range of financial protections from the Servicemembers Civil Relief Act. One major perk is that interest rates are capped at 6 percent on various types of loans, including for credit cards, mortgages and vehicles – even those loans that originated prior to military service.

“That can help significantly, given the fact that the average credit card interest rate is about 19 percent for new lines of credit,” says McClary. But while this is beneficial, it doesn’t help in instances when bills are past due or if a soldier is generally having trouble getting caught up with bills, he adds.

Only service members, or veterans who already have a VA home loan, can take out a military debt consolidation loan if they want to refinance their mortgage and get cash out to pay off their bills. This only works if the appraised value of the home is higher than the amount owed on it.

For example, if you owe $100,000 on your home and its value is $125,000, it might make sense to refinance for its full value, which would free up roughly $25,000 in cash, especially if you get a lower interest rate than you’re paying on your current home loan. Keep in mind, however, that refinancing via a military debt consolidation loan involves paying closing costs.

“Taking credit card debt and consolidating it at a lower interest rate can be a smart move,” says McClary. “But one of the things you have to take into consideration is you’re taking unsecured debt and moving it into a loan where your home is on the line. So the stakes become much higher.”

Below are some advantages to getting a military debt consolidation loan:

The disadvantages of military debt consolidation loans are similar to those facing civilians:

If you’re deep in debt, first get in touch with your creditors to see if you can restructure your payments to get back on track. “Communication is key, and timing of communication is equally important,” says McClary. “It helps to ask questions and have conversations at an early stage, before the account slips past due.”

Certain lenders do feature special programs and interest rates, but you have to do your homework, comparing such offers against those available to civilians. “This is where people have to be really careful,” says McClary. “What seems like a special program may be just how it’s presented in the marketing.”

Consultation with a nonprofit credit counseling firm such as the NFCC and its members can help you fix your accounts, manage your budget better and get up to date with bills. Having a record of reaching out to such an agency can also help preserve your security clearance status. Just be sure that the consultation with a certified credit counselor is free.

A debt management program is also a possibility, where interest rates may be capped at 6 percent. But McClary warns against working with for-profit debt settlement companies. “Those types of debt relief often come at a high cost and in many cases they force you to become even more seriously delinquent on your accounts,” he says.

A VA Loan Modification is another alternative to an MDCL, but it’s mainly used to avoid foreclosure. In these cases, the lender rolls overdue payments into a new balance, enabling you to begin making payments on a new schedule. McClary says that these loan modifications are made permanent after a three-month trial period of successful payments.

The Department of Defense’s Homeowners Assistance Program (HAP) also provides financial assistance to its own civilian workers as well as service members, veterans and surviving spouses who face foreclosure.

A VA Loan Compromise enables military personnel to settle debts by appealing directly to the VA’s Debt Management Center. In this case, you can send a letter explaining why you are seeking to settle your debts, along with VA Form 5655. If your offer is accepted, be prepared to send a lump-sum payment within 30 days.

While reducing your debt, make sure to avoid payday lenders. The Military Lending Act of 2006 prevents service members from getting charged more than 36 percent on these consumer loans. While payday loans are notorious for charging consumers rates ranging from 400 percent to 1,000 percent, 36 percent is still exorbitant. McClary worries that many of these lenders aren’t compliant and that they may not be calculating the rate correctly. “They are not very transparent about their policy.”

If you find yourself with money troubles, consider reaching out to a military relief organization to get an interest-free emergency loan. These nonprofits exist specifically to assist members of the military: