This is what happens when you write a check 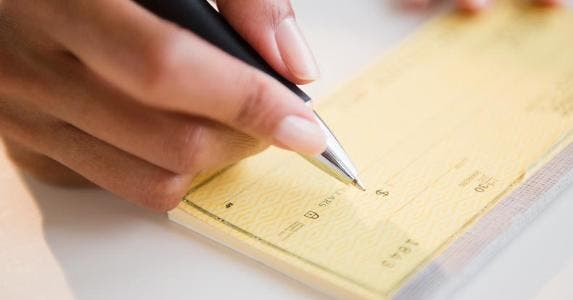 Americans wrote 12.2 billion fewer checks in 2012 than they did in 2006, according to the most recent Federal Reserve data. Consumers increasingly favored electronic payments and debit and credit cards for spending. Even so, financial institutions processed 18.3 billion checks in a single year.

That’s a huge amount of paper transactions that go … somewhere. Here’s what happens after you cut that check for your granddaughter, donate money to a nonprofit organization or pay your home repair contractor.

Diagram of a check

What’s on a check?

Who receives the check matters

What happens to a check after it’s written depends in part on whether it’s presented for payment to a business or an individual.

“Most items are sent through a scanning device that takes a picture of the front and back of the check, and then that image — along with the metadata and account number — is forwarded to the paying bank,” Jones says.

The scanner, designed especially for checks, is equipped with optical character recognition, or OCR, technology, which reads the “MICR line” on the bottom of the check and the handwritten or printed amount of the payment, says Sue Douglas, chief operations officer at SECU.

What is a MICR line?

Pronounced “mick-er,” MICR is an acronym for “magnetic ink character readable,” which refers to machine-readable text. The line is the row of numbers and symbols imprinted along the bottom of each check. Within the line are the bank routing and transit numbers and the customer account and check numbers.

Jones says small scanners can process about 45 checks per minute. Big ones can handle hundreds or even thousands that quickly.

Your smartphone works the same

Like a scanner, a smartphone app also can be used to turn a paper check into an electronic image. The app uses the phone’s camera to take pictures of the front and back of the check and then transmits those pictures to the bank when the check is deposited.

Everything is now digital

Once an electronic image is created, a check might be processed, or “cleared,” through the Federal Reserve’s national clearinghouse, a regional clearinghouse or a direct connection between 2 large financial institutions.

In 2006, approximately 43% of interbank checks were processed electronically, at least in part, according to the Fed study. But by 2012, the process had become virtually 100% electronic.

If payment can be made, the amount is credited to the recipient’s account. If not, the check is returned, usually electronically, to the financial institution where it was deposited. In 2009, banks returned, or “bounced, more than 127 million checks. In 2012, just 66.4 million checks were returned unpaid.

Banks don’t always make funds available as fast as a check can be processed. Instead, the bank might release part of the money and place a hold on the rest. Federal regulations set different hold periods for U.S. Treasury checks, state or local government checks, cashier’s, certified or teller’s checks, redeposited checks and checks deposited to new checking accounts, among other situations, according to a Fed compliance guide for banks.

Regardless of where a check is deposited, the original eventually should be destroyed.

“There are no prescribed requirements for the amount of time” a check needs to be stored, Ware says. Rather, the time frame depends on the situation.

What’s most important is that banks, businesses and consumers have procedures in place to make sure checks that have been deposited once aren’t deposited again.

“If, for some reason, the paper check fell into nefarious hands and was re-presented, it would come back through the system to the consumer who deposited it and be charged back to the consumer’s account,” Ware says.

The bank likely would charge the consumer a returned item fee.

“It’s a good practice,” Ware says, “for the consumer to destroy the check once they confirm that they have received credit.”