The most valuable college majors, ranked 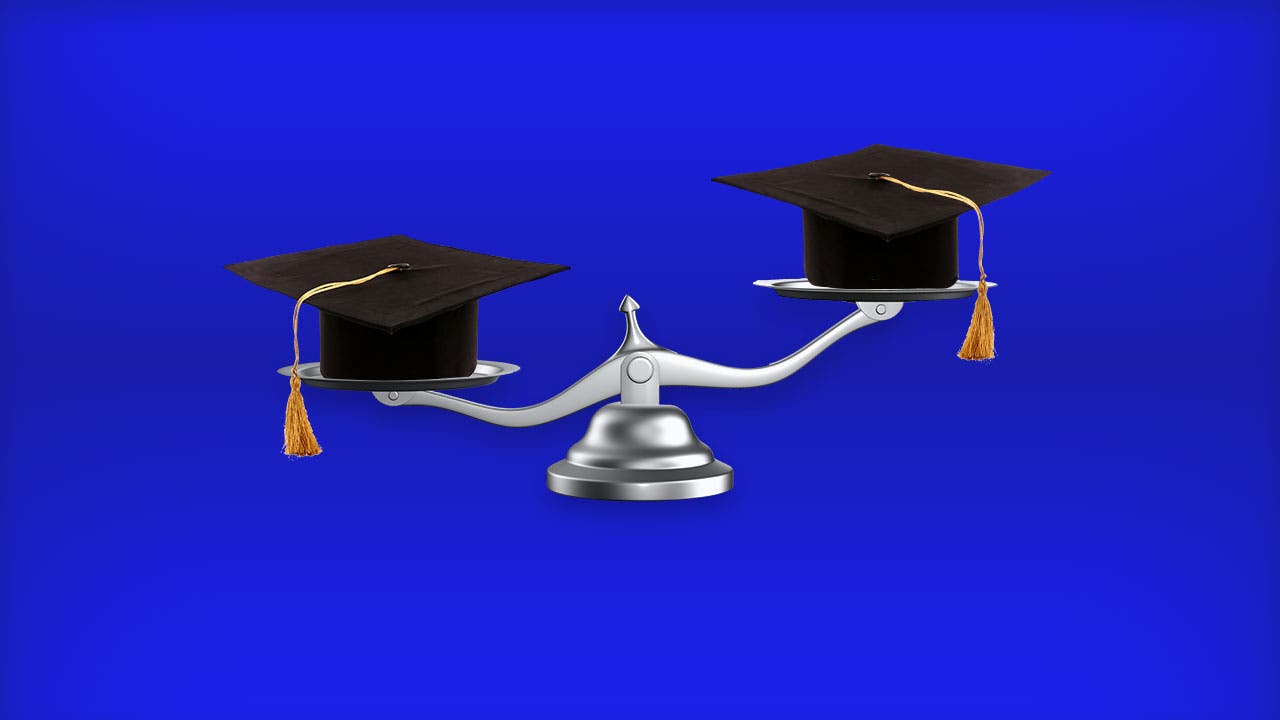 Avoiding calculus and chemistry classes in college could cost grads in the long run.

Grads with degrees in STEM fields — science, technology, engineering and mathematics — typically earn much more and are less likely to be unemployed.

Naval architecture and marine engineering takes the top spot on the list of most valuable college majors, according to a Bankrate study of 162 degrees. Drama and theater arts, on the other hand, is the least valuable, at least in terms of making a living after graduation. 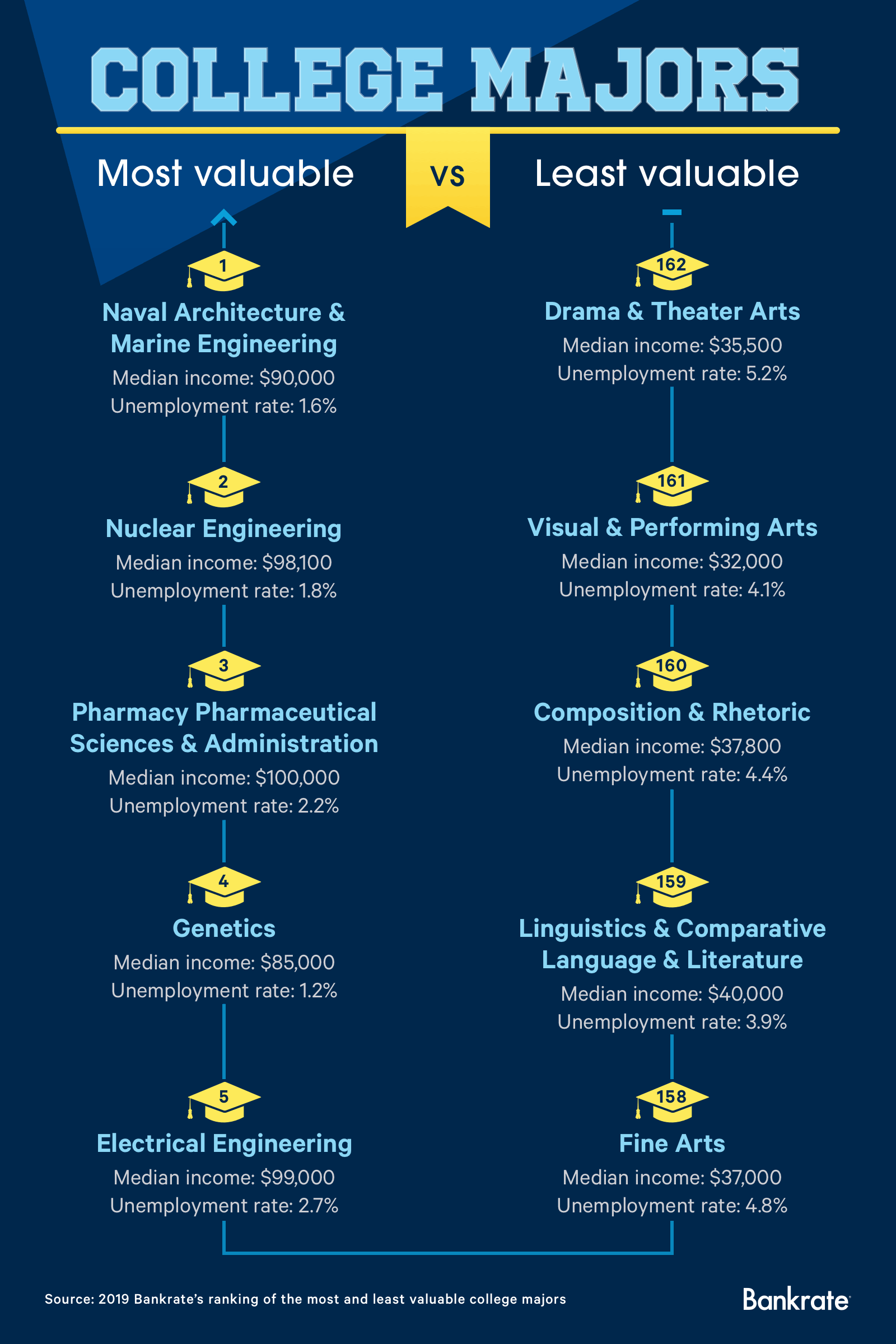 For the study, Bankrate looked at the median incomes and unemployment rates of people based on which bachelor’s degree they obtained in college. We also factored in how many people in each group obtained a higher degree, such as a master’s degree or doctoral degree, knowing additional schooling typically requires more time and money. Full details on our methodology can be found below.

Engineering degrees claimed seven of the top 10 spots in Bankate’s study. Naval architecture and marine engineering floated to No. 1 based on salaries that grads were typically able to earn and ease of landing a job.

The overall median income for those trained to build, design and maintain ships and marine vessels was $90,000, the data show. And less than 2 percent of degree holders were unemployed.

Nuclear engineering came in as second-most valuable followed by pharmaceutical sciences and administration, genetics and electrical engineering. These majors had unemployment rates ranging from 1.2 percent to 2.7 percent and median incomes of at least $85,000.

For comparison, the median income for all those with a bachelor’s degree was $55,000 and the unemployment rate was 2.8 percent, according to the data Bankrate analyzed.

Michael Sypniewski feels confident about entering the workforce after graduating with his doctorate in naval architecture and marine engineering earlier this month from the University of Michigan. The 28-year-old obtained his bachelor’s degree and master’s degree in the field from Michigan’s College of Engineering in 2014 and 2015.

“I was interested and enjoyed it. Those are the main reasons I’ve stuck with naval architecture and marine engineering,” he says. “However, if there weren’t any career opportunities or there weren’t good ones, I may have picked a different major.”

Sypniewski doesn’t have much to worry about. Employment of marine engineers and naval architects is projected to grow 12 percent from 2016 to 2026, according to the Bureau of Labor Statistics.

The field is growing faster than the average for all occupations largely because of the demand for environmentally friendly ships and systems to transport energy products, such as liquefied natural gas, across the globe, according to BLS’s Occupational Outlook Handbook.

STEM fields overall are expected to provide more opportunities and be more lucrative than average in the years ahead, government research shows.

The stage isn’t set quite as nicely for those with a degree in the arts. Art majors claim six of the bottom spots on Bankrate’s ranking.

Drama and theater arts, in particular, came in as the least valuable major largely because more than 5 percent of degree holders were unemployed and the median income for degree holders was $35,500.

Visual and performing arts was the second-least valuable degree just behind composition and rhetoric, linguistics and comparative language and literature and fine arts. These majors had unemployment rates above 3.5 percent and median incomes below $45,000.

People shouldn’t pick their college major solely based on income, unemployment rate and the amount of schooling required. Students and their families have to decide what’s best for them and consider going into industries with lower pay and higher unemployment rates might require additional work to be a competitive candidate and achieve certain financial milestones.

Despite the hype, STEM degrees won’t be for everyone, says Kerri Wakefield, director of the Engineering Advising Center at the University of Michigan.

“Some students feel an inordinate amount of pressure to get an engineering degree, for example, because they know they’ll likely have a nice salary on the other end,” Wakefield says. “Ultimately, we want students to land in a major that’s a good fit for their interests, strengths and goals.”

Students often work harder and are more fulfilled when they’re studying a topic that’s interesting to them, she says.

Kate Culligan, a career strategist and performance coach based in Denver, says the candidates with best opportunity at getting hired have done internships, have working experience and acquired skills.

“The more hands-on experience you get, the more employable you are regardless of what education you get,” she says. “Employers look at your skills.”

In general, research shows that earning a college degree still pays off in the long run even considering the rising costs. Students can take steps to make sure their investment in their education is worth it, says Greg McBride, CFA, Bankrate chief financial analyst.

“Consider community college for the first couple of years before transferring to a university for the final years of the program,” McBride says. “Look for scholarships, grants and work study programs — all of which could defray the out-of-pocket costs of a degree. And calibrate the cost of the school with your earning potential at the other end.”

Living expenses often get overlooked. But students, like the rest of us, could save money by shopping around for an apartment or taking on roommates rather than living alone.

Fifty-four percent of young adults who attended college incurred at least some debt from their education, according to research from the Federal Reserve. The typical amount of outstanding education debt was between $20,000 and $24,999 in 2018.

Repaying loans from banks and private lenders should be a priority to avoid unfavorable interest rates and fees. But grads who qualified for loans from the federal government might have more flexibility given the lower interest rates, income-based repayment plans and other options, McBride says.

“I’m going to say something that’s very unconventional: I don’t think there’s any rush to pay down your federal loans. Make the minimum payment and shove the extra money in your 401(k) instead,” he says. “Every dollar you put away in 20s could be $15 by the time you retire.”

To determine the most valuable majors, Bankrate looked at the most recent data available from the U.S. Census Bureau American Community Survey. The 2017 data was obtained through the IPUMS-USA, University of Minnesota research program. For the study, Bankrate used weighted data to analyze what bachelor’s degree holders who were either employed or unemployed entered as their first major and income for the past 12 months. We analyzed majors with labor forces of at least 15,000 people. We also looked at how many college graduates obtained a higher degree such as a master’s degree or doctoral degree. To construct our ranking, Bankrate examined three factors (weightings in parentheses): median income (70%), unemployment rate (20%) and the percentage of people with an advanced degree (10%). The final income data and labor force data was rounded to the nearest hundred.