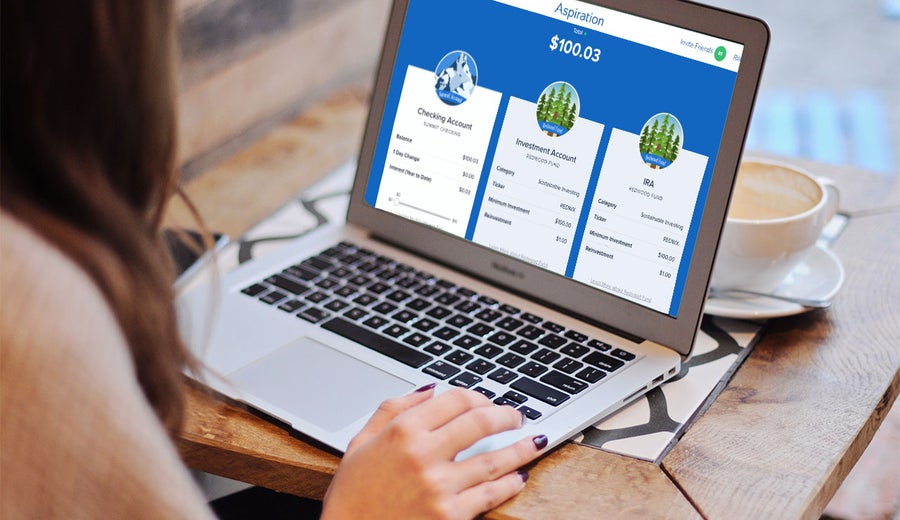 Every neobank has its own way of connecting with consumers. Aspiration has a particularly lofty goal: It wants to help you save the world.

The three-year-old firm, which offers a checking account and investment products, has carved out a niche in the fintech space with its “Do Well. Do Good.” motto. Besides tracking their finances, customers are given insights into how the businesses where they regularly spend money treat employees and approach sustainability.

Criticizing the likes of Wells Fargo or Bank of America for their high fees and scandals is a time-honored tradition in fintech, but it seems to be a key part of Aspiration’s ethos.

CEO Andrei Cherny, a former aide and speechwriter for President Bill Clinton, is often relentless in his criticism of large banks.

“Frankly, the only thing big banks have going for them is customer inertia,” he said.

At the root of Cherny’s criticism is the approach to fees taken by big banks. It is a foregone conclusion in banking that checking accounts are loss leaders, so banks bake in fees where they can: overdrafts, monthly service fees and ATM charges, to name a few.

“There is no reason that banks can’t offer free checking,” he says.

Earlier this year, when Bank of America caught flack for ending its eChecking program, Aspiration seized on the opportunity to attract customers, even creating a page on its website that touts that it has recruited more than 26,000 former Bank of America customers.

Pay what you wish

Most neobanks make money on interchange fees — the charges that retailers pay banks when you buy something. Aspiration makes money that way, too, but it also has a pay-what-you-want model.

“We tell our customers to pay what is fair, even if that means zero,” Cherny says. “If they’re really happy, they’ll pay us.”

Cherny declined to give specifics, but says most people pay something. Aspiration caps fees at $10 a month. Also, it donates 10 percent of its customers’ fees to charities across the U.S.

It also covers the ATM fees levied by any other bank around the world. Aspiration itself is not a bank, but it partners with Radius Bank in Boston to insure customers’ deposits with the FDIC up to $250,000 per account.

Additionally, the firm offers sustainable and low-volatility investing and retirement accounts. Those products also have a pay-what-you-want model, but charge embedded expenses that the firm caps at 0.50 percent of the assets held in the account.

Aspiration thinks you should pay attention to the companies and services you use. Things like how well the grocery store pays its employees or the amount of carbon dioxide emissions an ecommerce site generates when shipping goods to your door.

Many users are genuinely interested in these issues, but getting accurate and granular data on one’s personal impact is very difficult. Aspiration tries to make it easy by scoring your purchases. Transactions are given scores — based on a 1 to 100 scale, where 100 is the best — about people and the planet. The “people score” takes into account things like employee pay, access to healthcare and workforce diversity. The “planet score” looks at greenhouse gas emissions, energy efficiency and renewable energy use.

In addition to each transaction being scored, you’re given an overall score and can compare how you did month to month. And the app also tells you how comparable retailers rank.

The company pulls data from a range of sources to arrive at its scores. Cherny says it examines more than 75,000 data points in determining the scores.

Even with that kind of depth, there are smaller retailers that won’t necessarily have a score. But they can get one by signing up to add their data to the matrix.

In other words, you could talk you local corner store into signing up, that one where you always buy organic green tea ice cream.