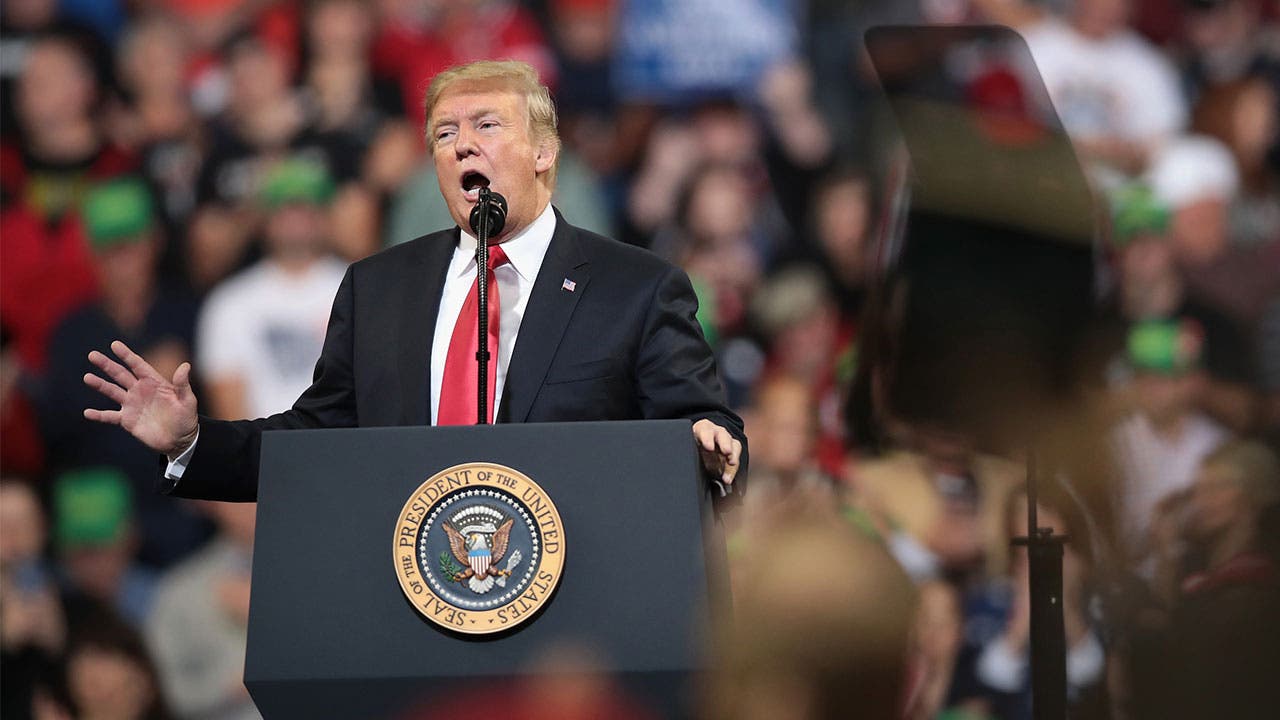 A majority of Americans say their finances haven’t improved since the 2016 general election, when Republicans added the White House to their control in addition to both chambers of Congress, according to the Bankrate 2018 midterm election survey.

Among respondents, 38 percent said that their personal financial situations improved during the past two years with President Donald Trump and the GOP leading the country. But they were collectively outnumbered by the 17 percent who said they were worse off and 45 percent who reported their finances are about the same now compared with two years ago, according to the survey released Wednesday. 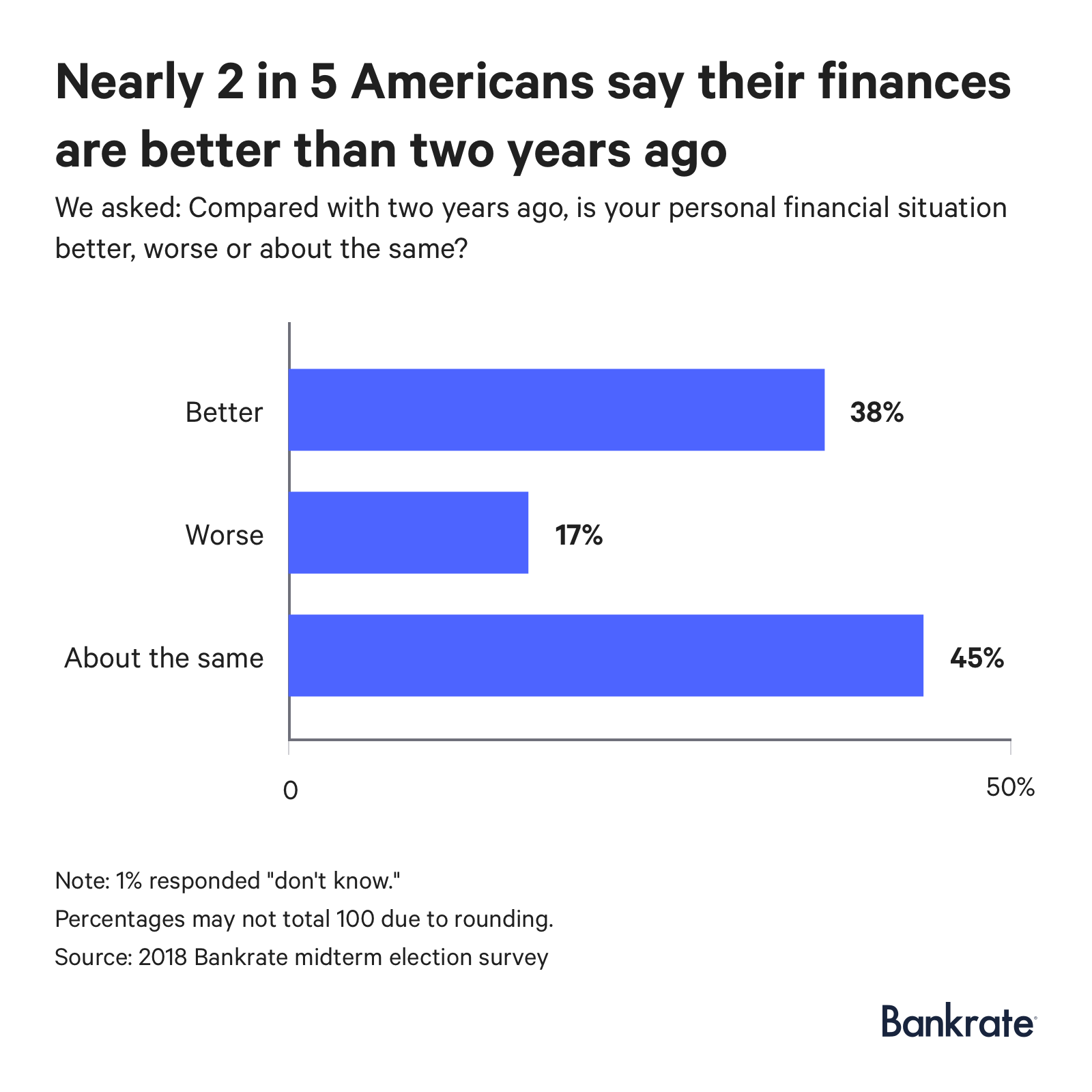 Many people are benefiting from lower unemployment, stock market gains and the gradual uptick in wages, experts say. Americans who are white, higher-income earners and Republicans were more likely than their peers to say they were better off financially heading into the Nov. 6 midterm elections, the survey finds.

The Bankrate 2018 midterm election survey was conducted for Bankrate via telephone by SSRS on its Omnibus survey platform. Interviews were conducted from Sept. 25-30 among a sample of 1,001 respondents.

It’s a fact that the U.S. economy has continued to improve since Trump was elected just two years ago, says Mark Hamrick, senior economic analyst at Bankrate.

“Ultimately, a rising economic tide lifts many boats. It does not lift all of them,” Hamrick says. “The economy is paying dividends for many Americans, but there are still many people and pockets of the U.S. economy that are hoping for those dividends to appear.”

Most Americans are at an economic standstill

Most respondents of Bankrate’s survey (45 percent) said their financial situations were about the same in 2018 as they were in 2016.

“Wages are taking a slight uptick, but people in general are not seeing huge bumps in their salaries or wages that would make them say, ‘Oh wow, things are really getting good,” says Margaret Simms, an economist and non-resident fellow at the Urban Institute.

“People may feel more secure and not worried about losing ground, but they feel they have not gained a lot of ground,” Simms says.

Average weekly earnings rose by $53 (6 percent) from September 2016, reaching $940 in September, according data from the U.S. Bureau of Labor Statistics.

A rising economic tide lifts many boats. It does not lift all of them.


Traci Tapani’s confidence in the economy is tempered with concerns about labor shortages and shifting national trade policies. Tapani and her sister run Wyoming Machine Inc., a small manufacturing company based in Stacy, Minnesota. Tapani is in a position where she can send two children to private college without them taking out student loan debt. But she attributes that more to good saving habits than anything Congress or the White House have done.

“I feel good right now. I’m not in doom and gloom stage. But I’m also not celebrating in the street because everything is going so wonderfully,” Tapani says. “The tariff situation that’s been going on affects the raw materials we use in our business, so that is a problem internally because there is so much repricing going on that we normally wouldn’t be doing.”

Economists are watching for a major fallout from the tariffs on Chinese imports, Canadian lumber and other foreign products. Spending more for goods may cut into or wipe out the pay gains some families have recently seen.

“I’m worried about being emotional about trade issues, workforce, welfare, public assistance programs …,” Tapani says. “We need to take a thoughtful approach and not get emotional and just start reacting to stuff without sound economic data to back that up.”

People have very different economic outlooks depending on which side of the political aisle they fall.

More than 7 in 10 Democrats said their personal financial situation was either the same (48 percent) or worse (23 percent) compared with two years ago. Meanwhile, 40 percent of their Republican neighbors felt similarly stagnant (31 percent) or worse off (9 percent). 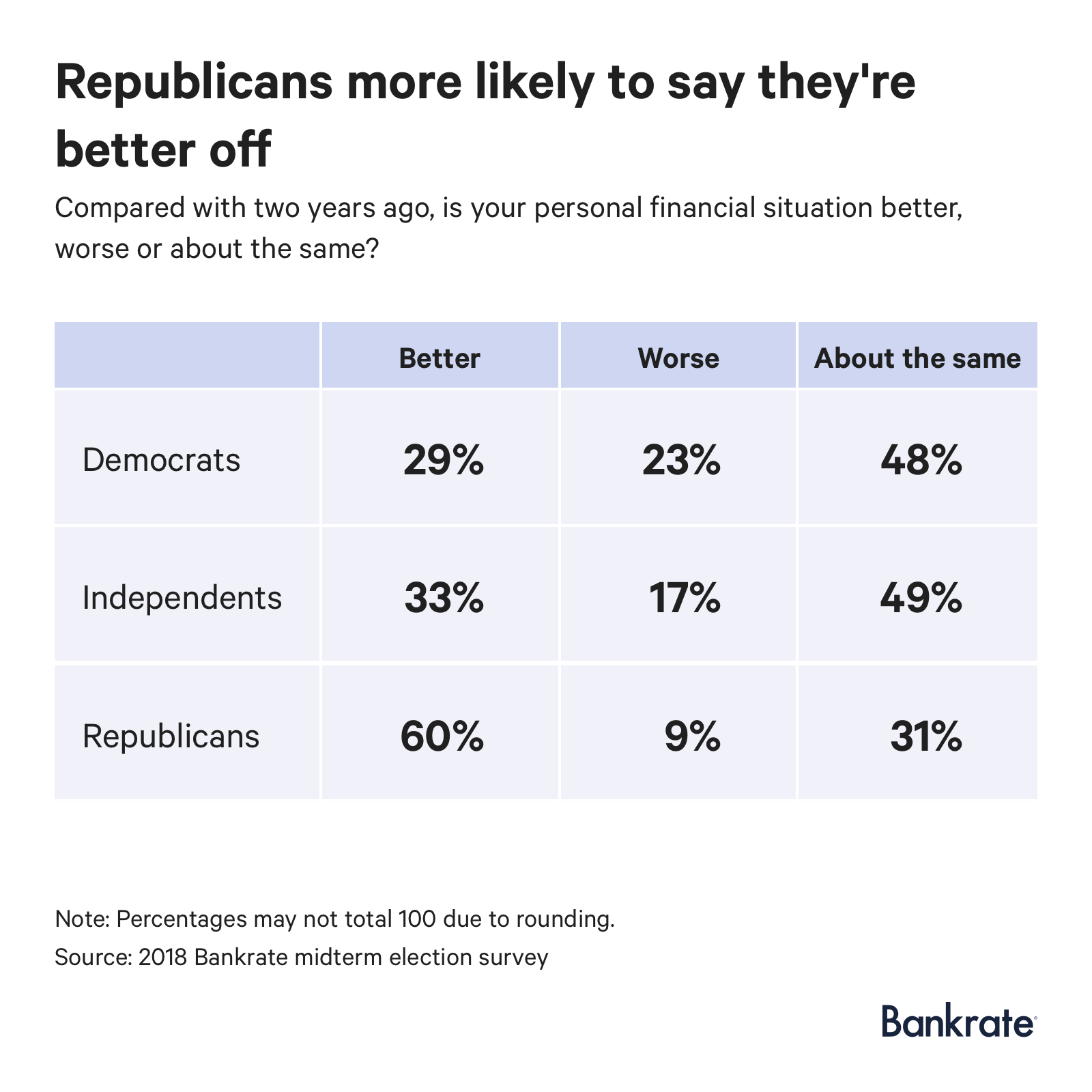 “We have a weird tribalism going on,” says Diane Swonk, chief economist of Grant Thornton. “We saw the polarization pick up in the 2000 election, and it’s just accelerated.”

Democrats whose financial situation declined since 2016 were more likely to blame Trump (17 percent), Republicans in Congress (5 percent) or both (39 percent). A third of Republicans similarly held the White House and/or GOP lawmakers responsible for their worsening financial health — a 28-point divide. 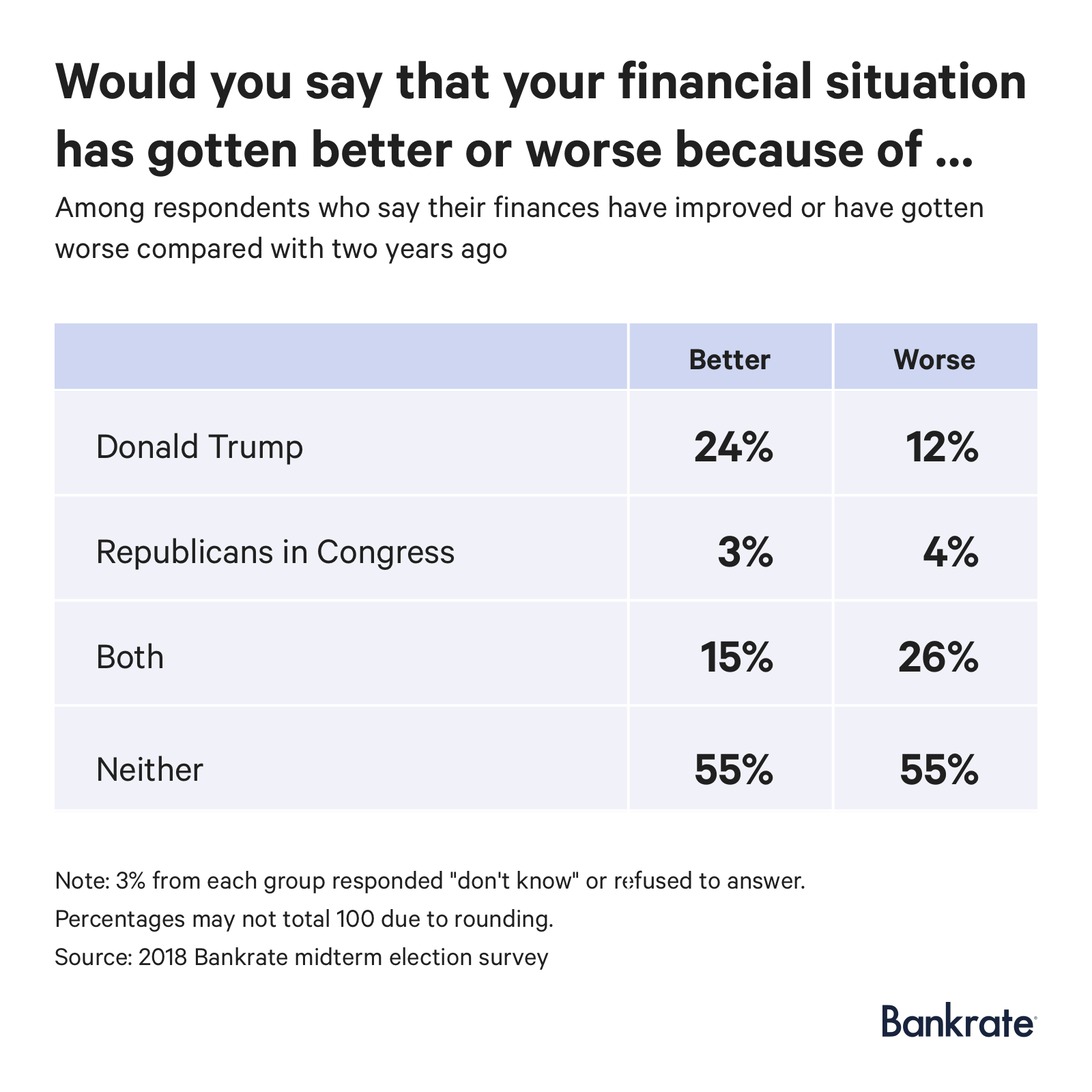 Democrats who said things got better for them since 2016 refused to give credit to Republicans — only 7 percent reported that their financial situation has gotten better because of Trump, Republicans in Congress or both.

Among Republicans, 71 percent who saw financial improvements attributed that to Trump (39 percent), Republicans in Congress (5 percent) or both (27 percent), the survey finds.

Republicans, particularly the White House, claim the economy now is better than at any time in the history of our country.

“At the end of the day, people know what they have in their pocket, they know how they’re doing, and you can’t fool them,” Swonk says. “You can’t say the economy is better than it is. You can’t just say it’s worse than it is to them. It just is, and right now it’s better for most of them. Even if it’s not where they want to be, it’s better than it was.”

People who own homes increasing in value, employees in high-demand positions and stock holders are likely to have benefited financially during the past two years, says Lynn Reaser, chief economist at Point Loma Nazarene University in San Diego.

But renters whose incomes are not keeping up with rising housing costs, low-skill workers, heavy borrowers and ill-prepared retirees are less likely to experience the economic boon, Reaser says.

There was a 33 point-gap between those on the lowest and highest rings of the pay ladder in Bankrate’s survey. More than half (54 percent) of Americans who earn upward of $75,000 said things were better now versus in 2016, but just slightly over a fifth (21 percent) of those earning less than $30,000 agreed, the data show.

“If the economy continues to improve, more people should see an improvement in their financial positions, particularly employees receiving larger raises,” Reaser says. “There will still be a number left behind.” 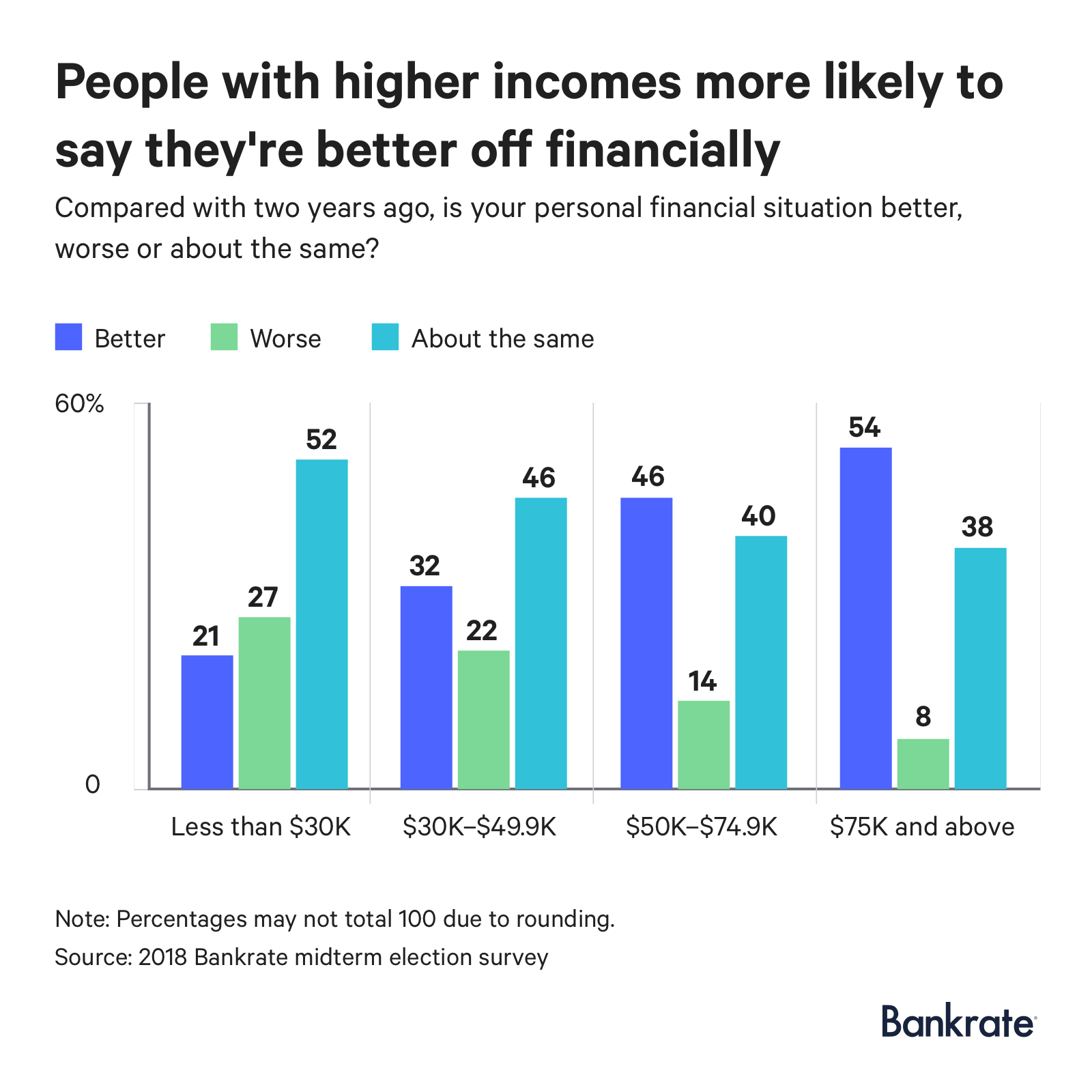 Amanda Lee recently experienced how difficult moving forward could be with less pay to work with. In 2015, the Huntsville, Alabama, resident left a legal practice where she was working to find a better fit for her personality and skills.

Lee struggled to find a new job. After six months of looking, she ended up in retail.

“I see a rigidity in the way people think about occupations that I don’t recall having seen in my younger years,” the 32-year-old says. “This may have to do with the fact that the Great Recession made employers extremely picky, an attitude that I am seeing to this day.”

“I have mixed feelings going forward. I think that my spouse and I will be fine, because we’re approaching our 40s, in good health and have a wealth of job experience between us,” Lee says. “I am still quite concerned about the market for other people, especially the very young millennial and Gen Z kids just entering the market and the elderly.”

How to improve your financial situation

Without a crystal ball, it’s impossible to say whether Republicans will be able to maintain their hold on Congress or whether Democrats will be able to steal away the U.S. House of Representatives or Senate.

Although the stock market might seesaw in the days leading up to and following the midterm elections, advisers encourage investors to avoid overreacting.

“While we can imagine a variety of scenarios that could exacerbate further volatility or even downward trends with stocks in the intermediate term,” Hamrick says. “The reality is that it would be a mistake for most people to reduce their exposure to stocks.”

The Federal Reserve operates semi-independently and will likely stick with its plan to raise rates regardless of who wins in November, Simms says.

The Fed approved its third rate hike of 2018 in September. Many economists expect the Fed to bump up the federal funds rate one more time this year. That will lead to higher interest rates for mortgages, credit cards and other borrowing tools. They also tend to boost how much interest consumers can get from savings accounts and certificates of deposit.

“Almost every time is a good time to save more if you’re in a position to do so,” Simms says, “because saving in one form another will give you more flexibility and more cushion should there be a general economic downturn or whether your family might suffer some economic reversals due to a lack of employment or a catastrophic illness.”

This study was conducted for Bankrate via telephone by SSRS on its Omnibus survey platform. Interviews were conducted from Sept. 25-30, 2018, among a sample of 1,001 respondents. The margin of error for total respondents is +/-3.72 percent at the 95 percent confidence level.