So, you’ve found a home you love and are ready to make an offer. The catch? It’s in a flood zone, so the likelihood you’ll face a flood event is higher than usual.

Before buying a house in a flood zone, it’s important to know the risks and costs involved. With flood insurance in place, of course, you may feel more comfortable with the purchase, and there’s also a chance you can negotiate a lower price.

What is a flood zone?

A flood zone is a geographic area that the Federal Emergency Management Agency (FEMA) has defined according to flood risk. FEMA has designated several flood zones, including moderate- to low-risk areas, high-risk areas and undetermined risk areas. These designations also fall into two categories:

What to know when buying a house in a flood zone

If you are considering buying a home in a flood zone, it’s important to understand what exactly that means. There are several different types of flood zones, with the most common being Zone A or Zone V. A Zone A flood zone is in a low-lying area and is close to a body of water like a lake. Zone V homes are in coastal regions and may be exposed to flash floods, hurricanes, and other weather that can lead to exposure to water and weather-related hazards.

The highest risk areas are often referred to as Zone AE. These zones are defined by FEMA as having a 1 percent chance annually of experiencing flooding, and a 26 percent chance over the course of a 30-year mortgage.

Buying a home in a low or moderate-risk area instead of a high-risk area does not guarantee that you’ll be free of flooding. It’s simply a matter of probability, and changing conditions can lead to regions becoming more susceptible to flooding over time. But if you’re in a higher-risk area, you’ll likely expect to pay more for flood insurance.

It’s not difficult to find out if your prospective property is located in a flood zone. You can simply ask your real estate agent if the home you’re interested in buying is within a designated flood zone, which zone it is and what that designation means. You can also visit FEMA’s Flood Map Service Center and search using the property’s address.

It’s a good idea to seek out this information early in the homebuying process, well before you make an offer on a home.

Advantages of buying in a flood zone

One possible benefit to buying a home in a higher-risk flood zone versus a lower-risk zone is that you may pay less for the property. “A home in an SFHA may be priced lower than a similar house nearby that is not located in an SFHA, but this is not always the case,” says John Dickson, CEO and president of Aon Edge, a private flood insurance provider based in Kalispell, Montana.

Another benefit is that the area or neighborhood may be your dream location. Many people buy homes in a flood zone because they want to live in a waterfront or beachfront community, and many of these are in low-lying coastal areas designated as FEMA flood zones.

“The homebuyer must then weigh the risk of purchasing a waterfront property in a flood zone versus buying a home in an area that does not offer the same lifestyle,” says Suzanne Hollander, an attorney and real estate professor at Florida International University in Miami.

Risks of buying in a flood zone

Along with the potential benefits, there are disadvantages to purchasing a home in a higher-risk flood zone. First, flood insurance, especially if it’s required, can be expensive. The average annual cost for an NFIP policy is $771, but the premium you pay can vary depending on your location.

Also, flood insurance may not cover 100 percent of your costs to remediate flood damage or rebuild your home. Typically, “the maximum amount of coverage available through the NFIP for a residential home is $250,000,” says Drew Scott, vice president of Personal Lines at Stratford, Connecticut-based Scott Insurance.

Even if you have ample insurance coverage, a flooding event can be extremely disruptive and stressful. “If the damage is severe, you have to move out to have your home fixed,” Hollander notes, adding that “if you buy a property in a flood zone with the intent to build a home, or if you have to completely rebuild your home after a flood, the costs to build in the flood zone may be higher than in a non-flood zone.”

Additionally, in higher-risk zones, “properties for sale may lack a basement or underground parking — two amenities often coveted by homebuyers,” Hollander says. There is also the potential of needing to evacuate the home quickly if a major disaster is imminent. “Owners and occupants may not be able to return until local laws allow, which could be weeks or more,” Hollander says.

Following a flood, expect the claims process to be more complicated and take longer than other types of insurance claims, as well. Being located in a higher-risk flood zone can also impact your home’s resale value, even if your home never suffered flood damage, and it may also take longer to find a buyer when you want to sell.

Homeowners with a Fannie Mae, Freddie Mac, FHA, USDA or VA loan are all required to have flood insurance coverage if their property is in an A- or V-designated flood zone. If you’re applying for a conventional mortgage offered by a private lender (in other words, a non-government loan), or if the home you’re eyeing is in a non-SFHA zone, your lender likely won’t require flood insurance, but it may still be recommended.

Assuming you obtain flood insurance regardless of whether your home is in a high- or low-risk zone, you should be able to apply for and secure any conventional mortgage or government-backed loan if you qualify. The National Flood Insurance Program (NFIP), administered by FEMA, provides most residential flood coverage in the U.S., although NFIP coverage is not available everywhere. In these places, borrowers may be able to purchase flood insurance from a private insurer.

What to look for when you buy

In addition to finding out if the home you’re interested in is within a FEMA-designated flood zone, it’s wise to have a thorough inspection conducted. This can reveal any hidden red flags, including signs of existing or previous flood damage.

“Some states have requirements around homeowner’s disclosures on a property being sold. These disclosures can include whether the home has suffered flood damage,” Dickson says. “But — especially if the seller isn’t required to disclose this information — it’s best to pay for a professional inspection. This expert can also detect damage from non-catastrophic events, such as lack of proper drainage around the home.”

Is it worth buying a house in a flood zone?

It can be, but it depends on a few factors. As a homeowner in a flood zone, you must be aware of and understand the risks, and also have the means to afford both flood insurance and a mortgage (if getting one).

You must also be willing and prepared to take flooding precautions if necessary, and determine that the home for sale is priced right based on its location in a flood zone. A real estate agent can help.

“Taking the time to do the proper research before purchasing is key to making a well-informed decision,” says Bryce Linden, an attorney with Cook and James, LLC in Atlanta. “Never assume that your homeowners insurance policy will cover flood damage. You need to have the right flood insurance protection in place, especially if your home is at greater risk of flooding.”

Patricia Templeton-Jones, president and chief program advocate for St. Petersburg, Florida-headquartered Wright National Flood Insurance Company, says buying a home in a non-SFHA flood zone can be worth it, too, provided you have flood coverage intact, even if it’s not required.

“Everyone should have flood coverage,” says Templeton-Jones. “Only flood insurance, not homeowners or renters insurance policies, covers losses to homes and their contents directly caused by flooding. Remember: Mother Nature does not stick to the lines on a flood map, and ‘low risk’ doesn’t mean ‘no risk.’” 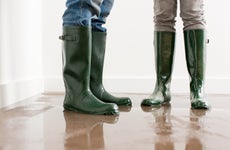 How to buy flood insurance coverage 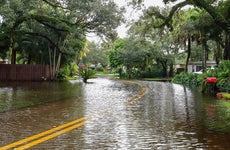 Guide to flood insurance: Here’s what to know 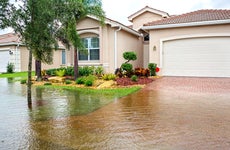 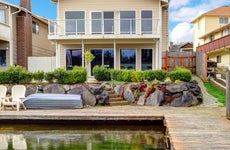 How much flood insurance do I need for a mortgage?