The electric vehicle (EV) market experienced explosive growth in 2021, and that growth is projected to continue into 2022. In January, Tesla reported $5.5 billion in 2021 profits, more than six times higher than its 2020 earnings. And while demand for EVs continues to grow, auto manufacturers like Tesla worry that ongoing shortages and supply chain issues could limit production.

Is 2022 the time to dip your toe into the EV market? If you’re hoping to snap up an electric car in 2022, you’ll have more options than just the popular Tesla Models 3 and Y. Car manufacturers from Toyota to General Motors are nipping at Elon Musk’s heels with their own EV models, with Ford rolling out an electric F-150 to be released in the spring of 2022. And BMW, Nissan, Toyota and GM have already bought up ad space during Super Bowl LVI to market their new vehicles.

If you’re considering purchasing an electric vehicle — whether to reduce emissions or save on gas — the following factors may affect your choice.

As the EV sector progresses, EV trends seem to center around hands-free technology and AI. As electric cars progress in 2022, we may see self-driving capabilities become more common as consumers gain trust in automatic piloting technology. Tesla rolled out its first version of Autopilot software all the way back in 2015, but other manufacturers are just beginning to release their own versions. Volvo recently announced its own autonomous vehicle technology, Ride Pilot, which will allow drivers to travel on highways without supervising the vehicle, which means you’ll be able to eat or watch a movie while driving.

While battery-powered electric vehicles are the most popular type right now, German automakers, including Audi and BMW, are developing hydrogen fuel-cell vehicles alongside battery cars. These vehicles convert hydrogen into electricity inside the vehicle without releasing harmful emissions into the atmosphere. Hydrogen fuel cells have a greater energy storage capacity than lithium-ion batteries, so they may become more common in 2022. However, critics contend that the battery electric vehicle market is more viable than hydrogen vehicles could be. Elon Musk, “Technoking of Tesla,” commented that, “It’s just very difficult…to make hydrogen and store it and use it in a car.”

Most anticipated EVs for 2022

While Tesla leads the electric car industry in sales, several other automakers are drumming up interest for their 2022 releases. Buyers expectantly await the following vehicle releases this year:

Average cost of an electric vehicle

In addition, the sticker price of EVs is getting lower thanks to federal tax credits that can knock as much as $7,500 off the price of your vehicle. Additionally, EVs are expected to get even cheaper in the coming years thanks to battery and technology improvements.

The average cost of car insurance across all vehicle types in the U.S. is $1,674 for full coverage. Meanwhile, the cost of car insurance for electric vehicles varies. High-end EVs cost more to insure. For instance, full coverage for a Tesla Model S costs $3,802 on average, while full coverage for a Fiat 500c costs $1,463 on average. However, rates will vary based on your individual characteristics, the make and model of your vehicle and what company you choose. You may want to look into companies that cater specifically to EV insurance.

Owning and driving an electric car

Are you considering purchasing an EV this year? Here are some facts about electric vehicles  that you may want to consider before buying.

Benefits of owning an EV

EVs come with certain benefits that you won’t find with an internal combustion engine (ICE) vehicle.

Pros of driving an electric car over regular car

Many of the vehicles in the EV industry today come with state-of-the-art features including:

Three types of charging stations are available for EVs in the U.S.: Level 1, Level 2 and Level 3. A Level 1 charger provides 5 miles per hour of charge and may work well for hybrids such as the Kia Niro. A Level 2 charger works well with battery EVs such as the Tesla Model 3 and provides between 13 and 25 miles per hour of charge. Level 3 chargers work well with most battery EVs and only need about 10 to 30 minutes to reach a full charge.

Affordability of owning your own station 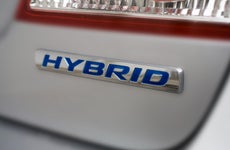 Hybrid vs. electric: How to choose 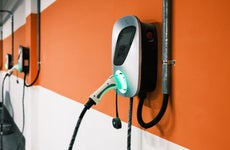 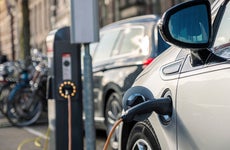 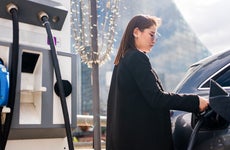 Is now a good time to buy electric? Considerations when financing an EV