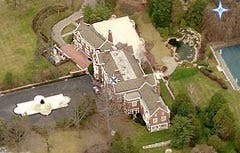 While the housing industry is buzzing about further impediments to a recovery caused by the recent foreclosure suspensions, two high-profile mansions sold for a song last week.

Luxist reported that the Indianapolis mansion formerly owned by Stephen Hilbert, former CEO of Conseco, once valued at $25 million, sold for a mere $3 million. The buyer is Forrest Lucas, founder and president of Lucas Oil. Lucas says he’ll use the home mainly as a corporate retreat, possibly around the time of the 2012 Super Bowl, which is slated to be played at his namesake stadium in Indianapolis. (Incidentally, he compared the price of the mansion to the cost of a 30-second TV ad during the Super Bowl.)

And remember the “Queen of Mean,” the late hotelier Leona Helmsley, of income tax-dodging fame? The one who bequeathed $12 million to her dog? Dunnellen Hall, the 28-room Greenwich, Conn., summer home she shared with husband Harry sold for $35 million — $90 million less than the 2008 asking price. The owner is undisclosed, but one thing is evident in both these fire sales: Those who didn’t over-leverage themselves and who have available cash are snapping up the indulgences of the credit-bingers.

What do you think of these major price reductions? Is the housing market getting back to normal after being over-inflated for a decade, or are these price discounts a sign of long-term distress?

Sign up for our newsletter on CD & Investing News.