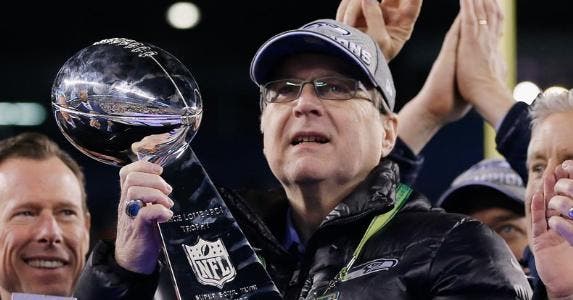 How Paul Allen’s net worth was built

Paul Allen began programming computers at Lakeside School in Seattle with Bill Gates in 1968. Later, shortly after dropping out of Washington State University, Allen and Gates started Microsoft. Allen left the tech behemoth in 1983 after he was diagnosed with Hodgkin lymphoma, a disease he eventually beat.

You can use Bankrate’s net worth calculator to see how you compare to Allen’s net worth.

In 2003, Allen created the Allen Institute for Brain Science, which works to shed light on neurological function and brain-related disorders and diseases. The following year, Allen’s SpaceShipOne became the first privately funded effort to put a civilian into space. Stratolaunch Systems, a subsidiary of Vulcan Inc., is planning to launch satellites into low-earth orbit from the world’s largest airplane.

Allen also has an award-winning film company called Vulcan Productions. He also plays guitar in a band called Paul Allen and the Underthinkers.

Allen pledged the majority of his estate to the Giving Pledge. In addition, the Paul G. Allen Family Foundation supports the arts, social change, youth engagement, community development, and science and technological innovations.

Allen’s film company has won an Emmy and a Peabody Award, and SpaceShipOne received an Ansari X Prize in 2004. Allen received the Ischia Humanitarian Award in 2015 for his contributions to such social issues as climate change and combating elephant poaching.