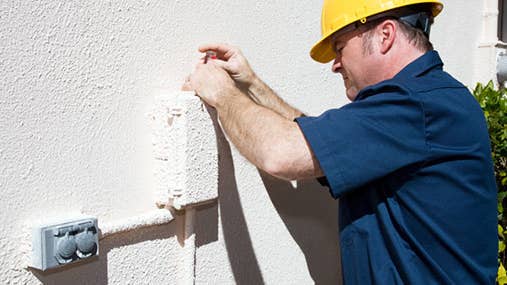 From a 15-foot boa constrictor holed up in the dark to a house ready to collapse in a stiff breeze to electrical wiring that bursts into flames at the flip of a switch, home inspectors have seen it all. And those horror stories could be yours if you don’t have a home inspected before you buy.

“Getting a home inspection is the best money a buyer spends, even if they end up not buying the home,” says Dominic Cardone, a regional vice president for the National Association of Realtors.

While some buyers might balk because of the extra cost, spending a few hundred dollars to get a home inspected could save you thousands in the long run.

Marvin Goldstein, former president of the American Society of Home Inspectors, or ASHI, recalls one new home he inspected in the Philadelphia area that had passed a city inspection, even though it had no toilets and was plagued by “incomplete, improperly done work. There was $75,000 worth of work needed” — not exactly pocket change for a buyer.

Protecting the buyer by inspecting

In most home-purchase offers, it’s customary to include a clause making the transaction contingent on the findings of a home inspection.

If the inspection reveals real problems, what happens next depends on the contract. “It’s done differently in different contracts across the country,” Cardone says. The seller may cover repair costs; the buyer and seller might split costs; the seller might credit the buyer money to make repairs; or the seller might reduce the price. If they can’t come to terms, the buyer can walk away from the agreement.

As home inspectors will point out, what you don’t know can hurt you.

Blaine Illingworth, an ASHI director in the Philadelphia area, has had more than his share of animal encounters while doing inspections. In the crawl space of one Pennsylvania house, “I came face to face with a 15-foot boa constrictor. It’s amazing how fast you can crawl backward!”

The behemoth had gotten loose a couple of years earlier, and the owner thought it was dead, not residing under his house.

Another time, Illingworth says he saved a family from carbon monoxide poisoning. The sellers thought they had the flu. Instead, he found a raccoon sleeping in the chimney, blocking the flue. The problem wasn’t the flu — it was the flue.

In another case, while inspecting an old farmhouse, Illingworth discovered a colossal hornets’ nest, with seemingly hundreds of thousands of the stinging creatures, covering one attic wall.

Termites also can cause a pile of damage. Claude McGavic, executive director at the National Association of Home Inspectors, or NAHI, recalls inspecting a 1920s Florida home. “From outward appearances, it looked fine.” A closer look showed termites had devoured the wooden framing, leaving it held together by the plaster on the walls. “I could have pushed it over,” McGavic says.

Crispy, but not well-done

Homeowners can be their own worst enemies. In one case, McGavic says he went to inspect a house with a real estate agent. The agent flipped a light switch, setting the house on fire. The pair put out the fire, cleared out the smoke — and the buyer bought the home.

Illingworth recalls inspecting a home owned by an electrical engineer, who proudly announced that he had wired the house himself. Unfortunately, he had used the wrong type of wiring. “Everything was brown or black and crispy. I can’t understand for the life of me why it hadn’t burned down yet.”

Water heaters also can be dangerous things, as Bill Jacques, ASHI’s president, found when inspecting a home in the Charleston, S.C., area. Water heaters have a pressure-relief valve attached to a drain line channeled outside. If it overheats, the valve opens, draining water so the tank doesn’t explode. In this case, the homeowner had substituted a turkey baster for a drain line. “It would have blown the turkey baster away,” spewing hot water, Jacques says.

What to expect when they’re inspecting

A typical inspection takes several hours and looks at things such as the heating and air-conditioning systems, plumbing, electrical system, and roof. Specialty inspectors can check for mold, radon gas and energy efficiency, McGavic says.

Older homes are more likely to have problems as things wear out, but new homes aren’t immune, as Goldstein discovered when he inspected that new home with no toilets and $75,000 worth of problems.

If repairs are needed, hire a licensed contractor. That way, there’s a paper trail that the work has been done. And Jacques recommends having the home reinspected to make sure the repairs were done properly.

In many parts of the country, a home inspection will cost a few hundred dollars, and the price is influenced by the age of the home, its square footage, and how far the inspector needs to travel, Jacques says.