5 cool and unusual homes on the market

These houses are way cool

Not everyone wants a traditional house in the suburbs.

“We’re seeing a trend of people wanting to go outside the box,” says Leslie Piper, housing specialist for Realtor.com. “Wanting to put their stamp — and spend their money — on something that has meaning to them.”

And the appetite for standout homes is growing.

Search for the lowest mortgage rates

It’s still “a niche market, but more than before we’re seeing the demand rising,” she says. “It’s a hot market for something unique.”

If you’re craving a home that stands out from the rest, you’re in luck.

How about a vintage firehouse in the French Quarter, or a houseboat in the Keys with a little history? Or maybe you’d prefer something that offers a different perspective on life — like a modern treehouse or a century-old clock tower with views of the Big Apple? And, if you dream of the Old West, how about a Pueblo Revival homestead in historic Santa Fe, New Mexico?

Here is a sneak peek at five homes that likely fit your craving for the unusual. 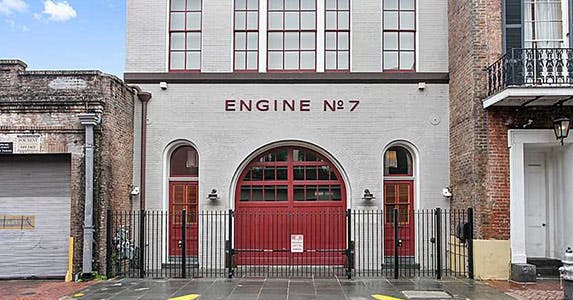 Originally the home of Engine Co. No. 7, this former firehouse has become a town house in New Orleans’ French Quarter.

“It was done with the finest of the finest,” she says. “It’s overwhelming.”

It has polished concrete floors, reclaimed heart-of-pine accents, frosted glass walls, clerestory windows and recessed lighting throughout the lower level — along with oversize stable doors from the original firehouse.

The 5,698-square-foot home can be sold as one town house, or the two levels can be sold individually as condominiums, Oudt says.

The owner had “walked by the firehouse for years and always admired it,” says Oudt. When he saw the “for sale” sign on it, she says, “he decided it was an extraordinary space, and he wanted to do this.” 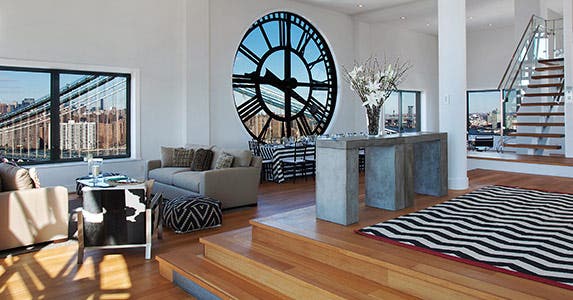 What would be the perfect home for someone who always wants to know what time it is?

Situated on the 16th, 17th and 18th floors, with picture windows and glass clock faces on all four sides, the tower penthouse gives 360-degree views of New York, he says.

The lower level has one open area with living and dining spaces and sleek kitchen, amid 14-foot glass clocks, 16-foot ceilings, skylights, a wraparound staircase and white oak floors — centered on a soaring 50-foot cupola.

The penthouse has three bedrooms and 3 1/2 baths, and the master bath has a freestanding pedestal tub, heated stone floors and a view of the Statue of Liberty, he says.

The third level is another open space that could be used as an office or gym, Castelluccio says. A glass elevator serves all three levels. A rooftop retreat is set up as a Zen meditation spot, he says.

An added bonus: The clocks are now controlled electronically — and the new owner gets to set the time, says Castelluccio. 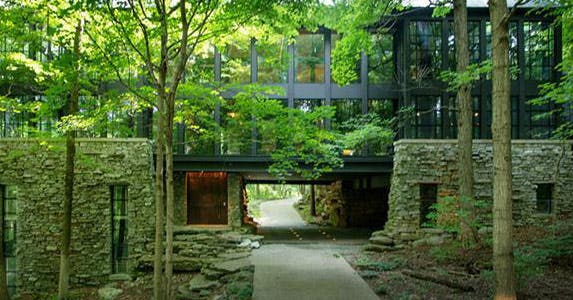 Ever have the urge to escape to your own treehouse?

Welcome to the grown-up version — complete with modern design, walls of glass and raised outdoor walkways.

“The architect designed it as if they had dropped the house into the trees,” she says. “It’s like living in a park.”

The main living area features two-story ceilings, with walls of windows and a fireplace with stacked-stone hearth. The warm, plank floors are “reclaimed wood from old warehouses,” Chilton says. And the stonework throughout the home “gives it a rustic, organic feel,” she says.

It has its own elevator. The master suite, which occupies a full floor, includes a bedroom with sitting area and built-in bookcases, an office, a gym and his-and-hers bathrooms with a sauna and a hot tub, she says.

The 7,165-square-foot home also has two guest suites and a black and white kitchen “designed for entertaining and catering,” says Chilton. 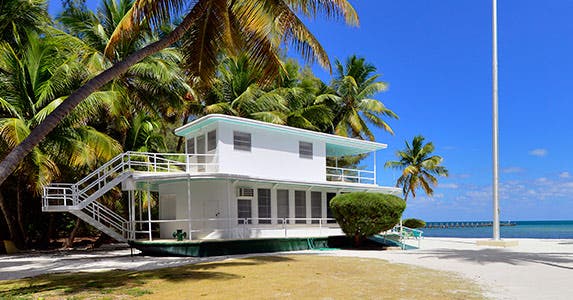 This beach house started out as a boat.

But after the 60-foot, 1948 Chris Craft got beached during a storm, the owners converted it into a sleek home nestled on almost 5 1/4 beachfront acres, says Cheri Tindall, broker associate with Ocean Sotheby’s International Realty.

With a glass front opening to the balcony, plus oversized windows on two sides, the all-white, nautical-themed living area has panoramic views of the ocean.

The home has white tile floors and built-in shelves and cabinets. The white galley kitchen works well for fixing light meals or entertaining, she says.

Originally built with one stateroom, the yacht’s wheelhouse has been converted to a second stateroom, with its own private balcony, Tindall says.

The houseboat also has an outdoor beach shower and a separate storage shed for equipment, she says.

The 959-square-foot home sits on 300 feet of palm-shaded beachfront on Islamorada in the Florida Keys, Tindall says.

And, if local rumors are correct, the original yacht was custom-built for hotel baron Conrad Hilton, and the beach house has hosted two U.S. presidents. 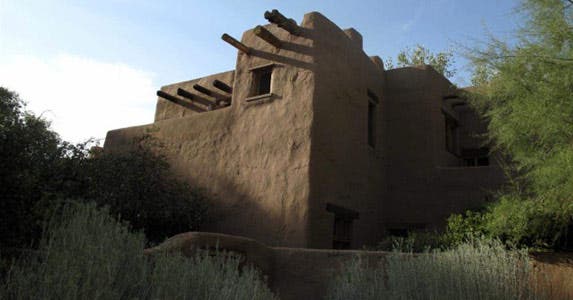 This adobe homestead could be the setting of a classic Western.

The Pueblo Revival compound — a main house along with a guesthouse, casita, caretaker’s house, studio, library and chapel — sits on 1 1/2 acres enclosed by an adobe wall, on Santa Fe’s historic East Side, he says.

The compound has nine bedrooms, including six in the main house, Duran says. The adobe walls of the home and outbuildings are over a foot thick, which keeps the interiors cool in the summer and retains heat during the winter, he says.

Most of the compound’s structures were commissioned — using traditional methods, materials, and craftsmen — by the Fields family in the late 1920s and early ’30s, Duran says. But parts of the property are believed to date to the 1880s, according to records from the Historic Santa Fe Foundation.