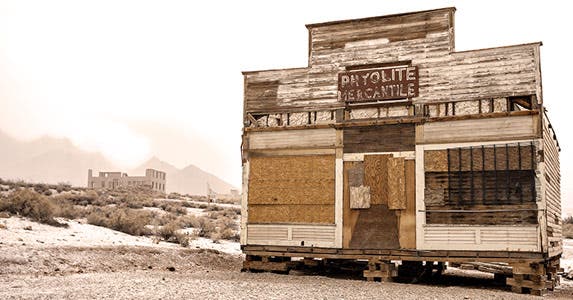 See what’s left of these ghost towns that are scattered across the country — from abandoned mining camps to a deserted state capital, a ghostly resort town and an amusement park. 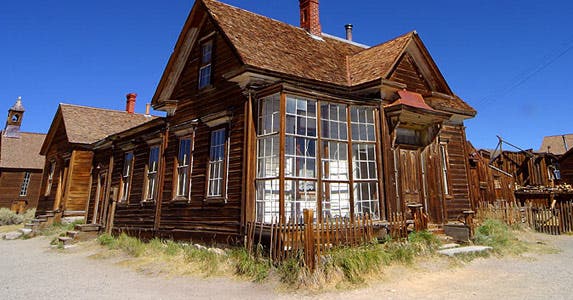 Born: The story goes that W.S. Bodey discovered gold in these high desert hills in 1859. The settlement was an isolated mining camp until 1876 when a profitable vein of ore was found, and the town boomed. In the 1880 census, the population of Mono County was 7,082, and most of those people lived in Bodie.

Died: In the early 1880s, miners began moving away to seek fortune elsewhere. The town gradually wound down, and in 1942 the last mine was closed.

It lives on: Landowners hired caretakers to mind the still-intact buildings, and in 1962 the town became Bodie State Historic Park. Tourists walk the dusty streets and can even enter some of the buildings. The entrance fee is $7 for adults, $5 for children ages 6 to 16 and free for younger children. Various private tours are offered, including a potentially spooky twilight walk. 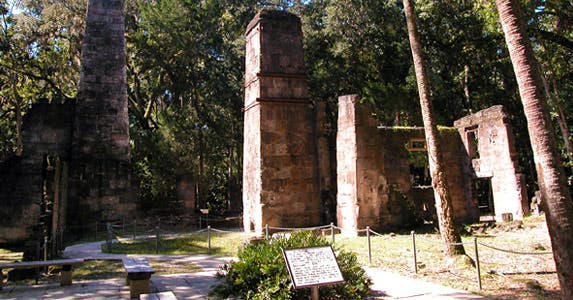 Born: Charles Bulow bought almost 4,700 acres in 1821 and established a plantation where he grew sugar cane, cotton, rice and indigo. His son, John, built the area’s largest sugar mill out of the hardy local coquina rock.

Died: John Bulow’s alliance with the Seminole Indians was fractured when the United States tried to force the Seminoles to move west of the Mississippi River. This attempt at ethnic cleansing started the Second Seminole War. In an 1836 skirmish during the war, Seminoles burned Bulow’s plantation and mill, and they most likely freed his slaves.

It lives on: Now called Bulow Plantation Ruins Historic State Park, the coquina-block ruins still stand amid live oak trees and not far from housing developments. The entrance fee is $4 per single-occupant vehicle; $5 for two occupants; and up to $10 total for eight occupants. 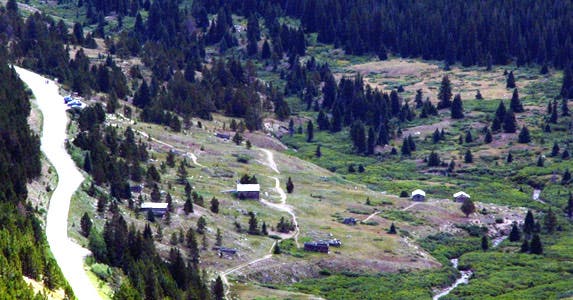 Born: On July 4, 1879, prospectors discovered gold more than 10,900 feet high in the Rocky Mountains, near what is now Independence Pass. The population quickly swelled to around 300 and kept growing. In 1882, the town had about 1,500 residents.

Died: The altitude brought cold winters, and miners decamped to nearby towns at lower elevations where the climate was milder. Almost all the residents deserted Independence during the brutal winter of 1899. Soon the town was empty.

It lives on: The Aspen Historical Society offers tours from mid-June through Labor Day. Suggested fee for adults: $3. Gold is still in them thar hills: Open mining operations have resumed nearby. 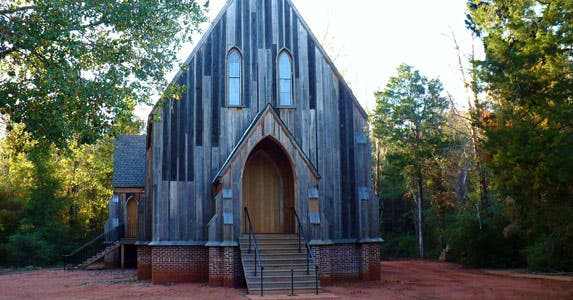 Born: American Indians likely occupied the area for millennia. When Alabama achieved statehood in 1819, President James Monroe set aside 1,620 undeveloped acres beside the confluence of the Cahaba and Alabama rivers for the state’s capital. A brick capitol building was erected in 1820. But a yellow fever epidemic swept through, and critics blamed the town’s low elevation and complained that it was flood-prone.

Died: Legislators moved the capital to Tuscaloosa in 1826. Soon, the town was almost deserted. But it came back twice: first, as a center for the trading and transport of cotton and then, after the Civil War, as a village for freed slaves. Eventually the residents drifted away to Selma and other nearby cities. Cahawba was permanently abandoned by 1900.

It lives on: Now known as Old Cahawba Archaeological Park, the town is managed by the Alabama Historical Commission. Admission is free. Visitors stroll through the ruins, a cemetery and a nature trail. Guided tours are available for a fee. 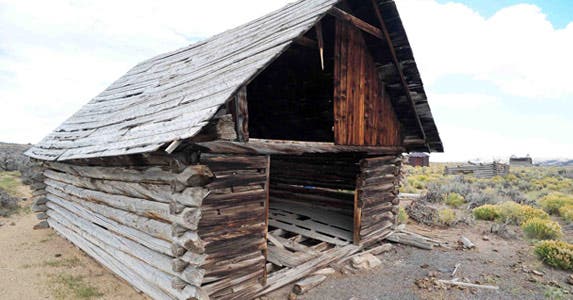 Born: Mormon pioneers established Piedmont around 1867 to supply wooden ties for the Union Pacific Railroad. The town grew as a base for construction of a steep, winding railroad bed and the laying of tracks, and then as a station where steam locomotives could refuel and take on water. Five kilns were built to provide charcoal fuel for the steam trains. The town grew to about 20 houses.

Died: In 1901, the Union Pacific dug a railroad tunnel through Aspen Ridge, several miles from Piedmont. The rerouted tracks allowed the railroad to increase traffic but at the expense of Piedmont, which lost its economic locomotive. The last resident died in Piedmont in 1949.

It lives on: About 40 kilns were built in Wyoming during that era. Of Piedmont’s five sandstone kilns, three complete ones remain. They are conical and about 30 feet in diameter and 30 feet high. During railroad days, pine logs and quaking aspen filled the kilns, which rendered the wood into charcoal. Now the site is known as Piedmont Charcoal Kilns State Historic Site. Admission is free. 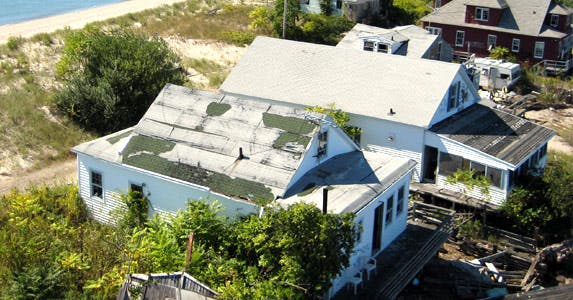 Born: The 63-acre peninsula on Long Island Sound is connected to the town of Stratford by a narrow stretch of beach and used to be connected to Bridgeport by a wooden bridge. In 1892, an amusement park was built on the peninsula. The amusement park, called Steeplechase Park and then Pleasure Beach Park, was closed in the 1950s. About 45 beach cottages remained.

Died: The wooden bridge from Bridgeport was Pleasure Beach’s only access by motor vehicle. The 250-foot-long bridge burned in 1996 and has not been rebuilt. The only other ways to get to Pleasure Beach are by boat and by walking or biking a 2-mile strand of beach. The vacation cottages have been abandoned. 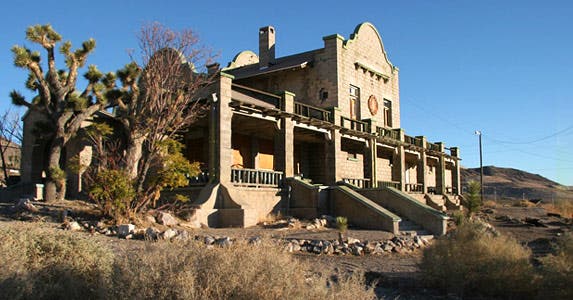 Born: Two prospectors found gold in an outcropping at Buck’s Springs, just east of Death Valley, in August 1904. Soon there were mining camps scattered among the hills, and one of the camps, Rhyolite, grew faster than the others. By 1907, it was a thriving mining town with a population estimated to be as high as 5,000. The town had a railroad station, a three-story bank building and a two-floor schoolhouse, plus the “Bottle House” made from 50,000 beer and whiskey bottles.

Died: The gold mines weren’t as lucrative as assayers had originally hoped they would be. The biggest mine was closed in 1911. The power company cut off electricity in 1916. With little economic activity to sustain the town, residents moved away. The last resident died in 1924.

It lives on: The Bureau of Land Management administers the land as Rhyolite Historic Townsite. The bureau put a new roof on the Bottle House and repaired the porch and walls a few years ago. The bureau would like to convert the old railroad depot into an interpretive center. The ruins of the Cook Bank Building were shot in the 2005 movie “The Island.” 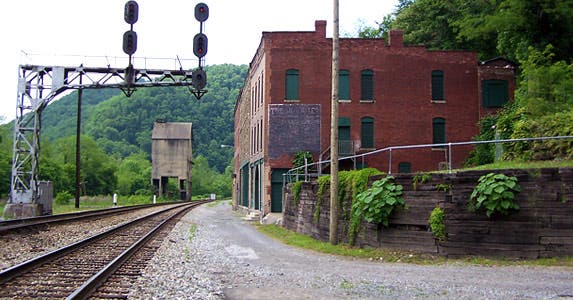 Born: In 1873, the Chesapeake and Ohio Railway began transporting coal extracted from the New River Coal Field in West Virginia. C&O built a rail yard on the spot that became Thurmond, and coal from surrounding mines was shipped through the town. By the early 1900s, Thurmond was booming. The town straddled the New River: Alcohol was banned on the side with the railroad tracks, and saloons and brothels flourished on the other side.

Died: The 100-room Dun Glen Hotel, on the wild and wooly side of town, burned in 1930, and the town began a slow decline. The advent of diesel-powered locomotives rendered the railroad yard less important. Most residents moved away.

It lives on: Thurmond is a ghost town that’s not completely dead. As of a few years ago, the town had seven residents. The National Park Service maintains the railroad depot (open June through August) as a visitor center for New River Gorge National River.