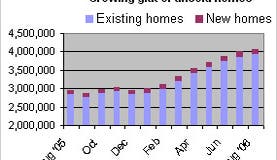 House prices are falling in much of the country, and a report by Merrill Lynch says a record 2.2 million single-family homes and condos are on the market — almost 1 million above normal levels.

You can increase your chance of selling your house in a reasonable time by following a few good guidelines.

1. Play the cards you’re dealt.
A successful poker night begins before you reach the table, when you resolve not to chase after hands that you have no realistic chance of getting. Similarly, a successful home sale begins before the house is listed, when you decide not to expect to make a killing.

“All you can do in a falling market, if you have to sell, is have the best possible product out there at the price it should be,” says Diane Saatchi, an agent with Corcoran Group in East Hampton, N.Y. “Not what you wish you could get, not what the neighbor got two years ago, but at the price you should get now. That’s the reality.”

It takes discipline to face that reality. Humility, too. For many sellers, “the only disappointment is that their friend, six months or a year ago, got more than they’re getting,” says Bill Christiano, a loan officer with MortgageIT in White Plains, N.Y. “Ego gets in the way when they’re trying to sell. Or stubbornness, I should say.”

2. Scope out other houses for sale.
Break through your ego and stubbornness by looking at the good deals that your neighbors are offering. “The most important thing is to really shop the competition on the market right now,” says Elizabeth Razzi, author of “The Fearless Home Buyer,” published in 2006, and of “The Fearless Home Seller.”

Put on your shopping shoes and look at everything from a buyer’s viewpoint. “Get out in the car and spend a weekend looking at everything you can,” Razzi says. “Visit some weekend open houses. Just get a feel for what your buyers are looking at.”

Visit newly built houses and find out which amenities and incentives builders are offering. Eavesdrop on other visitors to open houses to find out if there’s something in particular they’re looking for — something you should do to make your house more presentable.

3. Make it a turnkey, not a turkey.
The word “turnkey” is used in commercial real estate. It means a property is ready for immediate use. Your house has to be that way when buyers have a cornucopia of houses to choose from. “You have to make it a 100 percent turnkey situation,” Razzi says. “Everything has to be ready to roll, because buyers never want to buy a house that needs a lot of work unless it’s an absolute bargain. You have to take away all their opportunities to say no.”

Saatchi says that when buyers outnumber sellers, you can get away with selling a house with ratty carpet, smelly furniture and walls that need painting. The market was like that two years ago, but not now. Saatchi suggests hiring a house inspector before putting the house on the market. “Know now, and fix it,” she says.

Bursting of a bubble

4. Offer incentives.
After you have put your head on straight, spied on the competition and fixed up your house, it’s time to figure out what goodies you will dangle before buyers and their agents.

Besides a low price, incentives for buyers include paying discount points to lower the mortgage rate, paying closing costs or providing flexibility about the move-in date.

Consider offering a premium to the buyer’s agent. Add a half-point or a point to the commission, or give the agent a cruise or a big-screen TV. “It may not cause the deal to happen, but it can just attract a little more attention and make your deal stand out,” Razzi says.

Don’t mix up incentives to buyers and their agents. Buyers focus on price and the house’s amenities, so buyers’ incentives should address those issues. A Caribbean cruise is a distracting gimmick to a buyer but might be an attractive incentive to a broker, Razzi says.

5. Price realistically.
Finally, “Don’t get greedy,” says Pam O’Connor, president and CEO of Leading Real Estate Companies of the World, a national network of 700 regional and independent firms. “Just because it went up to some astronomical value and it went down from there, you have to be realistic that there has been moderation in the market.”

It takes research, often conducted by a real estate agent, to come up with a realistic asking price, and discipline to abide by it.

It’s important that you, as the seller, understand the dynamics of pricing enough to build a defensible argument. It’s not enough just to throw out a figure,” says Mario Villena, vice president of sales and marketing for HomeKeys, a Miami-based online real estate brokerage.

Using tools on sites such as HomeKeys, Zillow and Redfin, buyers can get an accurate idea of your house’s market value. You and your agent can’t bamboozle buyers because they have so much information about comparable house values.

In a seller’s market, sellers typically ask for 10 percent to 20 percent more than they expect to get, Villena says. You don’t have that luxury in a buyer’s market, and Villena suggests asking for just 3 percent to 5 percent more than you realistically expect to get. Setting an aggressive asking price attracts more prospective buyers to your door, discourages lowball offers and saves negotiating time. “You’ll know fairly quickly whether they’re willing to meet you or not,” Villena says.

In a market where prices are falling, asking prices must fall, too, “which is a whole new concept for sellers right now,” Saatchi says. For example, if the Smiths sold their house early this year for $700,000, you might have to ask just $695,000.

An agent has to have tact to break the news, Saatchi says: “When we tell our clients this, they think we are the devil.”