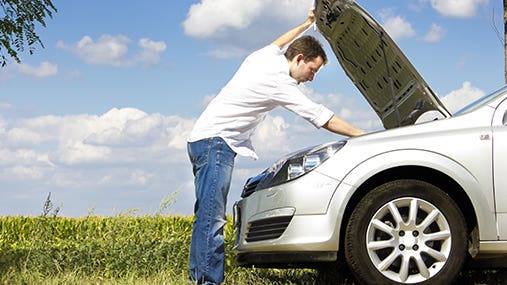 Noises are just part of operating a vehicle.

Tire treads hum against the asphalt, wind whistles as it passes around outboard mirrors, plastic bits and pieces in the dashboard generate little squeaks as they rub together and so forth.

Most of us don’t even notice these harmless notes after a while. But some noises aren’t so innocuous. You should not ignore certain thumping, banging, clicking and squealing sounds. These sounds often rear their heads or intensify whenever the driver takes specific actions such as stepping on the accelerator, depressing the brake pedal or turning the steering wheel sharply.

Listen for these noises. If any suddenly becomes part of your everyday driving experience, it’s time to take action. Something is probably very wrong. Ignoring the symptom won’t make the problem magically go away. Delay can provide the time for a problem to worsen, and that usually translates into a bigger and more expensive repair.

Here are some of the more common noises that can spell trouble and their possible causes:

Any sound when turning a corner: More than likely this is related to the steering linkage. It either needs lubricating, or is damaged and requires replacement.

Clunking when braking: A brake caliper or other hardware is damaged, missing or improperly mounted.

Flapping: This could either be something interfering with the fan or a belt disintegrating.

Grinding manual transmission when shifting: This is probably a clutch issue. It is either worn or requires adjusting. It could also indicate a deeper problem within the transmission.

Knocking in engine compartment: It’s a myth that there are benefits from using a higher-octane gasoline in your vehicle than the owner’s manual specifies; however, using a lower-grade fuel can very well produce engine knock. Follow the owner’s manual requirements in all things oil, gasoline and tire air pressure.

Loud bang: If the sound is as if someone put a cherry bomb in your tailpipe, it’s a backfire. It could be the air-fuel mixture is too rich. It could also indicate that the catalytic converter isn’t functioning properly.

Low-pitch humming or whirring under car: This could have any number of causes. If it changes with acceleration, the differential may need lubricant, the transmission may be failing, the universal joints may be worn or a wheel bearing could be shot. The problem is, the sounds under a vehicle tend to reverberate and echo to the point that it’s impossible for a lay person to determine the source.

Popping in engine compartment: An array of issues could be responsible, particularly if the sound is accompanied by some engine hesitation. The checklist includes ignition problem, clogged fuel filter, worn or dirty spark plugs, damaged spark plug wires or a compromised catalytic converter.

Rattles from beneath the vehicle: It could be a loose exhaust system or even loose brake pads.

Roaring that increases with acceleration: The first thing to check is the exhaust system; it could be damaged. Transmission issues could be another cause. In an automatic, perhaps it’s not advancing to the next gear. With a manual transmission, the clutch could be slipping.

Squealing or chirping on acceleration: This usually indicates a belt or belts are loose and slipping. It could also mean the drive pulley for an accessory such as the water pump has become misaligned.

Squealing wheels when applying brakes: This could have a number of causes from something as simple as dirt on the brake rotors, pads or shoes to something more ominous, such as badly worn pads or shoes. It could also be from a wear-indicator on a pad signaling that it is time for new brake pads. No matter the cause, it’s a safety issue and requires attention.

Scraping or grinding when applying brakes: If the squealing has turned into scraping, that usually indicates bare metal rubbing against bare metal. The brake pads are shot! Every application of the brake pedal is damaging at least one of the rotors.

Tapping or clicking in engine compartment: The most obvious problem — and easiest to remedy — is that the engine is low on oil. Check the oil level. If that is OK, the problem could be a loss of oil pressure somewhere in the system. It could also indicate some blockage due to crud in the system. If it’s not an oil issue, more than likely it’s related to the valve train. The valves may need adjusting or perhaps the lifters are collapsed.

Whining: This can often indicate excessive differential or transmission wear.