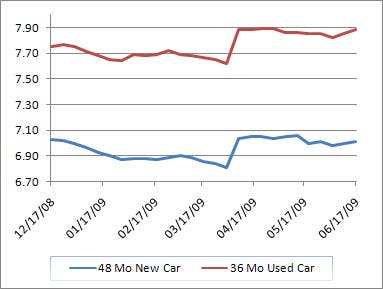 The Federal funds rate, from which the prime rate is derived, is the target rate set by the Federal Open Market Committee. Since December 2008, the rate has been at a range of 0 percent to 0.25 percent.

Ultimately, the actions of the Federal Open Market Committee, or FOMC, affect the cost of funds. Changes to short-term interest rates affect how much banks pay to borrow from each other overnight and also the interest rate they pay their customers.

“For example, let’s say there is a cost of funds of 2 percent. Then (the) treasury assigns a cost of funds of 3.5 percent to the indirect lending department. Then the indirect lending department within that bank has to assign their own; they have to build in the cost to run their unit,” says Lee Domingue, chief executive officer for Indirect Lending at Wolters Kluwer Financial Services.

“If there is 3 percent, or 300 basis points, that it costs that indirect lending unit to operate, they in turn will assign a dealer buy rate of 6.5 percent,” he says.

All the variables of what it costs the bank to operate goes into the cost of funds, and then what’s called a rate card is built. “What that does is assign dealer buy rates based upon credit tranches, or credit scores,” says Domingue.

Borrowers with the highest credit scores get the best rates. As credit scores go down, risk increases for the lender and loans are priced accordingly.

Lenders constantly update their rates to reflect their cost of funds, but they’re also pressured by market forces and the need to stay competitive.
According to Domingue, in a rising interest rate environment, lenders can sometimes leave interest rates on car loans untouched. “But they can only do that for a season,” he says.

In the current environment, with rates as low as they can go and the FOMC not expected to make any moves in the immediate future, lenders have been responding more to credit risk, which has increased as the market has declined.

“In order to be competitive in today’s climate, you have to have the ability to manage that process through technology, but you have also have to be able to accurately price your credit risk on an ongoing basis in real time because — this is something really important — a credit score of 700 five years ago performed one way. That same credit score now may perform like a 660 score,” Domingue says.

“Unless they have the technology and the ability to manage that process, they can still be pricing believing they have a 700 credit score, but the delinquency and the loan loss really mirrors a 660 credit score,” he says.

Consumers can’t control the economy or the Federal Reserve, but they can control their credit score, and that is often much more important when it comes to getting a good price on a loan.
To save the most money on a car loan, work on raising your credit score as much as possible.

It’s not something that can be done overnight, but most people don’t make major purchases on a whim either. Pay down debt and pay your bills on time, and that will have a greater impact on the price you pay for an auto loan.

“The moral of the story is to pay your bills on time,” Domingue says.