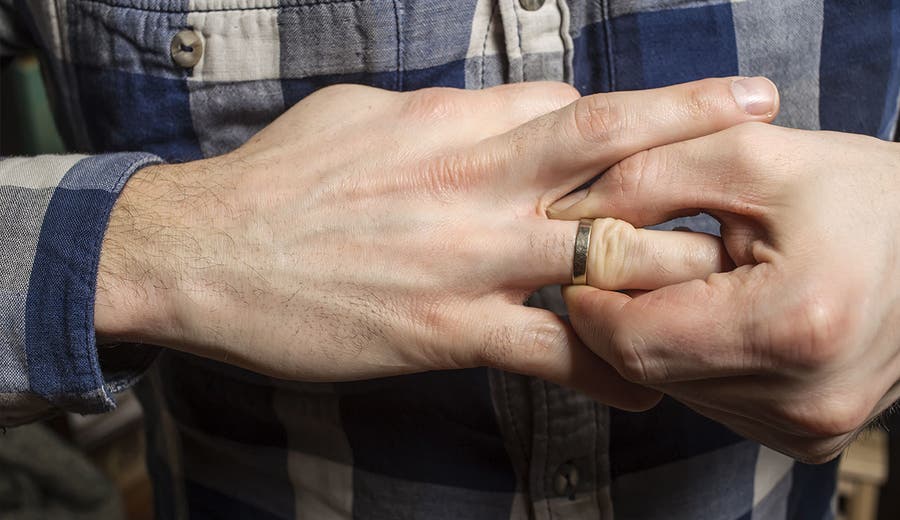 If you’re going through a divorce, you may be asking yourself, “who is responsible for debt after divorce?” It’s common to intermingle your finances, open joint credit card or loan accounts, or purchase a home when you’re married, which can make it tough to figure out what happens to that debt in the divorce.

Determining who is responsible for certain debts is an important — and at times frustrating — part of the divorce process. Luckily, with a little research, you can figure out divorce and debt responsibility without making a tough time even more difficult.

What happens to debt after a divorce?

If you accumulated a lot of debt during your marriage, it’s important to understand what happens to debt when you get divorced. You may not be responsible for things you think you are, and you may owe on debt you were sure your spouse should cover. Ultimately, a lot of the legal responsibility will come down to whose signature is on a loan paper and whose name the loan is under.

Is one spouse responsible for the debts of the other? Well, it depends. If you signed on a loan as the borrower or if you cosigned a loan for your spouse, you are legally liable for the debt that accompanies it. Any late fees charged due to a spouse’s delinquent payments will also legally be your responsibility — even if they tell you that they’ll take care of it. If your name is on the loan, you owe the money. It’s that simple.

Let’s say you took out a loan for your partner with the agreement that they would pay it. You may both agree that the person who said they’d pay the loan is the one who owes on it after the divorce, but that agreement may not hold up in court if you’re the sole borrower.

Debts owed to insurance companies follow a similar protocol. If your name is on the loan as a borrower or co-signer, you owe it.

How to separate assets

An important step in safeguarding your finances is to separate your assets, but doing this isn’t always as easy as it sounds.

A prenuptial agreement — or a “prenup” for short — is an agreement in which both parties state that they are only entitled to the assets they brought into the relationship in the event of a divorce. In other words, they do not split assets when the marriage ends. The same asset stipulation can be made by signing a post-marital agreement, but spouses agree to this kind of contract after getting married.

While both of these agreements are useful in keeping assets separate, they may not protect you from shared debt that was accumulated while you were married.

You can also secure your finances by investing your money in protected accounts. If the question: “Am I responsible for my husband’s debts if we divorce” haunts you, you might want to sock money away in retirement plans, trusts, corporations or annuities where your money is likely to be safe from the other party.

While doing this may help safeguard your assets, it’s still wise to consult a trusted financial advisor before committing to such a plan.

How you protect your money during divorce

If you’re worried that one spouse is responsible for the debts of the other during a divorce, you should find a way to protect your money during the divorce process. Couples often create joint debt while married, and the “what’s mine is yours” mantra can backfire if they decide to divorce.

If you want to protect your finances during your divorce, it would be wise to stop using joint credit cards so that it’s clear who the debt belongs to. If possible, you should close down joint accounts entirely.

Try to get your name taken off of any joint credit cards or remove yourself as an account cosigner. This can be difficult, though, because some credit institutions prefer to have two sources of income attached to an account. In such cases, make sure to keep track of spending activity so that you can demonstrate who is responsible for the debt.

If possible, try to pay down as much community debt as possible before entering into divorce proceedings. Though this may seem unfair, practicing sound divorce debt consolidation before moving forward with the actual divorce can make it easier to determine which party is responsible for the debt.

Will divorce impact your credit score?

Your credit score is impacted by your financial habits, such as paying off personal debts and the amount of disposable income to credit debt, and the actions taken jointly during your marriage can affect your score as well. If you take out a joint loan on a home or open a credit account together, you are liable for any financial delinquency on that debt. If your spouse was supposed to pay off debt and forgot to do so, the penalty from the late payment will affect both of your credit scores.

Try to remove yourself from joint accounts to protect your credit score from irresponsible actions by your former partner. Make sure that any outstanding debts get paid off as well. It can be tricky to get your name off of credit that you signed for with another party, but you can try to refinance your existing loan to make just one person responsible for it. That may not work in every case, but it’s worth a try.

Divorce is usually full of red tape and unpleasant legal proceedings, and figuring out how to split up debt isn’t going to make the process any more enjoyable. Take the necessary steps early in your divorce so that your credit score is not impacted. Pay off as much joint debt as possible, get your name taken off of joint loans and separating your assets. Doing so will prevent a lot of financial problems that could end up plaguing you post-divorce if you ignore them.